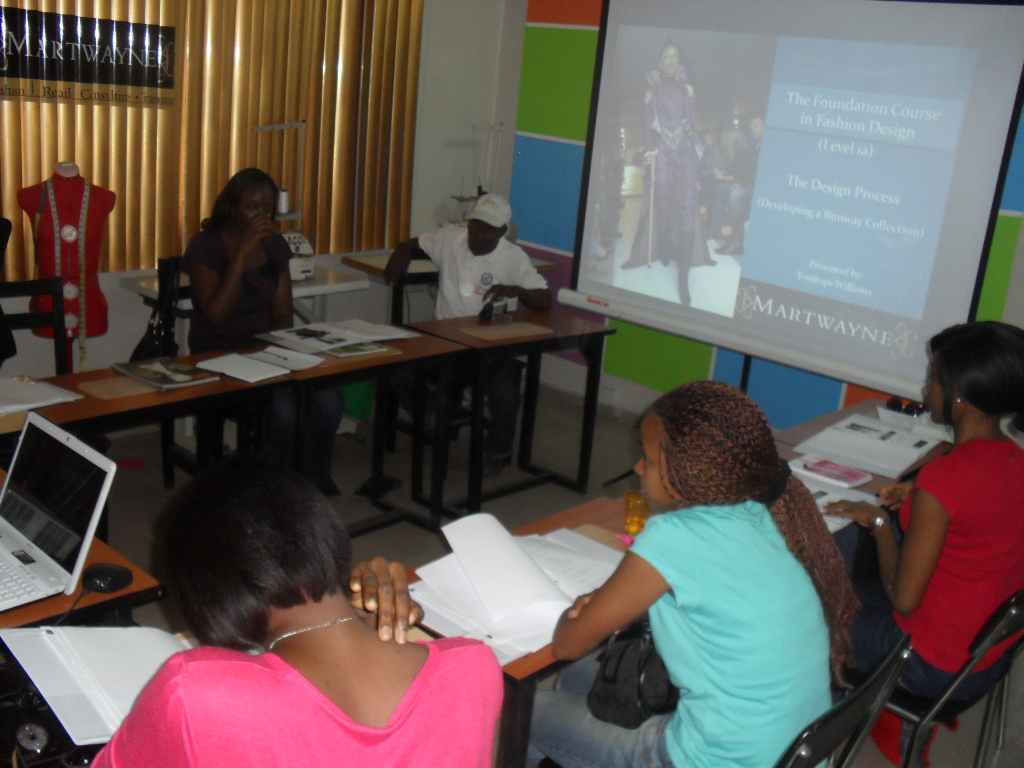 In a daring and quite risky move that typifies the entrepreneur, Tope Williams-Adewunmi resigned from a promising career in KPMG to spend three long years in fashion school, and the rest, as they say is history. Mrs Adewunmi has carved a name for herself in the Nigerian fashion industry. Like a star, she shone right from when she made her impressive entry; and was awarded the 2010 Exquisite Lady of the Year (ELOY) Award for Best Designer (Newcomer). Armed with an in-depth knowledge of the industry, she has risen from being an accomplished fashion designer to a self-styled service provider in the industry – advisor, trainer, motivational speaker.

She is the CEO of Martwayne, a fashion retail and training outfit that is about giving people ‘power through fashion’. On the Martwayne blog she magnanimously shares knowledge, ideas and skills necessary to run successful fashion businesses. You just need to hear her talk passionately about how to turn your love for fashion into money-spinners. She is well read, with a BSc in Economics from Obafemi Awolowo University (OAU), and a BA in Fashion Design from Future Excellence Design Institute of South Africa (FEDISA), Cape Town, South Africa coupled with a Higher Diploma in Management from the Australian Business and Retail Academy (ABRA). T.Williams, as she is fondly called, has been awarded severally for her efforts at human capacity development. She is presently an approved trainer with the National Youth Service Corps (NYSC) under the Skills Acquisition and Entrepreneurial Development Scheme, Lagos State Chapter. She likewise won an award for Supporting Headroom, a Youth Empowerment Program in Abuja.

Here, she shares her intriguing entrepreneurial story in the revealing interview.

What informed your decision to go into fashion?
I got sick and tired of my tailor always wrecking my clothes and I told her I would go and learn how to sew so I could come back to teach her! That was it! No it was never the story of “Oh I had always loved sketching when I was a child… Blah blah…” In fact I could not draw a straight line without a ruler or even thread a sewing machine when I went to fashion school. I learnt everything from scratch – including the creative aspect!

I made the decision to go into fashion in November 2005 but eventually left for fashion school in February 2007 for 3 long years! Yes I went back for an undergraduate degree program in Fashion Design in Cape Town – a place where I did not know a soul. Fashion school was tough and living in a strange city was tougher and sometimes I wanted to pack it in. After all, my boss at work said I could always return if I felt fashion was not for me but well, I stuck to it!

So, how did you then evolve into a fashion entrepreneur?
Well, after fashion school I was back in Lagos brimming with knowledge and ready to do my thing. Starting the fashion business was tough and I made a lot of mistakes and spent so much money I did not even know I had because I was a hustler! Lol.

I was listening to people and doing what they felt I should do, but deep down I was not happy. I tell you “there is nothing worse than loving what you do but not enjoying it” – I came up with that because of how I felt! Yes I had done a fashion show, yes it was successful, yes I was in the papers, on TV etc but I was miserable and felt unfulfilled and worse – all well and good to be all over the place but totally pointless when your bank account was not reflecting it!

Don’t get me wrong, there was money to be made from sewing for people but the cost of production was too high. Anytime I charged a high price, I was not happy because my target market was not the rich; but I could not do otherwise if I wanted to remain in business. My original plan for going into fashion was to create affordable clothing which could only be done through retail not bespoke. Anyway, when things became unbearable, I stopped bespoke and business altogether and took a 3 month break and attended Fate Foundation – a business school – because I needed to understand how Nigerians think. I was done with it after 3 months and I wanted to start my retail business, but alas! My tailor spoiled one of my samples and I was like “you know what? I think I will start training beginners on how to sew so at least I can teach them the proper way from scratch so I can pass work to them”. And that was how my Training Center was born – by accident.

I also started noticing that people were having problems with their fashion businesses so I started to advise them and develop courses that could address their issues. I also started a blog as my voice to the industry so I could change mindsets and reach out to designers on various areas of fashion entrepreneurship; I wanted to highlight the mistakes they were making based on my fashion knowledge, my accounting background and my own experiences. I also made my BBM available to people who just wanted to lament. It has really helped a lot of people.

Well, I have been doing that ever since and I love it. It has been rough and pretty tough but I am thankful! I enjoy what I’m doing, more importantly I am adding value to people, and that is what running a business should be about! It should never be all about the money, but about what you are doing to make a difference.Anytime I reach another milestone, I feel a great sense of achievement knowing I built everything from scratch and more importantly, I offer a service strangers are willing to pay for! That is the best feeling ever!

How did you come about the name – Martwayne?
Well I was looking for something different and initially came up with Maniere & TWayne. Maniere was my modification of the French and Spanish words for fashion (manera) and TWayne was a nickname I was given by a friend which kind of stuck – the TW being my initials. So it pretty much means Fashion & Tope Williams. It took me three months to come up with it.
Sadly, many people could not pronounce it so I decided to merge it into something that would be easier to pronounce and Maniere&TWayne became MARTWAYNE (Still with the same meaning Fashion & Tope Williams).

Your training and advisory business model that’s filling a gap in the industry, is it new? Would you say that your bridging it was a new thing or did you just take a different approach to it?
No I don’t think it was new. There are many training programs in the Industry. I guess it was my approach to it that made it work. Most trainers only focus on the aspect of production but for me with my accounting background and the knowledge gained in fashion school, I made people realize that there is a whole lot more to fashion than mere sewing. I realized that the major reason many aspiring and even practicing designers were facing huge challenges was because they did not really understand the process.

So I spoke about the theoretical, the creative, the practical and most importantly the business aspects of fashion, a lot of which sounded pretty foreign to the designers I interacted with. I addressed issues I guessed they would be facing in their businesses and how to solve them on my blog without even realizing that many people who had that problem thought it was unique to them. For them, it was a major relief and therapeutic knowing the problems they were facing were not unique to them and more importantly, finding someone who understood what they were going through and who could point them in the right direction. I made my Blackberry open to people and a lot of people I chat with do not know me – but I am happy to help out, even if just to offer a listening ear… well in this case… a “reading eye”. What, in your opinion constitutes the greatest needs of the fashion industry at this time?
Oh, they are many but I would say the biggest need of the industry would be proper support structures for the average fashion designer. Many designers and fashion entrepreneurs are left to figure things out on their own which leads to frustration and many just give up – which is very heart-breaking.

Running a fashion business is tough but it would not be as hard if there were clinics, resource centers and production hubs designers could go to for help. If for example, there was a production hub, then the average designer would not need to set up production units and run huge costs which eat into their very low margins. Many designers struggle to meet the demands of their work and even charge appropriately for their work. But if these structures were in place, it would make life so much easier and even help promote specialization within the industry which will inevitably build stronger fashion businesses and move the whole industry forward.

Your advice for upcoming entrepreneurs
For those who are at crossroads or who are thinking of what to do, I can tell you for free that you will find out what you will do and enjoy doing by accident! It is not about looking at what someone else is doing but it comes from within you with God’s guidance.

And when you find that thing, don’t just jump into it. Do a lot of research and get the relevant knowledge required to excel in that field! I can list like 20 opportunities in the fashion industry other than sewing – in fact I don’t sew and I am still in the industry! The best part is I do a lot with my fashion knowledge and play in both the fashion industry and the business community. How?! Because I invested 3 years of my life getting the knowledge so I thoroughly understand the industry!

When you get the knowledge, don’t wait for the perfect terrain or be scared to make mistakes. Just do it! You will perfect it as time goes on!

Some of your notable work as a fashion entrepreneur
I have been a speaker at various events, both as a motivational speaker and as an educator. A notable one was being an entrepreneurship educator of the University of Lagos and Yaba College of Technology, which was a University of Central Lancashire, UK initiative in collaboration with the Entrepreneurship Schools of the Institutions.

I have a platform for designers which I initiated called the Designers Connect Network as means of merging the fashion industry with the business community by bringing designers in contact with businesses and contacts that can help move their businesses forward.