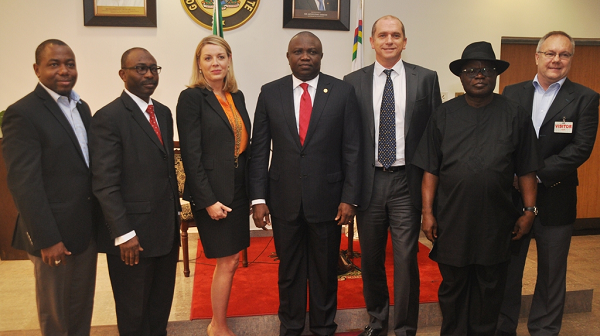 Last Thursday, the governor of Lagos State, Mr. Akinwunmi Ambode, assured a delegation of Walmart executives that he was ready to give the necessary support to assist the firm in establishing its presence in Lagos.

Ambode said the presence of the Walmart brand in Lagos would go a long way not only to create jobs for the teeming youths, but also boost the economy of the state.

The Head of the Walmart delegation, Ms. Shelley Broader…who is the president and chief executive officer of Walmart’s Europe, the Middle East, Sub-Saharan Africa (EMEA) region acknowledged the investment opportunities that abound in Lagos state saying:

“We are incredibly excited and proud to be in this exciting state of Lagos.

Just looking at the burgeoning economy and at the growth in this market is very exciting and now Walmart operates around the world in 28 countries and our mission is to lower the cost of living, to help people save and live better.”

But not all Nigerians received with enthusiasm, the news of Walmart berthing in Lagos.

Here’s what they’ve been saying on social media:

“I think it’s a good idea because I’m looking at it from the job creation angle. Whenever I shop at Spar (their prices are too high by the way), Shoprite and other stores, I look at the cashiers and other sales rep and ask myself, what business could have provided this job for them.” – Amaka

“It’s good in the sense that it’ll create more jobs. I don’t like Walmart though. They are overpriced and do not treat their employees well.”– Damilola

“Walmart in the US is an everyday kinda store but in Nigeria due to the socioeconomic climate, it’ll be a high end kinda store. My fear is, in the future, Walmart in Nigeria might be a dumping ground for substandard products since quality control in Nigeria is nonexistent.” –Ugo

“Considering that Walmart exploits their American workers to the fullest…they’re going to feel as though Naija is heaven! More jobs can never be a bad thing, unless they are jobs in Boko Haram.” – Kunle

“Bad!! What is wrong in developing our own Ebeanos and Edichart? These companies come and milk us dry. They take all our money back to their land and we end up with nothing. Africa should open their eyes o!” – Ibifuro

“At the end of the day only 1 percent of Nigerian will access the store. They will come and kill small businesses who are trying to get themselves out of poverty. I hate the idea. frown emoticon” – Daba

“This will for SURE kill indigenous businesses. These big retail giants don’t do anything or give back to the community where they operate. No social development. I’m just thinking maybe our brothers could find jobs to bring the crime rate down?” – Ebere

“I am on the fence on this one. I can see the good and the bad! Mixed feelings. In ten years from now, will we still be happy Walmart is in our midst?” – Ikenna

“Great idea. They better site one close to my property!” – Tony

“We can develop our own business and create jobs. We can give businesses government incentives to build up our own initiatives. I tire for Africa we will always have our colonial mentality. White man is better than us.” – Ebi

“Very very bad what will happen to us importers? Moreover, this governor is selfish sha o. He is looking for long term royalty even after office when he has not even served. I wish I never voted for him.” – Ade

“You’ll be shocked they’ll be highly over priced!” – Linda

“Their prices never remain the same once they enter Nigeria. It’s bad that the Nigerian government has no policy in place to protect Nigerians. Which indigenous brand has the government ever promoted?” – Ify

“Chinese/Indians/Lebanese are everywhere importing the same goods we were once representatives and this is because they get cheap funds from their government.” – Esiri

“From the job creation angle…it looks good. But we should know by now that such big shops create jobs not wealth. I’d love to see more of Next Cash n Carry Shop (owned by a Nigerian and provides for Nigerians) not the likes of Shoprite, Walmart and co. Behind the scenes, they still do foreign exchange racketeering. One more thing going on here…the craze to move into our market is not because they overly need to make life easier; but because the junk killing most of them there will be shipped into Nigeria.” – Eze

“Boom!!! Most of the rejected low quality products rejected by Americans will be dumped in Nigeria and looking at the job creation factor, the only jobs our people will be getting will be security officers, cashiers, cleaners etc. Meanwhile, other bigger decision making jobs shall rest with Walmart. To hell with them jare!! They should NOT come to Nigeria. This is colonialism repackaged wth a bow on top!!!!” – Rufus

“Abeg Nigeria is not a refuse bin!” – Stella

“I would say great idea!” – Obiora

“We are not talking Nigerians, we are talking Lagosians. If they dump rejects in Lagos, it’d be their loss because what they’d stock, are already in Lagos markets; original and fake. So either way, they’d face stiff competition. Their only way out, would be original at reduced prices. My thoughts.” – Nene

“A Walmart employee in US/Canada earns $10/hr working 8 hrs a day, 40 hrs a week thats $1,600 a month before taxes but in Nigeria you can be sure they will be working 12hrs per day, and take home a mere 15k a month without benefits. I call this economic slavery repackaged. Noooooo to Walmart!!!” – Ubong

“It’s not just the rejects they produce; from clothing to furniture, household items, food stuff… everything. In short, so our smaller shops cannot grow and you don’t want to know the peanuts they pay their staff here. They are also big time slave drivers. For instance, a cashier in America earns at least $500- $700 everymonth. But they pay our people about N12, 000 and supervisor N 25,000…which is less than a hundred dollars a month and without benefits. It’s a bad idea if you ask me.” – Isa

“You can’t boost a nation’s economy by choking the life out of its local industries and manufacturers. When will those people we call leaders learn? I give up!!!” – Praise

“I doubt there are many jobs that pay salaries that equal that of their counterparts outside the country albeit more working hours here. It’s sad but that’s the reality. We don’t labour law or effective labour union that addresses these inconsistencies. It’s not Walmart, it’s the system that we already have. Walmart won’t come to change that.” – Nneoyi

“Please what’s Ambode’s motive? He wants to be another Obafemi Awolowo where his family still collects royalties on all investments?” – Ethel

“One day, I was in a store in Canada looking to buy tin tomatoes. Another white guy was looking to buy the same. When I discovered the product, I showed him where they could be found. They were two brands; an imported one that cost less than the one made in Canada that cost more. Trust me na, I picked the cheaper one as a Naija babe but the Canadian guy picked the more expensive one just because it was made in Canada and he wanted to patronize his country’s products. Never before have I seen such patriotism; a word which an average Canadian can’t spell. Wish our people could boycott imported goods and buy our locally manufactured ones but then who am I kidding?” – Onome