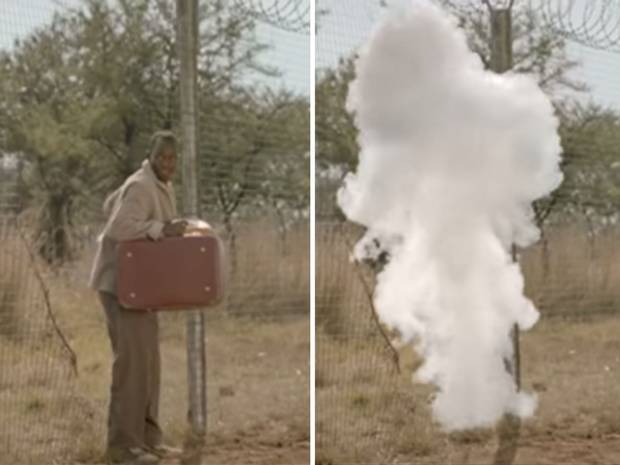 The annual day this year marks 21 years since South Africa’s first democratic elections, and comes amid violence in the major cities of Johannesburg and Durban which has killed seven people in the past three weeks.

The anti-immigrant unrest followed alleged comments by Zulu King Goodwill Zwelithini, who said that foreigners need to “pack their bags and leave”. He has since denied inciting violence, and blamed the media for misrepresenting his remarks as he called for calm.

But a Ministry of Foreign Affairs has said in a statement that property has been destroyed and the violence “created fear and uncertainty in the minds of African migrants.”

Released in 2012, the Nandos advert lampoons simmering anti-immigrant feelings in the diverse nation. At the time, several TV stations including the state-owned South African Broadcasting Corporation refused to run it, according to BBC News.

“You know what’s wrong with South Africa? All you foreigners. You must all go back to where you came from,” the advert’s voiceover growls as immigrants disappear in puffs of smoke.

“Real South Africans love diversity,” the advert, which has garnered over 1.7million views, declares as it unveils two new dishes.

The government last week postponed Monday’s annual Freedom Day National Awards ceremony, during which South Africans and foreigners who have contributed to the country are honoured, in order to allow the country to mourn those who had died in the violence.

Demonstrators carry placards during a march against xenophobia in downtown Johannesburg (Image: Reuters)
In a statement Sunday congratulating South Africa on the anniversary of its first post-apartheid elections in 1994, Liberia’s foreign affairs ministry lamented that South Africa was going through “a difficult period.”

President Ellen Johnson Sirleaf, a Nobel Peace Prize winner, said he was was praying Zuma would “find the courage and strength” necessary “to lead his people in the right direction in order to overcome this dark chapter.”

Last Thursday, several thousand people marched through Johannesberg to protest against the recent attacks on immigrants.

The crowd sang, whistled and beat drums. Children in school uniform mingled with activists. The marchers carried placards with slogans including “Africa Unite” and “Say No To Xenophobia.”