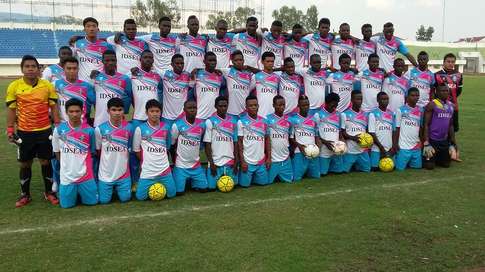 African footballers as young as 14 are being trafficked to Asia and forced to sign contracts, the BBC has learnt.

Six minors are still with top Laos side Champasak United, after it imported 23 under-age players from West Africa to an unregistered football academy in February, global players’ union FIFPro told the BBC.

Fifa regulations prohibit the movement of players to a foreign club or academy until they are 18.

The club, based in the southern city Pakse, denies any wrongdoing.

“Fifa is in contact with several member associations in order to gather all information to assess the matter and safeguard the interests of the minors,” a Fifa spokesperson told the BBC.

FIFPro, which has investigated the case for four months and which helped release 17 of the 23 players three months ago, said in a statement it “suspects this case is not one of its kind, but probably the tip of the iceberg”.

It has been claimed that Champasak United, a newly-formed club which plays in Laos’s top league, intends to profit by selling the players in future.

In a clear breach of the world football governing body’s rules, the club has fielded overseas players as young as 14 and 15 in league games this season.

One 14-year-old player, Liberia’s Kesselly Kamara, who scored in a full league game, says he was forced into signing a six-year deal before playing for the senior team.

His contract promised him a salary and accommodation, but Kamara says he was never paid and had to sleep on the floor of the club’s stadium – as did the rest of the travelling party.

“It was very bad because you can’t have 30 people sleeping in one room,” Kamara, who is now playing for a club back home in Liberia’s top league, told the BBC.

All those who travelled to join the “IDSEA Champasak Asia African Football Academy” did so after being invited by former Liberia international Alex Karmo, who captained the club at the time.

Young players gratefully accepted the invitation, since Liberia lacks a football academy of its own, despite being the only African country to have produced a Fifa World Footballer of the Year – George Weah in 1995.

“It’s a fictitious academy, which was never legally established,” said Liberian journalist and sports promoter Wleh Bedell, who led the group to Laos in February but who has since returned.

“It’s an ‘academy’ that has no coach nor doctor. Karmo was the coach, the business manager, everything. It was completely absurd.”

Following initial pressure from both FIFPro and Fifa, Champasak released 17 teenagers from the original party, with Kamara among them, by early April.

But six minors chose to remain.

FIFPro says that all have since signed contracts presented to them by Karmo, who describes himself as a “manager for players from Africa in Champasak”, and club president Phonesavanh Khieulavong.

“Today we have criminal activists threatening world football and the young players, so it’s important to work together. Fifa will have to be on top of this battle”

These appear to allow Champasak to pay the boys nothing at all, while also demanding that unrealistic conditions be met should the teenagers want to leave.

Karmo says the players are fed three times a day and paid every month.

“We don’t give the [minors] professional contracts, just a contract that gives them bonuses,” Khieulavong told the BBC.

Neither Khieulavong nor Karmo denied the presence of minors at the academies, although Karmo claimed there was just one – a 16-year-old from Guinea.

The BBC understands there are five more minors from Liberia at the club.

Along with eight senior players (six Liberians, a Ghanaian and Sierra Leonean), all are living in conditions described as “deplorable and disturbing” by Bedell.

For five months, they have been sleeping on meagre mattresses in a vast room that lacks any glass on its windows and a lock on the door.

“It’s hard to live in a place with no windows. It made sleeping very difficult, because you are thinking about your life,” said Kamara.

“Players are in this wild place that is reminiscent of the civil crisis in Liberia when people left their homes and were displaced, [taking shelter] in a makeshift building or auditorium,” Bedell, who experienced his country’s civil wars of 1989-96 and 1999-2003, told the BBC.

The minors’ freedom of movement is restricted by the fact that they became illegal immigrants in March after their visas ran out.

They are hoping to receive work permits but these are unlikely to arrive since all are underage.

Karmo, who insists that he did pay Kamara, admits nine of the 14 Africans do not have work permits but asserts that they have the right documentation to stay in Laos.

“Nobody is illegal. Everybody is legal,” he told the BBC.

With the club having held their passports since their arrival, the boys rarely leave the stadium where they both live and train twice a day.

Despite the situation, not everyone wants the minors to leave Laos.

“I don’t want him to come back to Liberia until he succeeds in his dream,” said Bella Tapeh, the mother of one 17-year-old still in Pakse.

Some of those who have returned to Liberia have told the BBC they were poorly fed, rarely paid and received no medical assistance from the club despite contracting malaria and typhoid because of the conditions.

One also described their existence at Champasak United as akin to “slave work”.

“This is a very serious situation,” Stephane Burchkalter, a FIFPro official, told the BBC.

“It is shocking to FIFPro that a club from Laos, which – with all due respect – is a very small football country, can lure minor players from Liberia without Fifa noticing.”

One NGO, Culture Foot Solidaire, estimates that 15,000 teenage footballers are moved out of West Africa every year – many of them illegally.

FIFPro has also called on Fifa to take action against the Laos Football Federation, which has so far failed to discipline Champasak for its alleged breach of the rules.

Evidence of clubs breaking regulations on signing international players under 18 is rare but European champions Barcelona are currently serving a transfer ban for this very offence.

Meanwhile, the parents of 12 boys found themselves in financial difficulty after taking loans to pay $550 towards the cost of the trip to Laos, with one case currently in the hands of Liberian police.

There are three exceptions to Fifa’s rules on the movement of players under the age of 18, but none of them apply in this case.