Till we run ‘out of fuel and bullets’: Jordan’s king vows to crush ISIS 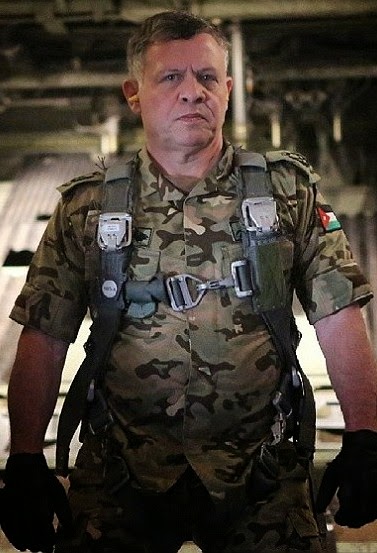 Jordan’s King Abdullah, himself a former general, angrily vowed to pursue ISIS until his military runs “out of fuel and bullets,” in a closed door meeting with U.S. lawmakers that followed the release Wednesday of a grisly video showing a captured Jordanian airman being burned alive in a cage by the terrorist army.

The pledge preceded the hanging of two Al Qaeda terrorists early Wednesday in Jordan, a swift response to the video that could be a mere harbinger of coming retribution from the Arab kingdom in the wake of the sadistic slaughter. King Abdullah’s words were echoed by military leaders, who vowed an “earth-shaking” response, proportionate to the magnitude of the tragedy of all Jordanians.” But it was the words of their visibly shaken king, who commanded his nation’s special forces before assuming the throne in 1999, that could foreshadow what is in store for the black-clad terrorist army whose atrocities have shocked the civilized world.

“He said there is going to be retribution like ISIS hasn’t seen,” said Rep. Duncan Hunter Jr., R-Calif., a Marine Corps veteran of two tours in Iraq and one in Afghanistan, who was in the meeting with the king. “He mentioned ‘Unforgiven’ and he mentioned Clint Eastwood, and he actually quoted a part of the movie.”

King Abdullah, who was in Washington for a diplomatic mission when the video depicting the horrific death of Lt. Muath al-Kaseasbeh hit the Internet, returned to Amman early Wednesday, after the dawn hanging of Sajida al-Rishawi, who was convicted for taking part in a 2005 triple hotel bombing that killed 60 in Amman, and Ziad al-Karbouly, an Iraqi who served as an aide to Al Qaeda in Iraq founder Abu Musab al-Zarqawi. The executions had been announced hours after the video of the death of Al-Kaseasbeh, who officiials now believe was killed as early as Jan. 3.

Ever since the pilot’s capture on Dec. 24, King Abdullah had shown a personal attachment to his fate. Al-Kaseasbeh, who was from a prominent tribe in the Karak governorate and had graduated from King Hussein Air College, the academy named for Abdullah’s father. The pilot’s father, Safi al-Kaseasbeh, who met with King Abdullah at least twice following his son’s capture, said the king told him he valued Kaseasbeh like his own son.

“The King told me that he was following up personally on Muath’s case,” the grieving father told the Jordan Times. “He said Crown Prince Hussein, may God protect him, is no dearer to me than Muath.”

Jordan, a member of the U.S.-led coalition that has been striking ISIS in Syria since this past September, had previously indicated it was considering an offer from Islamic State to trade Al-Rishawi for the pilot, but reports yesterday said the pilot had been dead for a month. The ghastly video sparked outrage on the streets of Jordan, a small nation of 6 million that shares borders with Syria and Iraq, where Islamic State has carved out its so-called caliphate. King Abdullah vowed to focus his people’s anger on the terrorist army.

Government spokesman Mohammad Momani said that Jordan’s response to the assassination “will be swift. Jordanians’ wrath will devastate Daesh’s ranks.”

In Jordan, Al-Kaseasbeh’s capture sparked debate about whether the nation should be participating in the airstrikes against Islamic State and if an exchange of prisoners was warranted. Jordan repeatedly sought proof that the pilot was still alive, and at times expressed frustration at the lack of communication. But news the pilot had likely been dead all along sparked rage in a nation that reveres its military.

In the video, viewed by Fox News, Al-Kaseasbeh, showing signs of having been beaten and clad in an orange jumpsuit, speaks under clear duress. A narrator speaking in Arabic blasts Arab nations, including Jordan, for taking part in U.S.-led airstrikes against ISIS. The final five minutes of the video show the caged pilot, his clothing apparently doused in gasoline as the fuel is lit. His screams are audible as he collapses to his knees. After being killed, the burned man and the cage are buried by a bulldozer. The video ends with ISIS offering “100 golden Dinars” for any Muslims in Jordan who kills other Jordanian pilots, whose names, pictures and hometowns are shown.

Sources told Fox News it demonstrated the highest production values of any tape to date, suggesting it took considerable time to shoot and produce. While Fox News Channel did not air the gruesome video, FoxNews.com elected to post it in the interest of showing the shocking depths of ISIS’ depravity.

“After careful consideration, we decided that giving readers of FoxNews.com the option to see for themselves the barbarity of ISIS outweighed legitimate concerns about the graphic nature of the video,” said John Moody, executive vice president and executive editor of Fox News. “Online users can choose to view or not view this disturbing content.”

President Obama condemned the murder of the pilot before meeting privately with the king, saying the atrocity would “redouble the vigilance and determination on the part of our global coalition to make sure they are degraded and ultimately defeated.”

“It’s just one more indication of the viciousness and barbarity of this organization,” Obama said. “And I think it will redouble the vigilance and determination on the part of the global coalition to make sure that they are degraded and ultimately defeated.”

“Lieutenant Al-Kaseasbeh’s dedication, courage and service to his country and family represent universal human values that stand in opposition to the cowardice and depravity of ISIL, which has been so broadly rejected around the globe,” Obama said, using another acronym for the terror group.

Jordan faces increasing threats from the militants. Jordan borders areas of the group’s self-declared caliphate in Syria and Iraq, while there are have been signs of greater support for the group’s militant ideas among Jordan’s young and poor.

After word spread that the pilot had been killed, dozens of people chanting slogans against the Islamic State group marched toward the royal palace to express their anger. Waving a Jordanian flag, they chanted, “Damn you, Daesh!”  — using the Arabic acronym of the group — and “We will avenge, we will avenge our son’s blood.”

“There is no religion [that] accepts such act,” Amman resident Hassan Abu Ali said. “Islam is a religion of tolerance. (ISIS) have nothing to do with Islam. This is [a] criminal act.”

Jordanian Army spokesman Mamdouh al-Ameri said the country would strike back hard. “Our punishment and revenge will be as huge as the loss of the Jordanians,” he said.

Protesters marched in the pilot’s home village of Ai and set a local government office on fire. Witnesses said the atmosphere was tense and that riot police patrolled the streets.

The pilot’s father, Safi Yousef al-Kaseasbeh, was attending a tribal meeting in Amman when news of the video surfaced, and he was seen being led from the session. Other men were seen outside, overcome with emotion.

The Islamic State group has released a series of gruesome videos showing the beheading of captives, including two American journalists, an American aid worker and two British aid workers. Tuesday’s was the first to show a captive being burned alive.

David L. Phillips, a former State Department adviser on the Middle East, said he believes the pilot’s killing could backfire, antagonizing Sunnis against the extremists, including Sunni tribes in Iraq.

“They need to have a welcome from Sunni Arabs in Anbar Province [in Iraq] to maintain their operations,” said Phillips, director of the Program on Peace-building and Human Rights at Columbia University.

He said the extremist group’s recent military setbacks may have fueled the killings. “They need to compensate for that with increasingly gruesome killings of prisoners,” he said.

The latest video was released three days after another video showed the purported beheading of a Japanese journalist, Kenji Goto, who was captured by the Islamic State group in October.

The militants had linked the fates of the pilot and the journalist. A second Japanese hostage was apparently killed earlier last month.

The U.N. Security Council, in a statement, condemned the “brutality of ISIL, which is responsible for thousands of crimes and abuses against people from all faiths, ethnicities and nationalities, and without regard to any basic value of humanity.”