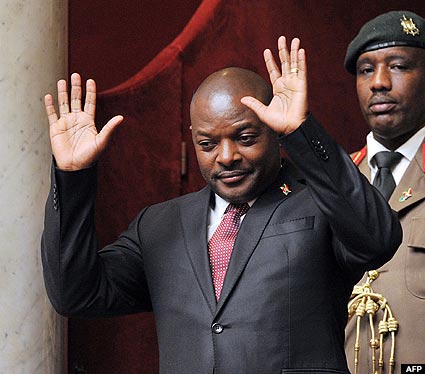 Despite riding on popular local support and a silent acquiescence of the international community, the Major General Niyombare-led plot to remove Burundi’s sit-tight President Nkurunziza was a colossal failure. Backed by some prominent forces within the country’s security establishment, Niyombare had on Wednesday announced the dismissal of the President for seeking a controversial third term mandate. His announcement was received with wild jubilations on the streets of Bujumbura, and a tacit heave of relief from members of the international community, most of whom were frustrated by the president’s quest to remain in power.

However, barely 24 hours after the Major General’s announcement, the euphoria that greeted the coup was all but diffused. It dawned on the coup plotters and their backers that they had lost the plot, same with the international community which finally began to condemn the act of the plotters. By this morning, the government announced it has arrested the leaders of the putsch, among them Major General Niyombare, who had been on the run and begging for clemency. So why did coup that looked so sure to succeed fail so swiftly?

Here are three things the plotters so wrong:

They wrongly assumed that ‘away’ meant ‘out’

The first mistake of the coup plotters was assuming that President Nkurunziza’s absence from the country meant a power vacuum.  Immediately the President left for a meeting in Tanzania, Major General Niyombare, the former chief of army staff and recently sacked national intelligence service, announced the dissolution of the government. He moved to seize institutions as well as seal the country’s borders to prevent the President from returning, pretty easy tasks he must have thought. Analysts thought so too; looking solely at precedence, they called the deposition a facsimile success, but they were wrong.

Burundi has a history of similar takeovers that went smoothly.  The first President of the country, Michel Micombero deposed the Monarchy in 1966 through a bloodless coup and was removed in similar fashion ten years later by then Army Deputy Chief of Staff, Jean-Baptiste Bagaza. Bagaza was himself deposed by Pierre Buyoya without much hassle while he was on his way to Canada in 1987. Buyoya would leave office in 1993 and return three years later in another popular, military backed and bloodless coup against interim President Ntibantunganya. But, the present has proven different from history because unlike with past presidential casualties, the current president still has a solid support base within the military and the civilian population.

Once learning of the Niyombare’s announcement, the Nkurunziza’s spokesman derided the dismissal as a “joke”, and he had reason to feel confident. The president, around or not, could count on his loyalists in the army to safeguard his government, and that was exactly what they did. This is evident in the statement by coup co-leader, General Cyrille Ndayirukiye, who said the rebels had been “faced with an overpowering military determination to support the system in power”. This brings the second reason the coup failed.

They failed to win over the Army, or, at least, most of it

Major General Godefroid Niyombare announced the president’s dismissal at a military barracks and had some senior Army and Police Officers by his side. However, what he did not have was the support or control of most barracks, which was in the hands of the Chief of Army Staff, General Prime Niyongabo. And Niyombare did not have the General.

Within hours, forces loyal to General Niyongabo had pushed back the advances of the coup plotters, retaken the airport that they had blocked and sacked Radio Stations that broadcasted their declarations. “The coup attempt failed, loyal forces are still controlling all strategic points,” said Army Chief of Staff General Prime Niyongabo in a statement broadcast on state radio. While there were still running battles around the state television and radio station in the capital by Thursday, it was clear that the plot had failed.

The coup’s failure is also partly because its main backers, Niyombare and former Defence Minister Cyrille Ndayirukiye, were largely out of the pivots of the military establishment, and thus had limited control over men and resources. Niyombare lost favour with Nkurunziza in February over his warning to the president not to run for third term. He was fired as intelligence chief, and was shifted off any role of strong influence. Cyrille Ndayirukiye, who became Defence Minister after former president Busoya sacked current President Nkurunziza from the position in 2000, has also been far away from the corridors of power. It was highly inconceivable that both men could rally the armed forces without support from the current military leaders, and they clearly did not have that. This brings us to the third reason.

They did not realise the extent of ethnic sentiments, in the Army and in the public

The rebel leaders underestimated the level of ethnic loyalty to President Nkurunziza, and paid a dire price for it.

The Burundian Army is widely regarded as one of the best products of the year 2000 Arusha Accords, which marked a formal end to the country’s civil war. It was reconstituted to balance the representation of the Hutu Majority and Tutsi minority through the establishment of ethnic quotas. Since then, the unity within the army seemed to be growing– it even declared itself neutral from the protests against the President– until the coup attempt. “… In the wake of the coup, divisions between those supporting the coup and those backing Nkurunziza quickly manifested themselves in battles for control of the capital, especially state radio,” Stephen Graham and Anthony Morland wrote in IRIN.

While at the surface the divisions seemed to be between supporters and opponents of Nkurunziza, than Hutu and Tutsi, it now seems not to be the case. Both Niyombare and Ndayirukiye may be of Hutu extraction, but the opposition that they led has been propagated by the government as Tutsi driven. The President’s CNDD-FDD party youth wing, the Imbonerakure, is overtly Hutu and has been accused of attacking Tutsis. Rwanda’s president, Paul Kagame has also warned of the influx of fighters from the Democratic Forces for the Liberation of Rwanda (FDLR), a Hutu rebel group based in the Democratic Republic of Congo (DRC), whom he says have come to assist Nkurunziza’s hold onto power. Such ethnic sentiments, played up by the president–a former Hutu rebel leader– made any attempt to sack him as an attempt to dismantle Hutu domination.

Given this ethnically tensed climate, it is unforeseeable how the rebels would have succeeded without starting another nationwide bloodshed. Members of the international community feared this too and condemned the coup attempt, although most did after its failure was certified.

Although coup is a confirmed failure, President Nkurunziza’s problems are far from over. Many in his country are still disgruntled with his bid for a third term, how he responds to their protests will determine if the country plunge further into crisis. Already, over 105,000 Burundians have fled to neighbouring countries for fears of more violence.