Most people know about the Nazi Holocaust, the murder of 6 million Jews and 6 million others: Russians, Gypsies, Slavs, socialists, disabled people and LGBT people.

Alongside the big narrative of the Holocaust there are a myriad of small, individual stories and testimonies that help illustrate and shed light on the cruelty and barbarity of the Nazi regime.

One such account is the story of what happened to Germany’s tiny black population.

Primo Levi once wrote, “this is a story interwoven with freezing dawns”. Some may know their story, I certainly didn’t.

Tucked away inside Hitler’s anti-Semitic diatribe, Mein Kampf, there is the following passage:

It was, and is, the Jew who brought negroes to the Rhine, brought them with the same aim and with deliberate intent to destroy the white race he hates by persistent bastardisation, to hurl it from the cultural and political heights it has attained, and to ascend them as its masters.

This was not entirely a figment of his imagination; there were a small number of young black children of African heritage living in the Rhineland.

Like most west European countries, by the 17th century, Germany had a small black population. The modern state of Germany was founded in 1871.

The number of black people living in Germany increased from 1870 onwards. They came mainly from Germany’s small colonies in Africa and south east Asia; they were students, artisans, entertainers, former soldiers, low-level colonial officials, such as tax collectors, who had worked for the imperial colonial government.

Even before the Nazis took power in 1933, Germany’s black population faced racial discrimination and violence. Most government, religious and colonial officials refused to register interracial marriages or births. The state promoted eugenics, and popularised arguments about the inferiority of dual-heritage children.

Following the defeat of Germany in the First World War, the Allies stripped Germany of its colonies. Also as part of the war reparations (under the Versailles Treaty) the Allies occupied the Rhineland in western Germany.

Firpo Carr in Germany’s Black Holocaust: 1890-1945, estimates that over 200,000 French troops occupied the Rhineland region. They included a number black colonial troops.
Some of these African Rhineland-based soldiers married German women and raised their children as German; other German women had children by African soldiers outside of marriage.

Estimates vary, but there were over 800 dual-heritage children living in the Rhineland region. The Nazis and some sections of the press labeled these children “Rhineland Bastards” or “Rhineland Mischlingers” (mixing their blood with “alien” races). 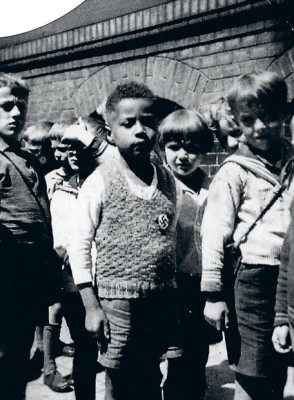 The term “Rhineland Bastard” is of course vile. It both articulated the Nazis’ biological construction of race and colonial conceptions of race and racial mixture that were seen as posing a threat to “white” superiority.

The isolation, segregation and attempted eradication of Germany’s black population was carried out in stages. This mirrors (obviously on a tiny scale) the methods used by the Nazis in their attempts to wipe out Europe’s Jewish population.

Some of these children and their families fled Germany after the Nazis took power; others were killed in the round-ups that followed.

The Nazis enacted a new law providing a basis for forced sterilisation of disabled people, Gypsies, and blacks on the 14 July 1933. If you want to read further about this horrific practice go to Benno Muellar-Hill’s Murderous Science: Elimination by Scientific Selection of Jews, Gypsies, and Others in Germany, 1933-1945.

Under the Nazis, African-German mixed-heritage children were marginalised, isolated socially and economically, and not allowed to attend university. Racial discrimination prohibited them from seeking most jobs.

Then followed the Nuremberg laws of September 1935. These prohibited miscegenation – mixed marriages between Aryans and others. Any young Afro-German woman who got pregnant was forced to have an abortion.

An organisation named “Commission Number 3″ was created by the Nazis to deal with the so-called problem of the “Rhineland Bastards”. This was organised under Dr Eugen Fischer of the Kaiser Wilhelm Institute of Anthropology, Human Heredity and Eugenics. It was decided that the African-German children would be sterilised under the 1933 Law for the Prevention of Hereditarily Diseased Offspring.

The programme began in 1937, when local officials were asked to report on all “Rhineland Bastards” under their jurisdiction.

All together, some 400 children of mixed parentage were arrested and sterilised. The Nazis went to great lengths to conceal their sterilisation and abortion programme.

What happened to these Afro-Germans is very complex – their experiences were not uniform. Some of these children were subjected to medical experiments and others mysteriously “disappeared”.

Hans Hauck, a black Holocaust survivor and a victim of Hitler’s mandatory sterilisation programme, explained in the film Hitler’s Forgotten Victims that when he was forced to undergo sterilisation as a teenager, he was given no anaesthetic. Once he received his sterilisation certificate, he was “free to go”, so long as he agreed to have no sexual relations whatsoever with Germans.

Tina Campt, in her path-breaking book, Other Germans: Black Germans and the Politics of Race, Gender, and Memory in the Third Reich, interviewed several black Rhineland survivors.

She published testimony from one male member of this Rhineland group. In his complex statement he recalls being sterilised under the Nazi programme, then later he became a member of the Hitler Youth movement. He then joined the German army, was captured by the Russians and spent several years as a German prisoner of war in Russia.

Not enough research has been done to unravel what happened to Germany’s black population. We know that most – alongside other black Europeans and many black soldiers – ended up in Nazi concentration camps and were murdered. 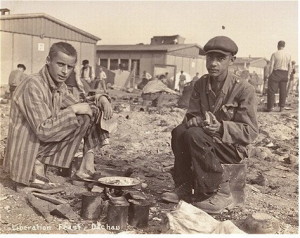 Like their Jewish counterparts they did not go meekly to their deaths – they resisted the best they could. A tiny handful survived and were able to tell their story.

One such black survivor was Johnny Voste, a Belgian resistance fighter who was arrested in 1942 for alleged sabotage and then shipped to Dachau concentration camp.

He told that one of his jobs was stacking vitamin crates in the camp. Risking his own life, he distributed hundreds of vitamins to camp detainees, which saved the lives of many who were starving and weak. His motto was: “No, you can’t have my life; I will fight for it.”