The Birth of a Nation: The most racist movie ever made? 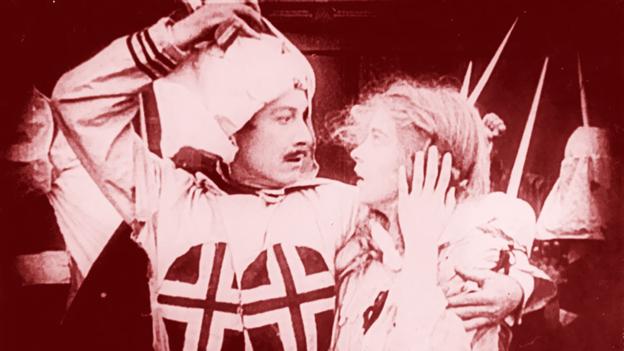 DW Griffith’s film was released on 8 February 1915. A century later it’s regarded as a landmark in cinema history – and terribly bigoted.

One hundred years after it was made The Birth of a Nation still has the power to both enthrall and appall. The film is as confounding as ever, both brilliant and repugnant. Groundbreaking in its use of innovative cinematic techniques, it remains tainted by its brazen racism.

The Birth of a Nation was the creation of DW Griffith, who had tried his hand as an actor and playwright but whose real genius lay in film-making. Nothing on its scale had even been attempted before. It was the epic story of the relationship between two American families, one Union, the other Confederate, at the time of the Civil War and the Reconstruction that followed. The film ran for more than three hours and employed (according to a New York Times report from the time) 18,000 people and 3,000 horses. By 1922 it had been watched by more than five million people. It was the first blockbuster.

“It was a box office success – a mainstream film, so utterly mainstream,” says Professor Alan Rice, a Birth of a Nation expert at The Institute for Black Atlantic Research at the University of Central Lancashire, who has been organising a series of symposia on the film.

It made history by becoming the first film ever to be screened at the White House. But it was revolutionary for another reason: “It was very important in [that] it was the first full-scale long narrative using a lot of the new techniques of film-making,” says Rice.

The use of night photography, panoramic long shots, montage and parallel editing all worked extremely well, as did the war scenes involving legions of extras. Many classic battles in modern cinema from Braveheart to The Lord of the Rings are said to have drawn from the battle sequences in The Birth of a Nation.

“It’s the building block film. There would be no extended movie narrative without Griffith. It is the film that showed the world about the potential of cinema,” says Armond White, who reviews movies for National Review and Out Magazine.

The picture establishes a narrative structure that’s still being copied by modern Hollywood.

“The way it works, the sweeping historical epic, you put families divided by war, and [place] a romance story at the centre,”says Paul McEwan, who’s the author of a forthcoming book in the BFI Classics series on the film. “That’s [also] what Titanic is, that’s what most of those kinds of films are…  and that’s how those still work to this day.”

But for all its magnificence, what is inescapable in any assessment of The Birth of a Nation is the troubling racism that leaps off the screen.

“The film is one of the most racist films ever made. Maybe the most racist film ever made,” says Ellen Scott, author of the just-published Cinema Civil Rights. “This film actually depicts lynching as a positive thing,” she says. “The politics of the film was essentially to say certain black people are worthy of being lynched. In that sense it’s extremely racist.”

Whatever role DW Griffith may have played in bringing a racist film to the screen, the root of much of the bigotry can be located in his source material, a racist text called The Clansman, written by Thomas Dixon Jr.

McEwan sees the underlying story as deeply flawed. “The film argues that giving black people rights was a terrible, terrible error, that they did all sorts of horrible things that actually they didn’t do, and that the noble Ku Klux Klan (KKK) was this wonderful saviour that saved America,” he says. “It couldn’t be any more wrong.”

The film is credited with reviving the racist KKK, who adopted it as a recruitment tool. “The Ku Klux Klan had been kind of a dead organisation by 1915, but when the film [came out and became a hit] the KKK was refounded, capitalised on [the film’s success] and in the 1920s became a massive organisation at the peak of nativist fervour in the United States,” says Paul McEwan.

“It [also inaugurated] the use of certain kinds of racial stereotypes which then became repeated again and again, right up until the 1960s and even beyond,” says Rice. As a case in point he cites a particular moment in the film that showed black lawmakers in South Carolina “as certain bestial simians eating fried chicken and bananas, leering at white women in the galleries”.

But the film’s racism was heightened because critics and film historians have judged it to be so brilliant in its use of cinematic techniques. “I don’t think we would remember this film as we do had it not been for the way [Griffith] uses parallel editing and shows us the KKK [rushing] in to save [the heroine], on horseback no less,” Ellen Scott says. “And he cross-cuts that image with the image of [a] black man attacking various people. So we have these two images cut together and in some sense the suspense that creates is the main impact of the film. I think that the film’s techniques were woven in with the film’s racist power.”

Art out of atrocity?

The prevailing view is that the film’s racism doesn’t ultimately detract from its technical and artistic prowess.

“It absolutely does not,” says White. “There are many works of art that have elements of them that people may find objectionable. It doesn’t necessarily change their aesthetic value, or doesn’t necessarily change the imagination or intelligence in them,” he says. “The racist paradoxes of The Birth of a Nation [are ones] we have to live with, but we’re only fooling ourselves if we deny [the film’s] greatness.”

The Birth of a Nation isn’t alone, there are other films that are considered works of art but also boast distressing content, such as German director Leni Riefenstahl’s 1935 film Triumph of the Will. It was beautifully shot, breaking new ground with its use of cinematography and music, but was major Nazi propaganda. Like The Birth of a Nation, it too has provoked considerable debate.

“That’s the best analogy,” says McEwan. “No one denies that Triumph of the Will is incredibly well made and that’s actually what made it dangerous. If it was terrible then it wouldn’t have worked.”

Over the years there have been efforts to ban The Birth of a Nation, however.

Early attempts to censor the movie in the US at the time of its release were orchestrated by the newly formed National Association for the Advancement of Colored People (NAACP).

“The NAACP was very conflicted about whether the film should be banned,” says Scott, who points out that many of the organisation’s members also supported civil liberties, and that included freedom of expression.

Many of the attempts to ban the film failed because sex and morality, not racism, were seen as the most pressing problems in cinema at the time – and Griffith and his cohorts had an army of lawyers to fight off efforts to censor his picture.

A product of its time

“I think the historical distance is great enough that we can see it as a product of a particular historical moment,” says Ellen Scott.

In fact many scholars think it most definitely should be seen.

“When it is shown, it should be shown within the context of a debate. Censoring it would make it more underground. It would play into the hands of the racists who would say we can’t debate with the film,” says Professor Rice.

In fact Rice doesn’t view the film as a historical artifact at all. He cites the work of US sound artist DJ Spooky. “He’s a young African-American who’s made a response to the film called Rebirth of a Nation, which mixes images of the film with his own soundtrack.” It’s an attempt to challenge the assumptions of the film. “I think the legacy really is that we don’t lie down in front of these images,” Rice says, “that we create works of art that speak back to [those images] and create new realities,” he says.

The Birth of a Nation is 100 years old, and it’s a film that’s not going to go away. It’s part of America’s cultural legacy. It is also, on its centenary, a disconcerting reminder of one interpretation of modern America’s genesis. It shows the birth of a nation in a land where racism was rife. What’s most troubling is that 100 years later the racism depicted by Griffith in his epic, while far less egregious today, still remains remarkably routine.