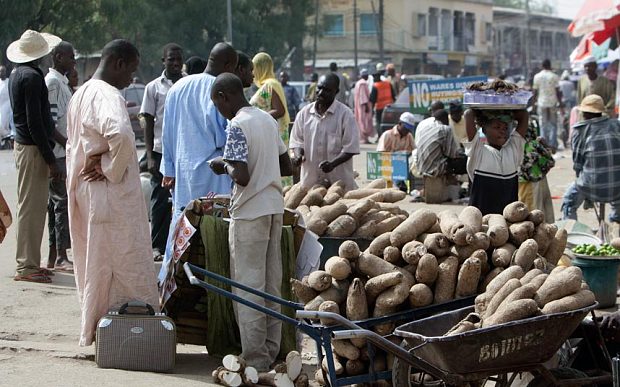 A girl, thought to be 10 years old, blows herself up in the northeast Nigerian city of Maiduguri

At least 10 people were killed when a young girl, thought to be aged 10, blew herself up at a crowded market in the northeast Nigerian city of Maiduguri, the Red Cross and vigilantes said.

The powerful explosion rocked the city’s market at about 12.40pm (11.40am GMT) when it was packed with shoppers and traders on Saturday. The same market was hit twice by female suicide bombers late last year.

There was no immediate claim of responsibility but Boko Haram militants have increasingly used women and young girls as human bombs in their six-year quest for a hardline Islamic state.

Civilian vigilante Ashiru Mustapha said the explosives detonated as the girl was being searched at the entrance to the market.

“The girl was about 10 years old and I doubt much if she actually knew what was strapped to her body,” he told AFP.

“In fact, she was searched at the entrance of the market and the metal detector indicated that she was carrying something.

“But sadly, the explosion went off before she was isolated, killing at least 10 people and injuring many others.”

According to police, the figure for those dead is 20 and 18 injured in Nigeria market blast.

The market was cordoned off as health officials began the task of sifting through the wreckage and collecting body parts.

A Red Cross official who declined to give his name said: “We have so far evacuated 10 bodies to the mortuary at the (Borno) State Specialist Hospital.”

Abubakar Bakura, a witness, said: “The blast split the suicide bomber into two and flung one part across the road.

“Among the dead are two vigilantes who were searching the girl. I am pretty sure the bomb was remotely controlled.”

An attack at the market on December 1 killed more than 10 people, and the previous week more than 45 people lost their lives in an attack there.

Boko Haram launched its first female suicide attack in June last year in the northern state of Gombe and there have been a spate of bombings since, including four in a week in the city of Kano.