Read the national broadcast by Pres. Jonathan on the 2015 election 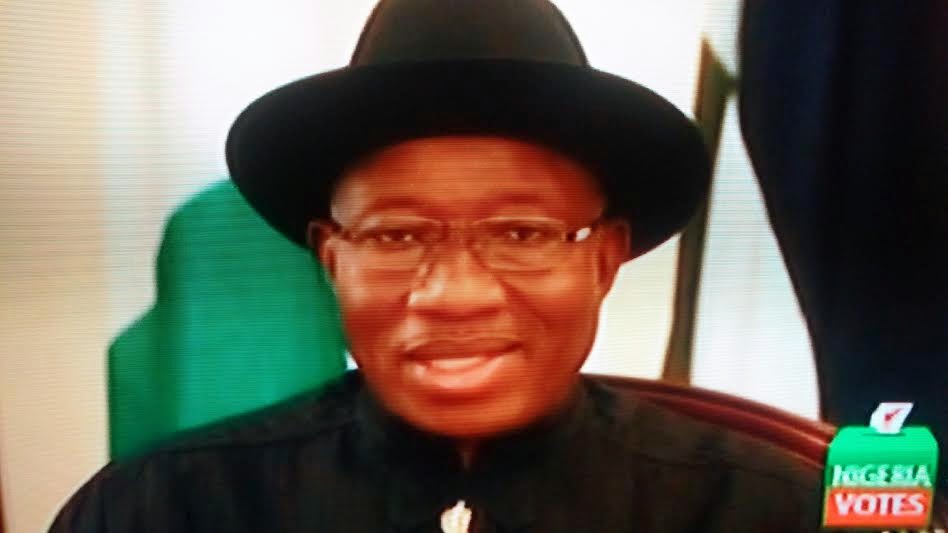 President Jonathan this morning addressed the nation in a TV broadcast where he called on everyone to come out en-mass to vote for leaders of their choice. What he said below…

1. As we prepare to go to the polls tomorrow, I have come before you this morning to express my immense appreciation for the opportunity you gave me to lead this great nation of ours in the past four years.

I also wish to place on record, once again, my sincere gratitude for the support you have given my administration without which the significant progress we have made in recent years would not have been possible.

In spite of the many challenges we have had to contend with since 1999, our present democratic dispensation continues to endure and grow stronger in keeping with the yearnings and aspirations of our people.
We have all worked very hard to nurture and strengthen our democratic institutions and promote the good governance practices which they were designed to deliver for the better well-being of  our people.

I believe I can say without fear of contradiction that we all clearly cherish the democracy we now have and will never willingly give it up for any other form of governance.
This much-cherished democracy of ours is about to be put to the test once again.

I urge you all to troop out en-masse to peacefully perform your civic duty of voting for leaders of your choice tomorrow.

As we do so, let us all – political party leaders, contestants, party members, party agents, supporters and ordinary voters alike, be very conscious of the fact that the eyes of the entire world are on us.

We must therefore comport ourselves in a manner that will further strengthen our democracy and consolidate our place in the comity of truly democratic nations.
I made a commitment on assumption of office to progressively deliver freer, fairer and more credible elections in our country. In keeping with that commitment, the Federal Government has given the Independent National Electoral Commission (INEC) all necessary support to ensure that it conducts very successful elections tomorrow and on April 11.

We have all been assured that INEC is fully ready for the elections. I believe that we can all trust that they are certainly more ready now than they may have been before security issues and other concerns necessitated a re-scheduling of the dates for the 2015 general elections.
An administration, we welcome the fact that millions of Nigerians who were yet to receive their Permanent Voters Cards (PVCs) as at February 14, and would therefore have been unfairly disenfranchised if the polls had gone ahead  on that date, have seized the opportunity of the re-scheduling to collect their cards and can now exercise their right to vote tomorrow.

We are also glad that our gallant Armed Forces have successfully stemmed the seizure of Nigerian territories in the North-East by the terrorist group, Boko Haram.

They have recaptured most of the communities and territories formerly occupied by the insurgents, making it possible for thousands of internally-displaced Nigerians to begin returning to their homes and communities.

I heartily commend the very courageous men and women of our Armed Forces for the immense sacrifices which they continue to make in defending the nation and protecting its citizens.

I also thank all Nigerians for keeping faith with us over the past six weeks.

I call on all political parties and politicians in the country to allow the free, unfettered will of our people to be expressed without any hindrance in the coming elections in keeping with the hallowed principles and tenets of democratic governance which we all profess.

The will of the people freely expressed through the ballot is the bedrock of all democracies and ours cannot be an exception.

Let us all therefore be prepared, as true democrats, to graciously accept the outcome of the elections as the rightful choice of our people from whom all political powers in our democracy must emanate.

My administration has done its utmost best in the past four years to deliver on our promise to positively transform our country.

Tomorrow’s election is another very important milestone as we continue our march towards the fulfillment of our God-given potential for greatness.

The election offers us another opportunity to empower leaders of our choice once again, and to show the world that genuine democracy is alive and well in our beloved nation.

I will like to restate my belief that no political ambition can justify violence or the shedding of the blood of our people.

I reaffirm once again, my personal preparedness to ensure fair play during the elections and to deploy the resources and institutions of state only in the manner prescribed by our laws.

Let me warn, however, that as President, Commander-In-Chief of the Armed Forces, I am under oath to protect the lives of all Nigerians and the security of our country at all times. I will never abdicate my responsibilities in that regard.

Democracy allows dissent. It encourages differences and even fervent disagreements. But elections must never be mistaken for war or an opportunity to set fellow citizens against each other and tear our beloved nation apart.

Those who may harbor any intentions of testing our will by unleashing violence during the elections in order to advance their political ambitions should think again as all necessary measures have been put in place to ensure that any persons who breach the peace or cause public disorder during or after the elections are speedily apprehended and summarily dealt with according to our laws.

The nation’s security agencies are also fully prepared and ready to deal decisively with any group or persons who attempt to disrupt the peaceful conduct of the elections or cause any form of public disorder.

Our dear country, Nigeria is the largest democracy amongst black nations of the world. We are a nation of great accomplishments, with a proud history of evolving affinities.

Let us go out tomorrow to vote peacefully and set a fitting example of political maturity for other emerging democracies to follow.

I wish you all and our dear nation, very peaceful and successful elections.

May God Almighty continue to bless the Federal Republic of Nigeria.

I thank you all.