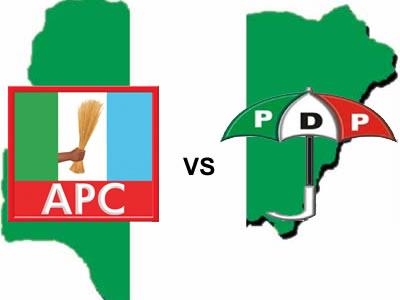 Today is the D-day! Nigerians are trooping out en-masse to elect the next Nigerian president, Senators and members of the House of Representatives for the next four years. As early as 7 am, eligible voters are expected to to be at their polling units for accreditation through the card reader to clear voters for the voting proper.

Fourteen political parties and presidential candidates of these parties are gunning for Nigeria’s coveted number one seat and leading the pack are incumbent President Jonathan of the ruling Peoples Democratic Party, PDP and General Muhammadu Buhari of the All Progressives Congress, APC.

Ab initio, the presidential and national assembly elections were meant to hold on February 14, 2015 but just a week before they were originally due, the Independent National Electoral Commission (INEC) announced a six-week postponement.

The security question triggered of by the activities of Boko Haram Islamists in the north-east put security at the centre of the election campaigns and both parties clashed over how to handle the insurgency in Nigeria. INEC was also appeared not ready as many Nigerians were yet to collect their permanent voters cards.

In the past, elections have been marred by violence and allegations of vote-rigging and since parties began campaigning in mid-November, both the ruling and opposition camps have reported violent attacks against their supporters. Severally, there were reported clashes between rival supporters of both parties leaving blood and tears in the trail.

In today’s election, security forces are also coming out en-masse to closely observe the voting process to avoid violence and blood-letting.

Indeed, anxiety is high today. The country has a fragmented political class.

The economic situation is uncertain, oil prices are falling and the naira has been devalued. Stomach infrastructure is a new vocabulary in the political dictionary.

With these prevailing circumstances, many are expressing nostalgia for the 2015 elections.

However, the Independent National Electoral Commission (INEC) has promised a clean ballot. All 14 candidates have signed an agreement binding them to credible and non-violent elections. Official campaigning ended two days before polling day.

The ruling Peoples Democratic Party, PDP’s candidates are  President Goodluck Jonathan and his vice, Namadi Sambo, while the main opposition All Progressives Congress, APC, has  Muhammadu Buhari and Yemi Osinbajo as presidential and vice presidential candidates.

The Labour Party, LP, and the All Progressives Grand Alliance, APGA, have already adopted the PDP candidate, Goodluck Jonathan as their candidate as well.

HOW WINNERS CAN EMERGE

Of all the candidates, only Messrs. Jonathan and Buhari were candidates in the last election in 2011.

To win in the first round, a candidate needs more than 50% of the national vote and at least 25% of the votes in two-thirds of Nigeria’s 36 states.

For the first time, Permanent Voters’ Cards are being used in Nigeria.

The INEC said more than 80% of eligible voters have obtained their biometric PVCs. The minimum voting age is 18.

For more credibility, an extra 30,027 polling stations have been set up, bringing the total to 150,000 nationwide.

Polls, according to INEC, are expected to commence at 0800 local time (0700GMT). All voters must be present at their designated polling station by 1300 local time (1200GMT) at the latest to be allowed to cast their ballot. Polls will close when the last person in the queue has voted.

The Nigeria Police said over 360,000 police officers and sniffer dogs will be deployed at strategic areas.

The presence of international and local observers has also been approved by INEC to monitor the elections, although the European Union says its observers will not be deployed in the north-east due to security concerns.

The national Assembly amended the electoral law on January 15 to allow an estimated one million displaced people by the insurgency to cast their votes.

Over the years, governance under civilian rule had been dominated by the predominately Muslim north until 1999 when President Olusegun Obasanjo, a Southern Christian broke the jinx at the onset of the fourth republic. Ever since, the Peoples Democratic Party (PDP), has remained in power with Jonathan breaking the power sharing principle after Yar’Adua’s demise.

In 2011, Goodluck Jonathan and General Muhammadu Buhari were the main candidates for the election. Buhari won all of the predominately Muslim states while Jonathan won the rest (with one exception). For years, Nigeria’s voting process has been dominated by allegations and counter allegations of rigging. But voting has gotten better with more polling stations open on time and supplied with ballots than ever before.

The main candidates and their areas of strength

Fourteen presidential candidates are recognised by the Independent Electoral Commission as bonafide contestants in the election but only Goodluck Jonathan and Gen Buhari have a realistic chance of winning.

Incumbent President Goodluck Azikiwe Ebele Jonathan is seeking a second four-year term but his party, the Peoples Democratic Party,PDP, is currently facing the toughest challenge since the civilian rule was restored in 1999 in the person of Gen Muhammadu Buhari of the All Progressives Congress, APC.

Jonathan’s strength in today’s election is expected from the predominantly Christian South. However, his government has been fiercely criticized for its failure to combat Boko Haram in the north-east until recently when the combined forces from Nigeria, Cameroun, Niger and Chad made a headway in tackling the insurgents and recovering most of the towns in the North East occupied by the terrorists .

General Buhari of the All Progressive Congress, APC, who appears to be a serial contestant has lost the last three elections but he has a great follower ship this time around with even some sections of the media predicting he could win this time. The former military leader has described the PDP’s 16-year rule as “a disaster for the country and its citizens”.

In his base in the Muslim-dominated North, General Buhari is perceived to be extremely popular.

Due to the trending security issue, Gen Buhari has made security a priority during his presidential election campaign, promising to crush Boko Haram within months.

Last year July, he reportedly survived an attack on his convoy allegedly carried out by the group.

While the Nigerian military and their African neighbours continue to battle Boko Haram, the fears that elections mighty not hold in the North east are now completely out of the picture as election are scheduled to hold in every state across Nigeria today.

Political observers and supporters of Gen Buhari are also optimistic that he will do well in the south-west especially in the commercial capital Lagos. However, former Niger Delta militants in the oil-rich south are routing for Jonathan and threatened violence if General Buhari wins.

However, the results of 2015 are not fore-ordained, as they have been in previous elections. There are question marks on several issues including holding elections in the war-torn cities of the North East and how the over one million internally displaced persons in those cities can vote. How would Nigerian refugees in Cameroon, Chad, and Niger vote?

Political parties have penchant for rejecting elections and that means that no matter which candidate is declared the winner, there would still be grounds for the loser to reject the results.