Nigeria’s Oil Assets are the Most Vandalized in the World 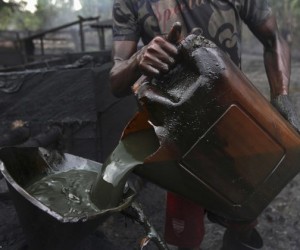 “We have never seen a set of people that can be as wicked to themselves as we have in some Nigerians who are bent on perpetrating their wicked acts on our gas pipelines,” said Nebo, who was represented by Permanent Secretary of the Power ministry, Godknows Igali.

The minister also recently stated that pipeline destruction has dire consequence on electricity generation in the country. “Vandalism is affecting our capacity to generate electricity. We are hoping that in the next two weeks, with the other pipelines that are being repaired and the ones that are being serviced, we will have been back to, and even beyond where we are,” he said.

Speaking on measures to combat oil theft and pipeline vandalism in the country, the Minister said that Security Agents are being stationed at specific locations, and that the Federal Government was investing in the deployment of digital surveillance cameras to monitor the pipelines.

“When you are talking about thousands of kilometres on one stretch, to police this is not easy, … What we are now trying to do using the various security agencies, especially the Nigerian Security and Civil Defence Corps, the Navy, Army, Police, and so on, to make sure that these places are garrisoned … The most critical is what Mr. President is trying to do now, deploy resources to digitally survey the pipelines. It is very expensive. But we have to do that. Until that happens, we still have to worry about vandalism.”

The Nigerian National Petroleum Corporation, NNPC, reports how the activities of pipeline vandals have complicated the free flow of petroleum products and crude supply in its pipeline system leading to a colossal cost of over N174.57 billion in product losses and repairs of products pipelines within the last 10 years.

In a recent presentation series in Abuja, the NNPC management team led by the Group Managing Director, Dr Mohammed Sanusi Barkindo revealed to the Inspector General of Police, Ogbonnaya Onovo and the Chief of Defence Staff, Air Marshall Paul Dike, the negative impact of illegal bunkering, pipeline vandalism and product theft on the capacity of Nigeria’s massive oil and gas assets to function optimally.

Barkindo stated that a total of 16,083 pipeline breaks were recorded within the last 10 years adding that while 398 pipeline breaks representing 2.4 per cent were due to ruptures, the activities of unpatriotic vandals accounted for 15,685 breaks which translates to about 97.5 per cent of the total number of cases, according to the report.