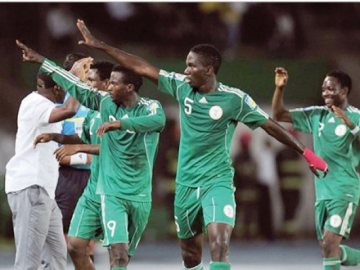 The Nigeria U20 team, the Flying Eagles, have been crowned champions of the 19th Africa Youth Championships as they defeated hosts, Senegal, by a lone goal in a thrilling final match on Sunday night at the 45,000-capacity Leopold Sedar Senghor Stadium.

A stunning goal from Bernard Bulbwa in the first half was all that was required for Nigeria to lift her 7th AYC trophy.
Nigeria and Senegal had faced each other two weeks ago in the group opener of the competition AYC with the Flying Eagles emerging as 3-1 winners.

Going into Sunday’s game, the Flying Eagles had vowed to complete a double but the Senegalese who were making the final for the first time promised to turn the tables against Coach Manu Garba and his boys in the final match.

The Senegal team did try to turn things around as they enjoyed the earlier attacking foray in Sunday’s final match with the likes of Ndiaye and El Hadji Niang both attempting to get the ball past Flying Eagles goalkeeper, Joshua Enaholo, who was in good form.

Despite Senegal’s initial initiatives, it was the Flying Eagles that took the lead in the 19th minute when Bernard Bulbwa justified his late inclusion in the starting line-up with a wonderful goal that is in contention for goal of the tournament.

From then on the two teams tried with no success to get another goal.

Earlier in the day, Ghana won the third place game defeating Mali 3-1. The four teams that reached the semi-final – Nigeria, Senegal, Ghana, and Mali- will represent Africa at the FIFA U20 World Cup.