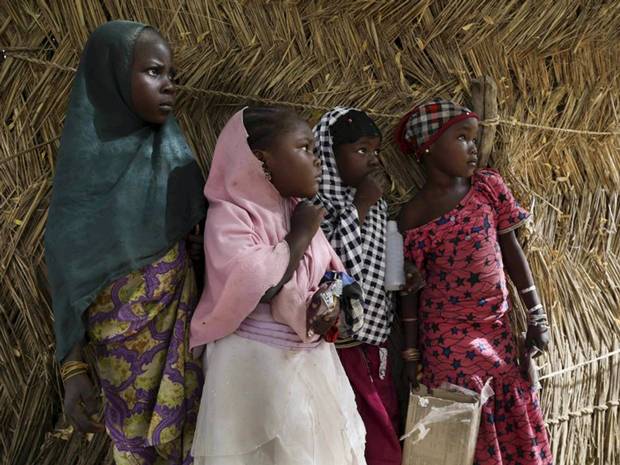 Abubakar Glavda looks forlornly at the red-dust ground, recounting the day Boko Haram entered his village. “I lost two sons that day; they had both just started primary school. As I ran with my other children for our dear lives the machine guns opened up and I would never see my two boys again.”

It is a tale painfully familiar among Nigeria’s internally displaced people (IDPs). As the Boko Haram insurgents have wreaked havoc through the towns and villages in the northeast of Africa’s most populous nation, thousands have fled to the relative safety of Yola, in Adamawa state.

The UN says more than a million people have been displaced, with more than 200,000 having fled to neighbouring Cameroon, Niger and Chad.

While the Nigerian government and NGOs have responded to the crisis by supplying food aid, hygiene kits and basic shelter; these agencies are stretched to capacity.

“Security-wise we’re now starting to cope with the crisis, but on humanitarian grounds we really need help. There’s a need for support from international and humanitarian groups” said Yinka Afolabi, humanitarian co-ordinator at Oxfam Nigeria.

In Yola, families are trying to make sense of the violence they’ve been subjected to. “There’s no hope. We’ve lost everything to the insurgents” Mr Glavda said.

The militants looted and burned his village. Mr Glavda’s two herds of cattle were not spared, taking his only means of paying  for his remaining 18 children’s education.

He said: “We have the lowest expectations a human being can have. We cannot move freely, we’ve little food, and our children don’t go to school. This is the worst time of our lives.”

However, there has been some progress since Nigeria reached a new military alliance with its eastern neighbours. After months of losing ground to Boko Haram, Nigerian forces are now conducting offensive operations against the insurgents. Forces from Nigeria, Chad and Niger killed 300 militants as they gained control of Malam Fatouri and Damasak recently.

However, in Damasak, near the border with Niger, soldiers reportedly discovered the bodies of more than 70 people – many with their throats slit: another brutal reminder of the violence that has affected many of those displaced.

News of military victories provides a welcome relief for many. Mike Omeri, a government spokesman, told The Independent on Sunday: “Nigerians are very happy, very proud, that more territories have been taken. The morale of the troops is now very high.”

President Goodluck Jonathan – perhaps with an eye to the election – told the BBC in an interview last week that Boko Haram was getting “weaker and weaker” and that the Nigerian government would be back in control of all its territory in no more than a month.

Such forecasts are not new, but the seeming improvement in security means many of the IDPs will now get the opportunity to vote. “We are eager to vote,” said Niyu, a 25-year-old refugee. “Even if we are in the bush we will vote because that is our right as citizens of this country.”

In the Kwalaya IDP camp in Yola, Pastor Daniel Tumba is hopeful of returning to his village. On 7 September last year, during a packed Sunday school service, Boko Haram militants invaded the small village of Michika, firing indiscriminately at his congregation.

“We just ran and didn’t look back,” he says. “We hid in the bush and we haven’t been back home since.” He says most of the houses in Michika were burnt, “so when we reach home we are going to start a new life altogether”.