LAGOS, Nigeria (AP) — Nigerian drug agents Saturday surrounded the house of a senator-elect wanted by the United States in a nearly 20-year-old heroin deal that was the alleged basis for the TV hit “Orange is the New Black.”

Buruji Kashamu is under house arrest, according to the chairman of Nigeria’s National Drug Law Enforcement Agency, Ahmadu Giade.

But Kashamu’s spokesman, Austin Oniyokor, said, “He has not been arrested but there is a siege to his house and an attempt to forcibly take him.” He said the agents did not have an arrest warrant .

Giade said Kashamu, 56, will appear in a federal high court Monday to start extradition proceedings to the United States.

He said agents raided Kashamu’s home in Lagos at around 5 a.m., before dawn Saturday. Armed agents were seen surrounding the property Saturday night.

Kashamu has already been suing a Nigerian court to prevent attempts to extradite him. 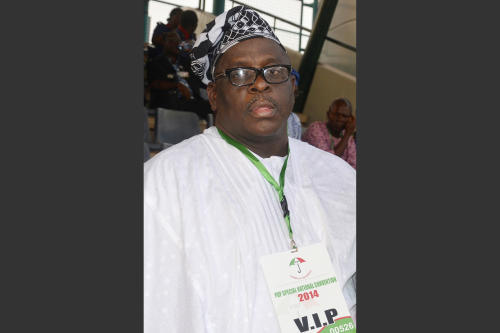 FILE – In this Sunday, Oct, 12, 2014 file photo, Buruji Kashamu attends a primary election event for Nigerian President Goodluck Jonathan in Abuja, Nigeria. On Saturday, May 23, 2015, drug agents surrounded the house of the senator-elect wanted by the United States in a nearly 20-year-old heroin deal that was the alleged basis for the TV hit “Orange is the New Black.” (AP Photo)

He had become a powerful politician and financier of President Goodluck Jonathan’s party. Jonathan lost the March elections but Kashamu was elected a senator in balloting opponents said was rigged.

A Chicago grand jury in 1998 indicted Kashamu for conspiracy to import and distribute heroin in the U.S. Kashamu has said it is a case of mistaken identity and that prosecutors really want the dead brother he closely resembles.

He said Saturday’s development was a political conspiracy, according to his spokesman.

“This latest onslaught is a confirmation of the alleged plot to illegally abduct him in spite of the pending suit against this illegality,” Oniyokor said.

The move comes days before Jonathan is to step down. President-elect Muhammadu Buhari takes office Friday.

The U.S. had failed to ask Nigeria to extradite Kashamu before now. In September, Chicago Judge Richard Posner refused a motion to dismiss Kashamu’s case and quoted the U.S. Justice Department as saying that “the prospects for extradition have recently improved.” Posner also noted that “given Kashamu’s prominence … the probability of extradition may actually be low.”

A previous request to extradite him from Britain failed in 2003. Kashamu spent five years in a British jail before he was freed over uncertainty about his identity. He was carrying $230,000 when he was arrested there.

A dozen people long ago pleaded guilty in the case including American Piper Kerman, whose memoir was adapted for the Netflix hit “Orange Is The New Black.” Kerman’s book never identified Kashamu by name, only citing a West African drug kingpin.

Former Nigerian President Olusegun Obasanjo has chastised Jonathan for his perceived protection of Kashamu and warned that “drug barons … will buy candidates, parties and eventually buy power or be in power themselves.”

Kashamu has said that Obasanjo did not call him a drug baron when they were allies and while he spent some $20 million ensuring their party’s success at 2011 elections.