ABUJA, Nigeria (AP) — Nigeria has extended voting to Sunday after problems occurred as millions turned out Saturday to vote in a presidential election that analysts say is too close to call between President Goodluck Jonathan and former military dictator Muhammadu Buhari.

The polling will continue Sunday in some areas where new machines were not reading voters’ biometric cards, said Kayode Idowu, spokesman of the Independent National Electoral Commission. The areas where voting will be extended include Lagos, Nigeria’s largest city on the Atlantic coast.

In other areas, vote counting has already begun, he said.

Nearly 60 million people have cards to vote and determine the outcome of the first election in Nigeria’s history where an opposition candidate has a realistic chance of defeating a sitting president. The vote takes place amid an Islamic insurgency in Nigeria’s northeast in which thousands have been killed. 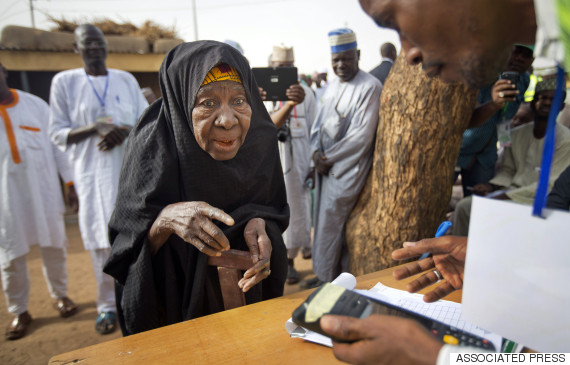 An elderly Nigerian woman arrives to validate her voting card using a fingerprint reader, prior to casting her vote later in the day, in the home town of opposition candidate Gen. Muhammadu Buhari, in Daura, March 28, 2015. (AP Photo/Ben Curtis)

Two car bombs exploded at two polling stations in southeast Enugu state but did not hurt voters, police said. Police detonated two other car bombs at the scene of the first explosion, a polling station set up at a primary school, said Enugu state police Commissioner Dan Bature. Boko Haram has been blamed for many car bombings but was not immediately suspected in the southeastern blasts far from its northeast stronghold.

President Goodluck Jonathan denied the attacks, saying the state governor told him there were no blasts.

The oil-rich and heavily populated south is deeply contested and has become a political battleground since the main opposition parties united in a coalition two years ago, causing dozens of defections from Jonathan’s party.

The official website of the Independent National Electoral Commission was hacked but was quickly secured, said officials who said the site holds no sensitive material.

Thousands of people forced from their homes by the Islamic uprising lined up to vote at a refugee camp in Yola, capital of northeast Adamawa state, which is hosting as many refugees as its 300,000 residents. 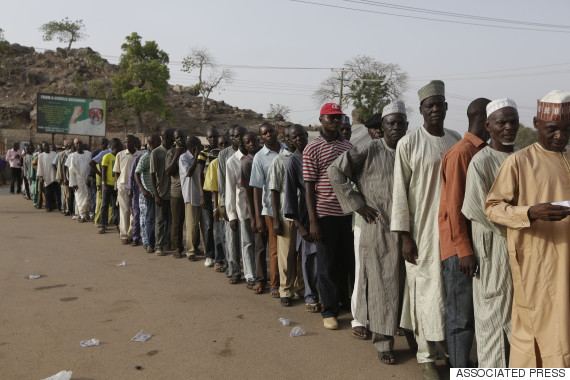 Registration to vote began late in most places, delaying the scheduled start of voting in the afternoon. Men and women formed separate lines at many polling stations.

Earlier, officials rushed across the country delivering ballot materials by trucks, speedboats, motorcycles, mules and even camels, in the case of a northern mountaintop village.

Good humor turned to anger and altercations as people waited hours and temperatures rose up to 100 degrees (37 degrees Celsius) to be registered to vote, only to find that machines were not reading new biometric voting cards.

Even the president was affected. Three newly imported card readers failed to recognize the fingerprints of Jonathan and his wife. He returned two hours later and was accredited without the machine using visual identification. Biometric cards and readers are being used for the first time to discourage the kind of fraud that has marred previous votes.

Afterward, Jonathan wiped sweat from his brow and urged people to be patient as he had, telling Channels TV: “I appeal to all Nigerians to be patient no matter the pains it takes as long as if, as a nation, we can conduct free and fair elections that the whole world will accept.”

Jonathan cast his ballot later in the day. 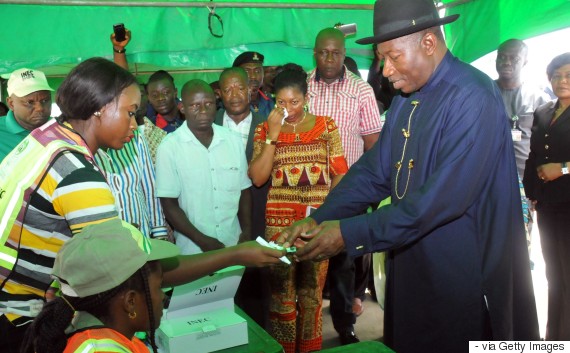 Afterward, Jonathan wiped sweat from his brow and urged people to be patient as he had, telling Channels TV: “I appeal to all Nigerians to be patient no matter the pains it takes as long as if, as a nation, we can conduct free and fair elections that the whole world will accept.”

Social media was abuzz with the problem. One tweeter said they solved their issue by having an official remove the protective plastic film from the screen supposed to read a fingerprint on the card reader.

Trader Angela Okele expressed concern after getting accredited in Port Harcourt, Nigeria’s southern oil capital. “The process is too slow, if it continues like this many people will not be able to cast their votes today,” she said.

Electoral officials stressed that once voting starts it will not end until the last person in line has voted, even if it takes all night. 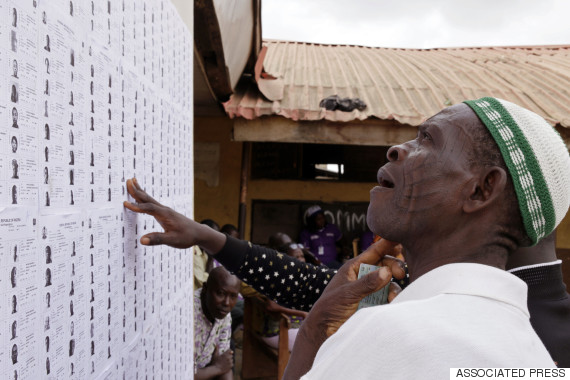 A man looks for his name on a list before he registers to vote, prior to casting his ballot later in the day in Lagos, Nigeria, March 28, 2015. (AP Photo/Kunle Ogunfuyi)

Social media was abuzz with the problem. One tweeter said they solved their issue by having an official remove the protective plastic film from the screen to read a fingerprint on the card reader.

Voting began promptly in a Christian neighborhood of northern Kaduna city though voters’ privacy was not respected. An AP reporter watched as people milled around a booth where a voter is supposed to be alone. Then, voters handed unsealed ballots to an official who put the papers into the ballot box. Voters are supposed to put their own ballots into the box.

Jonathan and Buhari are front-runners among 14 candidates in the high-stakes contest to govern Africa’s most populous and richest nation. In addition to the Islamic uprising, Nigeria is beset by militants demanding a better share of oil revenues who attack petroleum installations in the south and deadly land disputes across the middle of the country between semi-nomadic Muslim cattle herders and mainly Christian farmers.

“We need many changes in Nigeria,” government worker Lawal Dahiru said in Buhari’s home town of Daura. “We have security problems, no job opportunities, we need infrastructure like roads, electricity, water supply, and to mechanize our agriculture.” 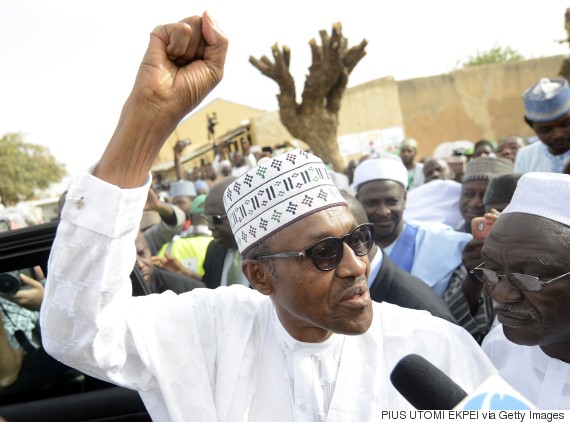 This is only the eighth election since Nigeria’s independence from Britain in 1960. In a country steeped in a history of military coups and bloodshed caused by politics, ethnicity, land disputes, oil theft and, lately, the Boko Haram Islamic uprising, the election is important as Africa’s richest nation consolidates its democracy.

Nervous foreign investors are watching as Nigeria is Africa’s largest destination for direct foreign investment though its oil-dependent economy is hurting from slashed petroleum prices.

Nigeria’s military announced Friday it had destroyed the headquarters of Boko Haram’s so-called Islamic caliphate and driven the insurgents from all major areas in northeast Nigeria. There was no way to verify the claim, which seems unlikely. Critics of Jonathan have said recent military victories after months of ceding territory to the Islamic extremists are a ploy to win votes — a charge the presidential campaign denies.

The failure of Jonathan’s administration to curb the insurgency, which killed about 10,000 people last year, has angered Nigerians in the north.

International outrage has grown over another failure — the rescue of 219 schoolgirls kidnapped by Boko Haram nearly a year ago. The extremists have abducted hundreds more since then, using them as sex slaves and fighters. 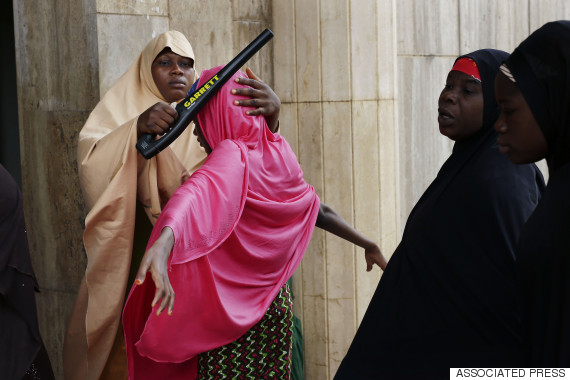 Nigerian women go through a security check as they enter the main mosque for Friday prayers in the capital Abuja, March 27, 2015. (AP Photo/Jerome Delay)

The Islamic uprising has exacerbated relations between Christians like Jonathan, who dominate the oil-rich south, and Muslims like Buhari who are the majority in the agricultural and cattle-herding lands of the north. The population of 170 million is almost evenly divided between Christians and Muslims.

Some 1,000 people were killed in rioting after Buhari lost to Jonathan in the 2011 elections. Thousands of Nigerians and foreign workers have left the country amid fears of post-election violence.

In 2011, there was no doubt that Jonathan had swept the polls by millions of votes.

Now the race is much closer. The game-changer that transformed Nigeria’s political landscape came two years ago when the main opposition parties formed a coalition and for the first time united behind one candidate, Buhari.