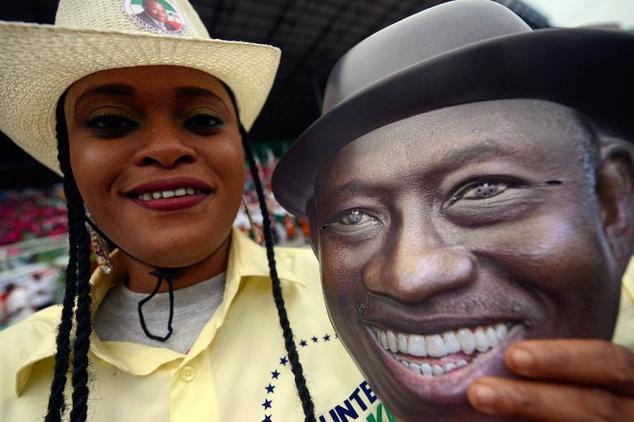 Yenagoa (Nigeria) (AFP) – Kennedy Tonjo-West is unhappy at the way Nigeria’s main opposition party and northern politicians have been criticising President Goodluck Jonathan’s record in the run-up to next month’s election.

“We are not happy with the constant attacks on the person of Jonathan in the north and if they don’t stop such molestation we will be forced to retaliate,” he told AFP.

“We will fight back. If and when we do, Boko Haram will be child’s play. We shall prove to them that no-one has a monopoly of violence.”

Such threats are not to be taken lightly, with Boko Haram having killed more than 13,000 people since 2009 and the rebels’ territorial gains in the north posing an increasing threat to Nigerian sovereignty.

But Tonjo-West is a former Niger Delta militant who commanded some 300 men when lawless gangs wreaked havoc on the maze of creeks, swamps and rivers of the southern oil-producing region in the 2000s.

He is not a lone voice: other former oil rebels, including leaders of the shadowy Movement for the Emancipation of the Niger Delta (MEND), have also threatened violence if Jonathan doesn’t win.

Unrest in the Delta hit production in Africa’s leading crude producer and Nigeria, reeling from the current fall in the global price of oil, can ill afford to dismiss the latest threats as mere bluster.

Jonathan, a southern Christian from the Ijaw ethnic group, is credited in the creeks with having brought relative peace, allowing production to rise to 1.75 million barrels a day.

Not to re-elect him would be ungrateful, as the spoils of crude are shared across the whole country, said Annkio Briggs, from the Niger Delta Self-Determination Movement.

“If for any reason Jonathan is denied power come February 14, we will renew our agitation and this time, we shall ask for 100 percent ownership and control of our resources,” she said.

“If our son is not good enough to be president, then our oil cannot be available for other regions.

“We shall tell the Yorubas to go and use their cocoa, the Hausas their groundnut and Igbos their palm produce.”

Behind the warnings are a mix of ethnic rivalries, particularly between the Christian south and Muslim north, and fears for the future of the amnesty that saw rebels trade guns for money, training and jobs.

What drove the Delta militants was the belief that the black gold under their feet was theirs but that they were being severely short-changed from the wealth created by the government and foreign oil majors.

The amnesty was introduced in 2010 by Jonathan’s predecessor, Umaru Musa Yar’Adua, before he died in office.

Since then, it has paid out about 230 billion naira ($1.2 billion, one billion euros) to some 30,000 rebels, according to the programme’s spokesman, Daniel Alabrah.

Some 18,000 people have received educational and vocational training in sectors such as aviation, engineering, and the oil and gas industry or started their own businesses.

“It was intended to wind up in five years (at the end of 2015),” said Alabrah. “But because of the additional militants and limited budget, there might be need for an extension.”

Rebels are paid a monthly stipend of 65,000 naira.

The amnesty certainly hasn’t solved all of the Delta’s problems: oil theft, from vandalism of pipelines to illegal siphoning known as “bunkering”, continues at astonishing levels.

Kidnappings are rife and most people of the Delta still live in crippling poverty.

But uncertainty over the scheme’s future and the position of Jonathan’s main rival Muhammadu Buhari, of the main opposition All Progressives Congress (APC), has made it an election issue in the Delta.

“The APC has previously been critical of the amnesty programme and it remains to be seen whether Buhari would maintain the programme in its current form or seek to discard it,” said Thomas Jansen, a specialist in Niger Delta militancy.

Maintaining stability and oil production in the Delta will be a “strategic priority” for whichever party wins, said Jansen, from security consultants Control Risks in London.

The APC is likely to broker a deal with the former rebels, he said, but there was a “real perception”, particularly among the Ijaw, that their fortunes will wane if Jonathan loses.

“We believe that an upsurge in violence and attacks targeting the oil and gas industry is likely if Jonathan is not re-elected, particularly if his re-election bid is seen to have been scuppered,” he added.