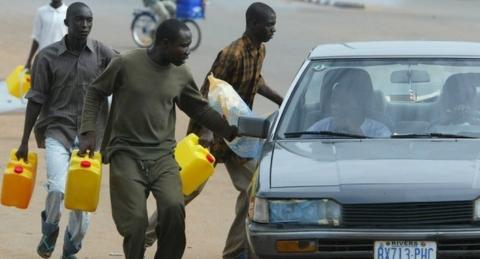 At one gas station in Lagos, crowds push at the gates waving empty jerry cans. Cars queue for a kilometre down the road creating gridlock.

Similar scenes are being repeated at almost every petrol station across Nigeria.

“I’ve been here since 4 a.m. It’s not good,” says local resident Abdulsalam Mohammed as he finally drives his car to the petrol pump. “Now it’s almost 3 p.m. Nobody can work today.”

“We are an oil producing country, very rich, a giant in Africa,” says Seun Olewale, another driver who is carrying empty fuel cans. “But the experience we are getting now is so hard.”

The shortages have been going on since March despite the fact that, according to the Nigerian National Petroleum Corporation, Nigeria produces about 2.5 million barrels of crude oil per day.

The problem is Nigeria does not have the capacity to refine enough of its own oil into fuel to meet the needs of its population of 150,177 million people.