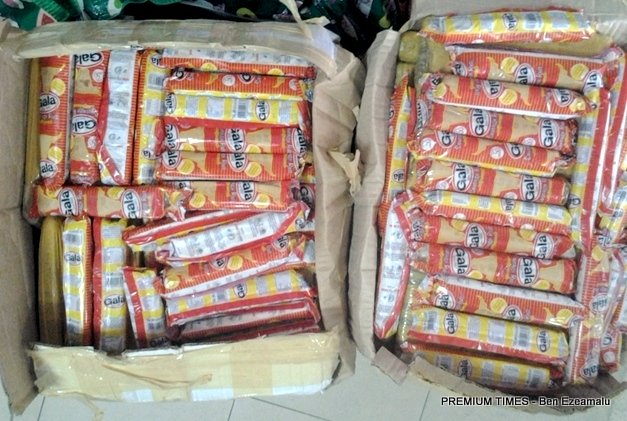 Friday Ogbonna, 33, was arrested at the Murtala Mohammed International Airport, Lagos, during a screening of passengers on their way to China, the anti-narcotics agency said in a statement Wednesday.

In addition to Mr. Ogbonna, the agency also arrested David Famolu, 34, and Joy Osamunyi, 26, on their way to Dubai with 4kg and 19.640kg of cannabis respectively.

Ahmadu Giade, NDLEA’s Chairman, said the arrests were made following intelligence reports and intense covert operations by the agency.

“It is pertinent to alert members of the public of fresh plot by drug barons to smuggle cannabis to countries with capital punishment for drug trafficking because of the high profit involved,” said Mr. Giade.

“Drug barons are wicked and callous. They are only interested in making money even at the risk of others sacrificing their precious lives.”

According to the agency, Mr. Ogbonna told investigators that he was given N100, 000 to smuggle the drugs to China.

“My friend in China gave me N100, 000 to take a bag to China. The last time I travelled to China, he assisted me,” said Mr. Ogbonna, a trader at the Onitsha main market.

“When he gave me the money to take the bag containing gala to China, I thought he was doing me a favour I never knew he was digging my grave. After my arrest, I feel bad and regret my action. I am married with a child.”

Mr. Famolu, a laptop dealer in Lagos, said he was introduced into the smuggling business by a friend.

“I bought the cannabis myself for N44, 000. I was introduced into drug trafficking by a friend who assisted me with my travel documents,” Mr. Famolu said.

“He told me that if I can bring 4kg of cannabis to Dubai that he will pay me half a million naira. That was what encouraged me to take the risk. I blame myself because I should have listened to my conscience.”

Ms. Osamunyi told investigators that she was unaware her bags contained illegal drugs.

“I lost my parents and I sell shoes and female clothes and bags to earn a living,” said Ms. Osamunyi, who hails from Benin, Edo State.

“My friend in Dubai told me that somebody will give me foodstuff to take to him. That was how I collected the bags from the person she sent to me.

“I still find it difficult (to believe) that this will happen to me but I have learnt a bitter and painful lesson in my life.”

Mr. Giade said that the NDLEA had foiled several attempts by drug barons to smuggle cannabis in foodstuff outside the country.

While calling on people to resist the antics of drug barons, the NDLEA boss promised to adopt measures aimed at increasing the effectiveness of drug eradication efforts. Such measures include timely detection of drugs and exposure of modes of operation by drug syndicates.

The suspects will soon be charged to court, according to the agency.