LIFE AS A NIGERIAN 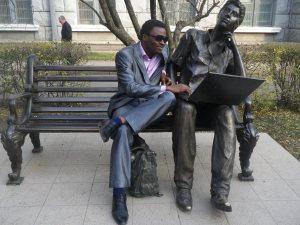 Nigerian society  varies greatly between urban and rural areas, across ethnic and religious borders, and with levels of education. Still, most Nigerians share a strong attachment to family and especially to children, clearly differentiated roles for men and women, a hierarchical social structure, and the dominance of religion in shaping community values.

Nigerian society functions in a highly patriarchal fashion, with men exerting broad control over the lives of women, who are less educated and have limited access to health and social services. Women work far longer hours than men. They perform virtually all housework and child care, as well as (for most women) many hours of income-earning work, especially farming. The exceptions are in some southern states, where women are more active in trade and exert considerable political influence. In northern Muslim communities, especially cities, women are confined to home according to purdah (the seclusion of women from public places). Many women in purdah participate in a hidden trade in craft articles, prepared foodstuffs, and other goods, using children as couriers.

Polygyny is widely practiced among Muslims, among adherents of traditional religions, and among Christians who belong to independent African churches. Among northern Muslims and in many more traditional societies, most girls enter family-arranged marriages near the age of puberty. The daughters of more educated populations, particularly in the south, tend to marry when they are in their late teens or early twenties. Men usually marry at a later age, especially if they come from poorer families that are unable to afford the high cost of weddings and bride-price (payment given to the bride’s family by or on behalf of the future husband).

Social life has traditionally revolved around ceremonies: weddings, infants’ naming ceremonies, and public performances associated with cultural and religious holidays. Young adult males living in cities enjoy going to cinemas, dance clubs, and bars for recreation. Some Muslim women, for example among the Hausa, have their own social institutions revolving around the bori, a cult of spirit possession. Bori ceremonies provide women with a forum for interaction that is relatively free of male control, and offer explanations and remedies that help women cope with problems such as the death of their children.

Clothing in Nigeria symbolizes religious affiliation, wealth, and social standing. Northern Muslim men wear long, loose-fitting garments such as the caftan, together with colorful embroidered hats or (among traditional officials) turbans. Most Yoruba men also wear elaborate gowns and hats, somewhat different in style. Many Nigerians in the south wear casual Western-style dress. Women wear wraparound garments or dresses, typically made from very colorful materials, and beautiful head-ties that may be fashioned into elaborate patterns.

Diets vary regionally and between city and country. Grain-based dishes such as tuwo da miya, a thick sorghum porridge eaten with a spicy, vegetable-based sauce, dominate the northern diet. Dishes made from root crops, such as pounded yam and gari (a granular product made from cassava), are more prevalent in the south. Northerners eat more meat, either in sauces or as kebabs known as tsire. Yogurt and soured milk produced by Fulani pastoralists form an important part of rural northern diets. Modernization and poverty have made cheaper bulk food staples such as cassava, maize (corn), rice, white bread, and pasta increasingly important in both rural and urban areas. Muslims generally do not approve of drinking alcohol, especially northern Muslims, who tend to prefer tea and soft drinks. In the rest of the country, it is common to drink commercially brewed beer or traditional drinks such as beer made from sorghum or millet and palm wine. Kola nuts are used widely as a stimulant, especially in the north.

Nigerians, particularly youth, are avid sports fans and participants, and by far the most loved game is soccer, known as football. At the 1996 Olympic Games in Atlanta, Georgia, Nigeria’s national team, the Green Eagles, won the gold medal. Several Nigerian footballers have achieved prominence playing professionally in Europe, and all major cities are represented in Nigeria’s highly competitive national football league. Nigerians have also excelled internationally at track and field, particularly in shorter-distance races, and in boxing. Other popular sports are field hockey, basketball, and table tennis.