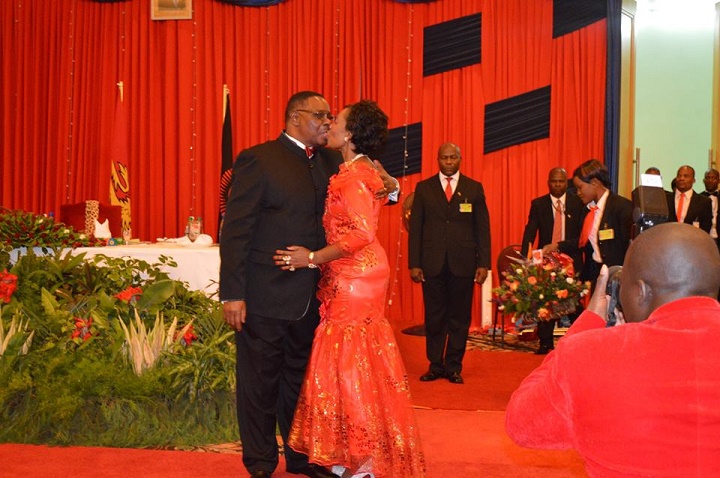 Malawi’s latest salacious scandal involves the highest office in the country. The manner in which President Peter Mutharika kissed his wife, Grace Mutharika during a much publicized Democratic Progressive Party Valentine’s day fundraising dinner has caused quite a stir in Malawi and on social media.

The event took place on Saturday, February 14th, 2015 in Lilongwe. Dawned in a black Chinese collar suit with a red bow tie, Mutharika presented a bouquet of flowers to his wife in celebration of Valentines Day. Then after being coaxed by the event’s host, he kissed the First Lady who was clad in a red dress in front of attendees and television cameras who were broadcasting the event to the entire nation.

Since this controversial public display of affection, Malawi has been abuzz with regards to the nature and length of the kiss in a controversy I dub ‘kissgate’.

Some of Malawi’s social media communities have been particularly harsh on Mutharika. Critics have argued that the President should not have kissed in wife in public because it was contrary to Malawian culture. They called the act of public kissing a “taboo” and have made references to it as evidence of moral corruption and cultural erosion in Malawi. They argued that kissing in public was something that was ‘unMalawian” and stemmed from Western values. Adding to the accusations that it was not Malawian, his decision to wear a Chinese suit was also came under attack.

As others scrutinized photos or replayed the video of the kiss, they argued that the kiss itself was alright but that the use of the presidential tongue in kissing for television was the real issue at hand. They argued that using ones tongue to kiss ones wife was not befitting for the highest office in the land and called it “disgusting”. They would have preferred that the President gave his wife a peck on the lips at such a function rather than what they perceived was a French kiss, which indicates an overt sexual act. Detractors alluded that his kiss that was too long, too fervent and hence, sloppy. One such commentator on the Nyasatimes was so disturbed and agitated by the presidential couple’s kiss that he opined, “Get a room you slobbering, couthless (sic) nincompoops!”

Many others were further irked by the accompanying comments that President Mutharika made to his wife during the presentation of the flower: “on this special day, I want to say thank you! Thank you for always being there for me through the frights and the cold nights….” The references to ‘cold nights’ were highly problematic for the country’s conservative citizens who would have rather have had that conversation relegated to the bedroom and not a public event.

Others on social media took it as an opportunity to use it as a platform to comment on his overall performance as a president. Chakwanuleka notes that “This fellow is a non performer (sic) and this is what he can do best”. More serious economic connections were also made in relation to who paid for the flowers and the party event. A few commented that regardless of who paid for it, holding such a lavish event in the middle of an on-going national flood disaster was insensitive.

Not everyone of course was against the president’s actions. Some Malawians were  content that on this Greco-Roman Holiday, Malawian President Peter Mutharika kissed his wife French style in a Chinese suit. After all, are we not living in a globalized era where cultures cross? His supporters state that kissing in public was  no more “unMalawian” than “wearing clothes” or doing anything we want to wrongly label “Western”. Others argued that it gave the President more of a human face and applauded him for being down to earth. They called it a “romantic” gesture on his part. Many suggested that it was a good move on his part to be able to show respect for his wife in this way. They argued that it would encourage other Malawian men to show affection and commitment to their wives in public as well.

Source: Africa On The Blog