Issue Of The Year Chibok girls: the bone in Nigeria’s throat 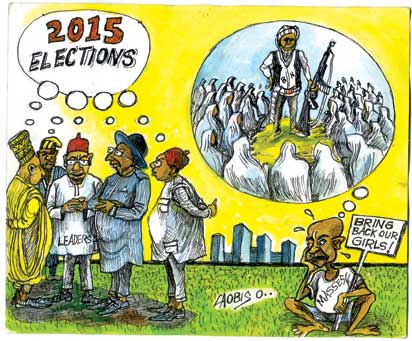 ON the night of 14 April 2014, the insurgents capitalised on security laxity in Government Secondary School, Chibok, in the southern end of Borno State, and swept away 276 girls. The girls were reportedly staying back to write their final school certificate exams. Though  the West African Examination Council, WAEC, had expressed misgivings about the safety of the candidates, the Borno State Government assured WAEC that there would be adequate security, as Chibok was not one of the areas in the State considered “unsafe”.

The circumstances under which the wholesale abduction took place created a lot of furore worldwide, sparking allegations in certain quarters that it must have been a carefully organised conspiracy, since there was only one unarmed security personnel on duty that night at the school premises.

The boarding school was in darkness, and the children of the teachers and senior officials of the school managed to be absent when the abductors came. Certainly, it was one of the signs of the failure of leadership and governance at all levels. Intense recriminations across the political divides followed the incident.

A reasonable number of the kidnapped girls escaped, leaving a total of 219 still in captivity. The Chibok girls’ abduction ignited a global outrage and thus was born the hashtag campaign: #Bring Back Our Girls (#BBOG) along with other platforms, which within a matter of weeks, generated millions of signatures calling for the intensification of efforts to rescue the girls. Friendly foreign countries pledged a variety of supports for the rescue effort and the war on terror, though most of them turned out to be mere lip services. Predictably, media houses in Nigeria commenced daily countdowns to keep efforts towards the rescue effort in focus. A former Minister of Education, Dr Oby Ezekwesili, led a local chapter of the #BBOG in Abuja. It made several futile efforts to storm the Presidential Villa and confront President Goodluck Jonathan personally.

An overwhelmed President Jonathan, on 5 May, pledged, “Wherever these girls are, we will get them out soon”. But that undertaking has petered into a philosophical handover of the matter to fate. In his recent media rounds, the Senior Special Adviser to the President on Public Affairs, Dr Doyin Okupe, said there was now no time limit if the girls are to be brought back alive, since any attempt to storm a rescue could lead to their being killed by the terrorists as we witness with similar attempts around the globe even by America.

The kidnap of the Chibok girls was a great strategic masterstroke for the insurgents. It gave their demonic campaign a massive boost. With confusion and recriminations reigning supreme, and great political capital being made of the issue by the two main political parties, the insurgents saw that the abduction tied the hands of the Federal Government.

They leveraged the apparent weakness of government and leapt out of Sambisa Forest, where they had been pinned during the period Lt-Gen Azubuike Ihejirika was the Chief of Army Staff.

They started seizing towns and villages, some of which included Bagga, Bama, Gwoza, Chibok and Konduga in Borno State, and later swept south into Adamawa to capture Michika, Madagalli, Hong and Mubi, including Vimtim, home town of Air Marshall Alex Badeh, the Chief of Defence Staff.

Nigerians were shocked when, on 17 October, a presidential adviser, Hassan Tukur, and later CDS Badeh himself, announced a ceasefire with the insurgents, saying they had agreed to release the girls based on certain terms and conditions. It turned out to be a humiliating hoax. The insurgents seized that opportunity to make massive territorial gains. By now, with about 700,000 internally displaced persons languishing in refugee camps, about 15,000 people lost to the insurgency and unquantifiable loss of schools, churches and mosques, it dawned at last on some that Nigeria was faced with a genuine challenge to her territorial integrity. The insurgents   were no longer a ragtag local outlaw, and curtailing them required more than mere police action. It had graduated into a multinational Islamist force, just like its peers in the Maghreb, Somalia, Iraq/Syria, Afghanistan, Pakistan and Mali.

The gallantry of our soldiers and the might of the Federal Republic of Nigeria are gathering momentum. Today, most of these territories have been recaptured; the command and control as well as many camps of the terrorists appear to have been smashed. For quite some time now, no further news of territorial gains by the insurgent has been reported, though they appear to have switched again to the use of suicide bombers, deploying women in hijab to hit crowded places in Kano, Maiduguri, Azare, Damaturu and Jos. There have also been a rash of jailbreaks in Minna, Ado Ekiti and Koton Karfe, and the insurgents are suspected to have staged them to free their captured mates.

The kidnap of the Chibok girls was a major coup for the terrorists. It helped them to go further than merely hiding up in Sambisa Forest and harassing rural hamlets. It was a major definer of the war on terror in Nigeria in 2014. It has changed the lives of the abducted girls forever and ground the emotions of their families to the dust. No one knows what will eventually become of the girls and when their ordeals will come to an end.