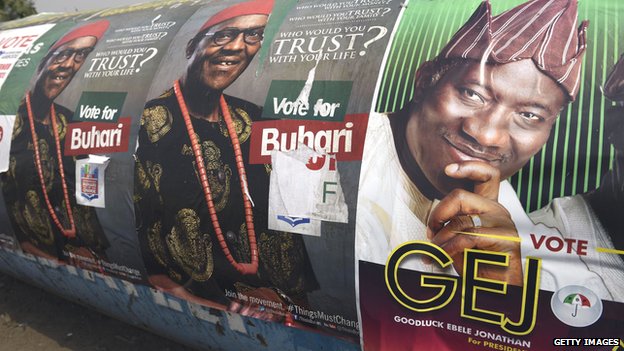 The rise of Islamist group Boko Haram in the north-east has put security at the centre of their election campaigns but both candidates have clashed over how to handle the insurgency in Africa’s biggest oil producer.

Past elections have been marred by violence and allegations of vote-rigging. Since campaigning began in mid-November, both the ruling and opposition camps have reported violent attacks against their supporters.

On 3 February, clashes between rival supporters in the northern state of Kaduna left eight dead. 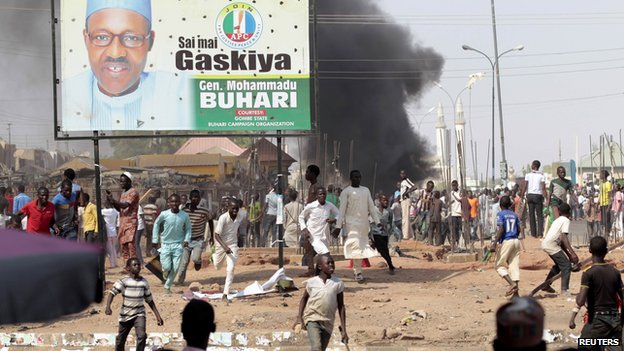 A day earlier, three people were killed and 18 injured when a female suicide bomber struck close to a campaign rally by President Jonathan in the northern state of Gombe.

On 7 February, just a week before they were originally due, the Independent National Electoral Commission (Inec) announced a six-week delay.

It said the military had advised it would be unable to provide security because its soldiers were committed to the fight against Boko Haram.

Who are the main candidates?

Fourteen candidates are contesting the election but only Mr Jonathan and Gen Buhari have a realistic chance of winning.

President Jonathan is seeking a second four-year term. His People’s Democratic Party (PDP) has dominated Nigerian politics since civilian rule was restored in 1999 but now faces its toughest election challenge from Gen Buhari’s alliance of opposition parties, the All Progressives Congress (APC). 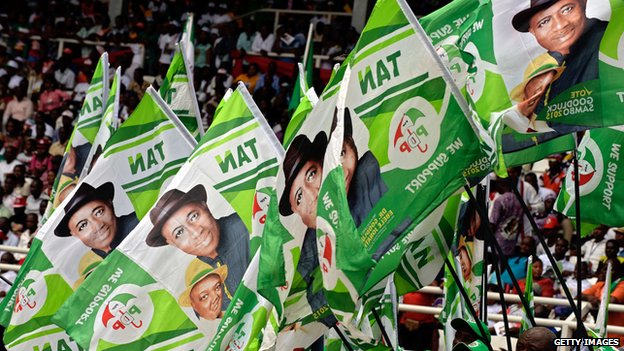 Supporters of Goodluck Jonathan turned out in large numbers for a rally in Port Harcourt, south Nigeria

Mr Jonathan is expected to do well on homeground in the mainly Christian south. But his government has been fiercely criticized for its failure to combat Boko Haram in the north-east. During campaigning, he has pledged to do “everything humanly possible” to end the violence.

Former military ruler retired Gen Buhari has lost the last three elections but some sections of the Nigerian media are predicting a win this time. He has described the PDP’s 16-year rule as “a disaster for the country and its citizens”.

He is said to be extremely popular in the mainly Muslim north and has in the past supported the implementation of Islamic law there. 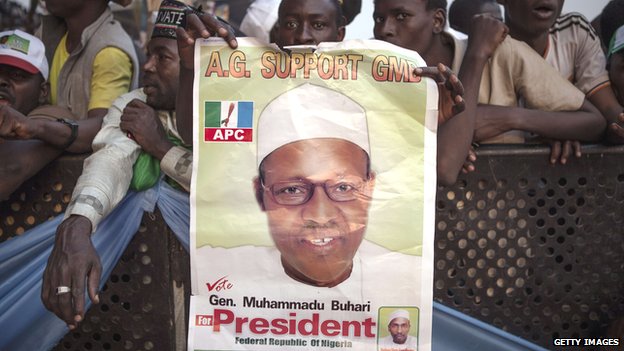 Gen Buhari has made security a priority during his presidential election campaign. He has promised to crush the Islamist insurgency within months if elected.

He has publicly denounced Boko Haram repeatedly, branding them “bigots masquerading as Muslims.” Last July, he survived an attack on his convoy allegedly carried out by the group.

Now fears are rife that Boko Haram’s presence in the north may disenfranchise voters in what is seen as a Buhari stronghold.

Gen Buhari is also expected to do well in the south-west around the commercial capital Lagos.

But former militants in the oil-rich southern Niger Delta have endorsed Mr Jonathan’s candidacy and warned of violence if Gen Buhari wins. The APC party has condemned their threats as “barbaric”.

Where they stand on key election issues?

While the personalities of the two main candidates have been at the forefront of this election campaign, certain key issues – namely insecurity, elite corruption among high-profile politicians and business leaders and the state of the economy – have become increasingly important to voters.

How does the electoral system work?

The Independent National Electoral Commission (Inec) has promised a clean ballot. All 14 candidates have signed an agreement binding them to credible and non-violent elections. Official campaigning is due to two days before polling day.

To win in the first round, a candidate needs more than 50% of the national vote and at least 25% of the votes in two-thirds of Nigeria’s 36 states. 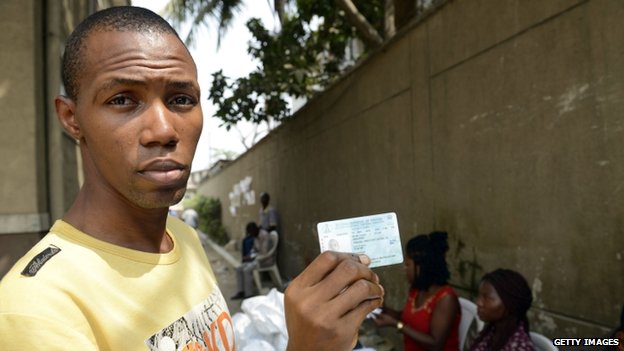 Biometric cards will be used for the first time but the Inec says less than half of the nearly 70 million eligible voters have obtained their identity cards. The minimum voting age is 18.

Polls will open at 0800 local time (0700GMT). All voters must be present at their designated polling station by 1300 local time (1200GMT) at the latest to be allowed to cast their ballot. Polls will close when the last person in the queue has voted.

The authorities say 360,000 police officers and sniffers dogs will be deployed at strategic areas.

Inec has approved the presence of international and local observers to monitor the elections, although the European Union says its observers will not deploy in the north-east due to security concerns. 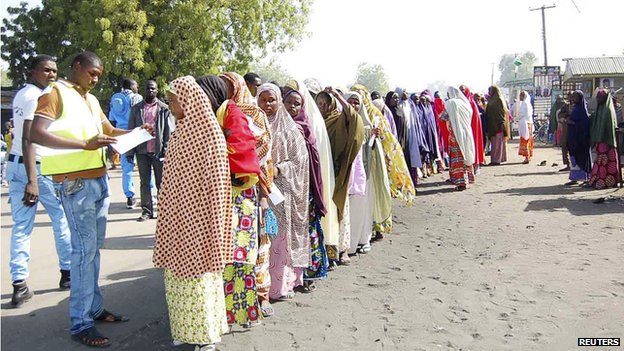 Parliament amended the electoral law on 15 January allowing an estimated one million displaced people by the insurgency to cast their votes but as yet no system is in place.

What happens if there is a run-off?

If there is no outright winner in the first round, the law states a run-off election must be held within seven days. But Inec has said it is doubtful whether a run-off vote could be organized in a week. Victory in a run-off election is by simple majority.

What about the parliamentary and gubernatorial elections?

Parliamentary elections have also been put back to 28 March, with 739 candidates vying for a place in the 109-seat Senate and 1,780 seeking election to the 360-seat National Assembly.

Nigerians will vote again on 11 April to choose new governors and state assemblies for 29 of the 36 states.

Like the president, governors are limited to two four-year terms, so this election will see a new set of occupants in many states.

Governors hold huge sway because they allocate federally disbursed revenue and shape policy on development and security in their states.

Among the key states to watch are Lagos, Kano and Rivers – currently in APC hands – because of their large populations and economic power.

Some of these states have budgets larger than those of neighbouring countries, meaning there is fierce competition to run them.