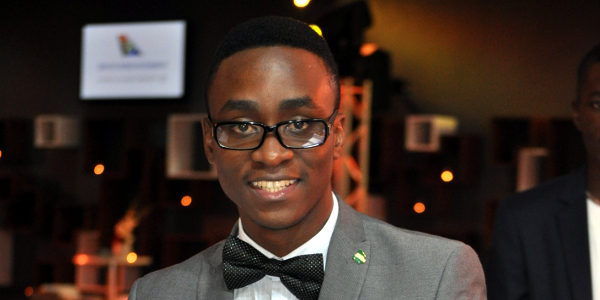 Brought to you by: The Anzisha Prize

A few weeks ago 22-year-old Chris Kwekowe was announced the 2015 Grand Prize winner of The Anzisha Prize, Africa’s premier award for youth entrepreneurship. He is the first Nigerian recipient of the award and takes home US$25,000.

Kwekowe is the co-founder of Slatecube, an online platform he started with his younger brother that seeks to solve the unemployment crisis in Nigeria, and ultimately sub-Saharan Africa.

According to World Bank research, 11 million young people will be entering the job market each year across sub-Saharan Africa, but a large percentage will face unemployment. In Nigeria alone, a study by the British Council revealed that around 23% of fresh graduates will not find jobs, mainly due to these graduates lacking both the skills and experience required by companies and organisations.

Kwekowe realised this while trying to recruit his computer science classmates to work at Microbold Smart-Systems, a company he and his brother started as teenagers to build websites and online solutions for businesses. He noticed many classmates lacked the practical experience required to solve real-life problems.

“I just couldn’t recruit my classmates to work, even temporarily, on projects because they didn’t really have the necessary skills. So we thought: why not create a platform that leverages on users building knowledge and experience so they can get a job at the end of the day?”

The idea behind Slatecube was born, and Kwekowe and his brother officially launched it towards the end of 2014. It offers courses that combines skills development with practical experience, and then matches this to industry-related jobs.

For example, if a user takes a web development course, at the end of it they have to build a web application as their project. Once completed, their projects are listed on the projects board and relevant employers are notified.

Course instructors can be individuals or organisations looking to provide skills training courses on various topics. However, instructors are encouraged to offer at least one free course so the Slatecube team can evaluate them. Thereafter, they can charge users for their online courses, with Slatecube taking a 25% commission.

The company also earns revenue by offering promoted listings for individuals who have completed a course and then want better visibility amongst companies looking to recruit their skills.

In addition to the 300 users who have completed courses on the platform in less than a year, Slatecube has also developed a skills-focused bootcamp for over 1,500 students studying computer science at Nnamdi Azikiwe University in Awka.  The company has also partnered with MIT to offer a course on entrepreneurship.

From medicine to computer science

The oldest of five brothers, Kwekowe has always wanted to do something that would make his parents and younger siblings proud.

“And while I am the first born, I am also actually the shortest in my house, and so I always have to make sure that my presence and impact is felt,” he joked.

Slatecube is not Kwekowe’s first entrepreneurial venture. When he was 16, he started selling farm produce – such as watermelons and fresh vegetables – to earn some cash. With few expenses, and considerable demand for the produce, he made a comfortable profit.

“And I realised that if I can do something like this without much planning or really spending money, maybe I could actually do even bigger things.”

However, having excelled at school, Kwekowe originally planned to study medicine. And while he had always loved computers, he did not imagine how he could turn it into a career, until he took a gap year after high school.

“I would actually say it was the best year of my life,” he emphasised. “It helped me realise where I belonged.”

Being proficient in computers, Kwekowe was often asked to assist a local organisation with IT-related queries. He started researching how programming worked and became fascinated with it.

“I knew this is what I really wanted to do and the next year I wrote [the entrance exam] for computer science. It was a breeze and I got into a tertiary institution to study it.”

In his first year of computer science, he started Microbold which is now the parent company of Slatecube.

While today Kwekowe holds the title as Africa’s top young entrepreneur for 2015, growing Slatecube has not come without challenges and lessons.

“When we first started we were convinced this would be a solution schools would buy into straight away. We spent so much money sending proposals on partnerships to schools and transportation to go talk to them… But it seemed nobody was interested in what we were trying to do. It was 90% a failure – there was only one school that actually responded. It was really devastating for us.”

He realised part of the problem was they were marketing Slatecube to the wrong people.

“It is really more about the students than the school – that was what we realised. When we adjusted our model, and focusing on students and groups that engage students, things changed. It was a learning point for us.”

Kwekowe has also faced personal challenges with being an entrepreneur, most notably when it comes to standing in front of potential investors and selling his business concept.

“I am a developer, a coder. I like sitting in front of my laptop and just drilling out thousands of codes. But I don’t really have confidence to actually present my company and talk to people about it – that is a really big challenge which over time I have been working on.”

“But I am seriously working on that and through market research we are finding out things that we need to let go and things we need to continue working on.”

His advice to other young entrepreneurs is to develop a team with complementary skills.

“It is often best for start-ups to have co-founders. Whether you are a tech person or a business person, you should look for someone who complements your business. For example, if you want to run an e-commerce company and just know about clothes and pricing and distribution, then it is necessary that your co-founder is a technical person. This means you won’t have to spend so much money on recruiting IT skills,” he explained.

Kwekowe hopes to use the $25,000 received from the Anzisha Prize to roll out ambitious plans for 2016. In the first half of the year, the Slatecube team will introduce four bootcamps across Nigeria, which are also open virtually to users across the continent, with the aim of upskilling 6,000 students and job seekers. And during the second half of the year Kwekowe hopes to run various entrepreneurship-focused programmes and events, in partnership with MIT, to assist 200 start-ups run customer-centric, scalable businesses.

The company also has plans for the rest of the continent too.

“We are looking to help over 20 million job seekers across sub-Saharan Africa develop the required skills to land well-paying jobs or start profitable businesses in the next five years, while also helping start-ups scale faster by recruiting highly skilled professionals at little or no cost.”