Financial inclusion grows in Ghana, others on mobile money adoption 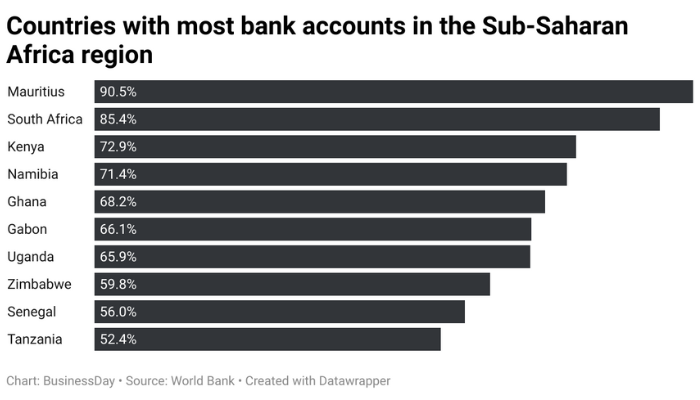 Mauritius, South Africa, Kenya, Namibia and Ghana are among the top five countries in the Sub-Saharan Africa (SSA) region that recorded the most growth in bank account ownership last year driven by a rise in mobile money adoption, a recent Global Findex report shows.

BusinessDay analysis of the report published by the World Bank showed that the percentage of account ownership for Mauritius stands at 90.5 percent, South Africa is 85.4 percent, Kenya (at 79.2 percent), Namibia (at 71.4 percent) and Ghana (at 68.2 percent).

It added SSA is home to all 11 of the world’s economies in which more adults have only a mobile money account than have a financial institution account.

Launched in 2011, with funding from the Bill & Melinda Gates Foundation, the Global Findex report has become a mainstay of global efforts to promote financial inclusion.

The 2021 edition is based on nationally representative surveys of about 125,000 adults in 123 economies during the COVID-19 pandemic.

It contains updated indicators on access to and use of formal and informal financial services, including on the use of cards, mobile phones, and the internet to make and receive digital payments including the adoption of digital merchant and utility payments during the pandemic and also offers insights into the behaviors that enable financial resilience.

Earlier in the year, a report on mobile money by the Global System for Mobile Communication Association (GSMA) said the number of active mobile money accounts (30-day) in the SSA region increased year-on-year by 15.1 percent to 183 million, highest in 10 years.

“A decade of growth in active accounts and transaction values has shown that mobile money is playing an increasingly important role in the daily lives of people in Lower Middle-Income Countries,” the report said.

Mats Granryd, director general at GSMA said the COVID-19 pandemic has made mobile money even more critical, and the data shows this.

Recently, Ghana’s mobile money feature positioned it as the only African country to achieve 100 percent access to financial inclusion in Africa by AfricaNenda, an Africa-led coalition of experts dedicated to accelerating instant and inclusive payment systems across the continent.

The experts said the feat was achieved through the successful implementation of the Mobile Money Interoperability (MMI) system which integrates all payment platforms across banks, fintechs and telcos, allowing all Ghanaians to make and receive instant payments.