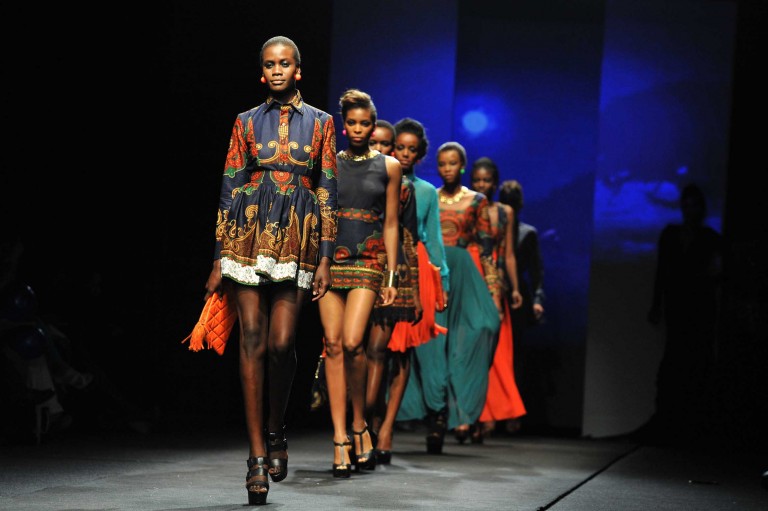 Stereotypes and a lack of personal interaction can be a barrier to understanding and connection. Most people find investing in the unknown and the unfamiliar to be a challenge and I guess that is normal where human nature only leads us to give money to people we trust. The grocery cashier takes my cash because I take my products purchased with me. The car dealer takes my check as I drive off with my car. These are very common transaction for which little explanation is needed. But I am saying it is time to invest money in an African designer.

Designers from across the continent are tapping into an emerging opportunity. Designers from Taibo Bacar (Mozambique) to Adama Paris (Senegal) are bringing local design to the international stage. Introducing an eclectic Mozambican mix of loud colors and rich fabrics, Taibo bumps aside the stereotype of ‘Wax as African.’ The Dakar Fashion Week is the golden child of Adama Paris and a signal to the fashion bigwigs (and unassuming investors) that the industry has grown beyond it normal hubs in Paris, Rome, London, NYC, etc.

Decades of conflict, and continued economic challenges with poverty, have not destroyed creativity…if anything the struggles suppressed a creative energy that is now exploding at the seams (no pun intended). As one local in Senegal once told me, the guy who was once sporting ‘Denver Broncos 2014 Super Bowl Champions’ shirts is now running an emerging computer business and possesses a growing taste for high fashion. (If you do not know, the Denver Broncos did not win the NFL Super Bowl in 2014). Slowly dying is the image of the continent as a dumping ground for fashion misprints and weathered leftovers.

Africa’s creativity is strong across multiple industries – music, film and fashion – which accordingly complement each other in building a global following. Through social media efforts led by those socially and fashionably aligned with her Fair Trade certified footwear company, Bethlehem Alemu, owner of Ethiopian brand Sole Rebels, has stores across the globe, including in Spain, Switzerland, Taiwan, Japan and the U.S. Absent social media, you could nevertheless take the approach of designer Duro Olowu by having the U.S. First Lady Michelle Obama wear your designs.

Africa is now home to more than 1.2 billion people.  It is estimated that nearly 67 percent of the population across the continent is aged below 30; in sub-Saharan Africa, estimates push this number above 70 percent approaching 75 percent by some aggressive predictors. The youth in Africa’s population today and tomorrow forecasts as a large (and educated) labor force that is growingly more media savvy than many of their Western counterparts. Fashion trends and ideas are not passing through continent via radio and television, as it did several years ago, rather trends (like news) is jumping borders via Facebook and Instragram.

The expanding youth population is also richer than their parents. Top global consultancy McKinsey & Company estimates $1.4 trillion consumer spending in Africa by 2020 with 128 million of African households with discretionary income in 2020. The statistics are highly attractive for local markets. But, as social media demonstrates, African fashion is an industry selling beyond its local markets. The industry accordingly is projected to reach $20 billion in 2020, particularly as designers push their brands into higher spending markets in Europe and America to complement their local sales.

The true upside is, at best, unknown. Short on investment to date, globally acclaimed designers confront challenges in production and distribution. Local production still requires an upgrade in infrastructure. But the arrival of Asia clothing manufactures – albeit on the lower end of quality – indicates an interest from both private and public actors, particularly government officials with industrial parks, to change the current situation. Distribution networks and capabilities will subsequently improve to meet the growing needs of producers.

Clothing exports from Africa is definitely a reality. Its future is tied to its ability to raise capital. Seeing it firsthand changes your outlook. If you cannot make it to Dakar and Lagos, you can pass through Paris, London or Tokyo. In other words, if you cannot go to the continent, it will surely be in a city near you soon.