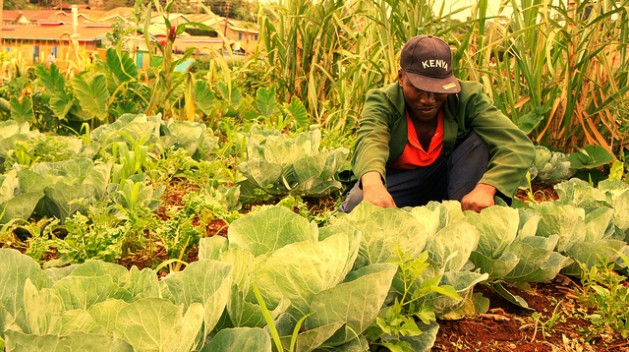 Vegetables grown in the lush soil of this quiet agricultural community in central Kenya’s fertile wetlands not only feed the farmers who tend the crops, but also make their way into the marketplaces of Nairobi, the country’s capital, some 150 km south.

Spinach, carrots, kale, cabbages, tomatoes, maize, legumes and tubers are plentiful here in the village of Ngangarithi, a landscape awash in green, intersected by clean, clear streams that local children play in.

“I am not fighting for myself but for my children. I am 85 years old, I have lived my life, but my great-grandchildren need a place to call home.” — Paul Njogu, a resident of the farming village of Ngangarithi in central Kenya

Ngangarithi, home to just over 25,000 people, is part of Nyeri County located in the Central Highlands, nestled between the eastern foothills of the Abadare mountain range and the western hillsides of Mount Kenya.

In the early 20th century, this region was the site of territorial clashes between the British imperial army and native Kikuyu warriors. Today, the colonial threat has been replaced by a different challenge: real estate developers.

Ramadhan Njoroge, a resident of Ngangarithi village, told IPS that his community’s worst fears came to life this past January, when several smallholder families “awoke to find markers demarcating land that we had neither sold nor had intentions to sell.”

The markers, in the form of concrete blocks, had been erected at intervals around communal farmland.

They were so sturdy that able-bodied young men in the village had to use machetes and hoes to dig them out, Njoroge explained.

It later transpired that a powerful real estate developer in Nyeri County had placed these markers on the perimeters of the land it intended to convert into commercial buildings.

The bold move suggested that the issue was not up for debate – but the villagers refused to budge. Instead, they took to the streets to demonstrate against what they perceived to be a grab of their ancestral land.

“We cannot have people coming here and driving us off our land,” another resident named Paul Njogu told IPS. “We will show others that they too can refuse to be shoved aside by powerful forces.”

“I was given this land by my grandmother some 20 years ago,” he added. “This is my ancestral home and it is also my source of livelihood – by growing crops, we are protecting our heritage, ensuring food security, and creating jobs.”

But Kenya’s real estate market, which has witnessed a massive boom in the last seven years, has proven that it is above such sentiments.

Those in the business are currently on a spree of identifying and acquiring whatever lands possible, by whatever means possible. It is a lucrative industry, with many winners.

The biggest losers, however, are people like Njoroge and Njogu, humble farmers who comprise the bulk of this country of 44 million people – according to the Ministry of Agriculture, an estimated five million out of about eight million Kenyan households depend directly on agriculture for their livelihoods.

Land: the most lucrative asset class

Last September, Kenya climbed the development ladder to join the ranks of lower-middle income countries, after a rebasing of its National Accounts, including its gross domestic product (GDP) and gross national income (GNI).

The World Bank praised the country for conducting the exercise, adding in a press release last year, “The size of the economy is 25 percent larger than previously thought, and Kenya is now the fifth largest economy in sub-Saharan Africa behind Nigeria, South Africa, Angola and Sudan.”

According to the Bank, “Economic growth during 2013 was revised upwards from 4.7 percent to 5.7 percent [and] gross domestic product (GDP) per capita changed overnight, literally, from 994 dollars to 1,256 dollars.”

The reassessment, conducted by the Kenyan National Bureau of Statistics, revealed that the real estate sector accounted for a considerable portion of increased national earnings, following closely on the heels of the agricultural sector (contributing 25.4 percent to the national economy) and the manufacturing sector (contributing 11.3 percent).

His analysis finds echo in a report by HassConsult and Stanlib Investments released in January this year, which found that the scramble for land in this East African nation is due to the fact that land has delivered the highest return of all asset classes in the last seven years, up 98 percent since 2007.

Land prices in the last four years have risen at twice the rate of cattle and four times the rate of property, while oil and gold prices have fallen over the same period, researches added.

Advertised land prices have risen 535 percent, from an average of 330,000 dollars per acre in 2007 to about 1.8 million dollars per acre today. Thus, equating land to gold in this country of 582,650 sq km is no exaggeration.

According to Owiro of the IEA, a growing demand for commercial enterprises and high-density housing in the capital and its surrounding suburban and rural areas is largely responsible for the price rise.

Government statistics indicate that though the resident population of Nairobi is two million, it swells during the workday to three million, as workers from neighbouring areas flood the capital.

This commuter workforce is a major driver of demand for additional housing, according to Njogu.

As a result, two distinct groups who see their fortunes and futures tied to the land seem destined to butt heads in ugly ways: real estate developers and small-scale farmers.

While the land rush and real estate boom fit Kenya’s newfound image as an economic success story, they run directly counter to the United Nations’ new set of Sustainable Development Goals (SDGs), due to be finalised in September.

The attempt to seize farmers’ land in Ngangarithi village reveals, in microcosm, the pitfalls of a development model that is based on valuing the profits of a few over the wellbeing of many.

Farmers who have lived here for generations not only grow enough food to sustain their families, they also feed the entire community, and comprise a vital link in the nation’s food supply chain.

Taking away their land, they say, will have far-reaching consequences: central Kenya is considered one of the country’s two breadbaskets – the other being the Rift Valley – largely for its ability to produce plentiful maize harvests.

In a country where 1.5 million people experience food insecurity every year, according to government statistics cited by the United States Agency for International Development (USAID), pushing farmers further to the margins by separating them from their land makes little economic sense.

Furthermore, encroachment by real estate developers into Kenya’s wetlands flies in the face of sustainable development, given that the U.N. Environment Programme (UNEP) has identified Kenya’s wetlands as ‘vital’ to its agriculture and tourism sectors, and has urged the country to protect these areas, rich in biodiversity, as part of its international conservation obligations.

For Njogu, the land rush also represents a threat to an ancient way of life.

He recounted how his grandmother would go out to work on these very farmlands, decades ago: “Even with her back bent, her head almost touching her knees, she did all this for us,” he explained.

“When she became too old to farm, she divided her land and gave it to us. What if she had sold it to outsiders? What would be the source of our livelihood? We would have nowhere to call home,” he added.

Already the impacts of real estate development are becoming plain: the difference between Ngangarithi village and the village directly opposite, separated only a by a road, has the villagers on edge.

“On our side you will see it is all green: spinach, kale, carrots, everything grows here,” Njogu said. “But the land overlooking ours is now a town.”

Various other villagers echoed these sentiments, articulating a vision of sustainability that the government does not seem to share. Some told IPS that the developers had attempted to cordon off a stream that the village relied on for fresh water, and that children played in every single day, “interacting with nature in its purest form,” as one farmer described.

“I am not fighting for myself but for my children,” Njogu clarified. “I am 85 years old, I have lived my life, but my great-grandchildren need a place to call home.”

Villagers’ determination to resist developers has caught the attention of experts closer to the policy-making nucleus in Nairobi, many of whom are adding their voices to a growing debate on the meaning of sustainability.

Wilfred Subbo, an expert on sustainable development and a lecturer at the University of Nairobi, told IPS that a strong GDP is not synonymous with sustainability.

“But a community being able to meet its needs of today, without compromising the ability of its children to meet their own needs tomorrow, [that] is sustainable development,” he asserted.

According to Subbo, when a community understands that they can “resist and set the development agenda, they are already in the ‘future’ – because they have shown us that there is an alternative way of doing business.”

“Land is a finite resource,” Subbo concluded. “We cannot turn all of it into skyscrapers.”