End of OPEC is closer to reality 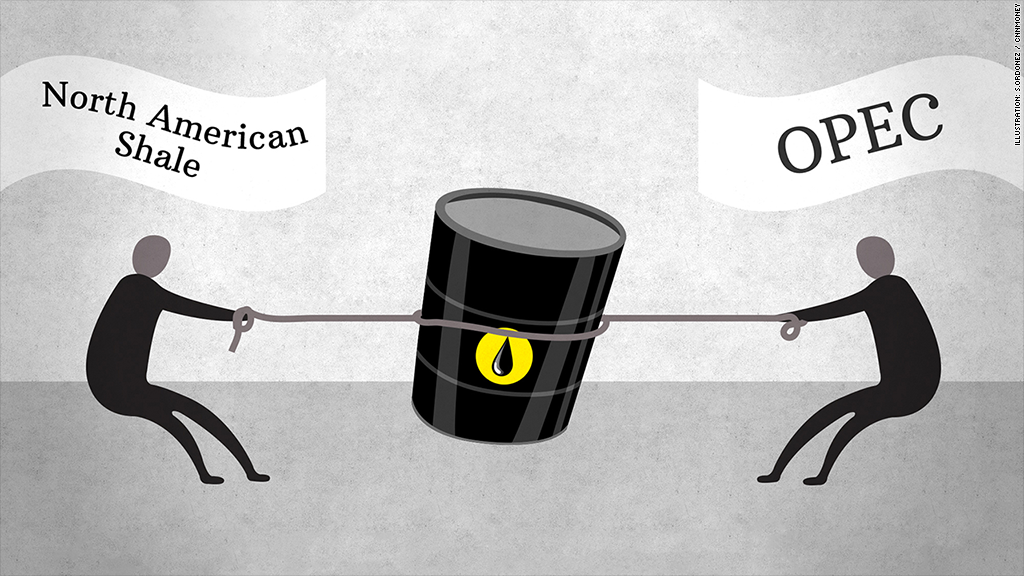 OPEC’s dominant role in the global oil market is in serious jeopardy.

For nearly half a century, the oil cartel kept a tight check on prices, keeping them from falling too low or rising to unsustainably-high levels.

But OPEC’s power is being challenged by the surge in North American oil production.

“The end of OPEC” might be closer to reality now, according to Edward Morse, global head of commodities research at Citigroup.

The shale revolution “has created a sort of existential threat to Saudi Arabia and OPEC,” he wrote in a report on Monday.

Founded in 1960, OPEC is led by some of the most influential oil-producing nations in the world, like Saudi Arabia, Qatar, Iran and UAE.

But now, the United States is the largest producer of oil in the world and Canada has been ramping up output as well.

That means not only has OPEC lost its biggest customer (America), but it no longer has the ability to manipulate prices to its own advantage.

Morse is no obscure analyst. He correctly predicted that oil prices were in bubble territory back in 2008 when crude surged to nearly $150 a barrel and Goldman Sachs was predicting a “superspike” to $200.

Shale as a disruptive force: The U.S. shale revolution has truly changed the game.

That much was clear in late November when OPEC changed strategies and decided not to put a floor beneath tumbling oil prices by cutting production.

OPEC decided it would rather maintain market share than keep prices high. That was code for squeezing high-cost producers like shale producers in the U.S. and the oil sands in Canada.

However, innovations have lowered the price that North American producers need to turn a profit. While the low oil prices resulting from the OPEC move is hurting shale and will lower U.S. output, domestic production is still expected to grow this year — just at a slower pace.

U.S. shale producers are also able to quickly react to price changes, revving up or slowing down production faster than traditional oil players.

Citi noted how conventional oil in OPEC and Russia is up only 5% since the start of the decade, compared with 40% in Canada and a whopping 75% in the U.S.

“Unconventional oil — particularly U.S. shale — has been the most disruptive geopolitical factor in markets since the 1970s,” Morse wrote.

The cartel’s influence has been waning for years, with the shale revolution speeding that up. It now accounts for about 40% of global oil production, down from around 60% in the 1970s.

These new supply realities have been playing out in the global oil markets. The price of oil has plummeted about 60% since June, touching levels unseen since 2009 during the Great Recession. Morse doesn’t believe a V-shaped recovery for oil is in the cards, saying a W-shaped one is more likely.

Now what? It’s not totally clear what a less influential OPEC would mean for oil prices.

That’s because in the past OPEC would step in to prevent oil price spikes from causing a dent in demand and producing an oil-driven economic recession in countries but also artificially boost prices during slower times.

It’s easy to see how the free market could play a much greater role in the future without OPEC putting its fingers on the scales.

“Each producer in the United States will do what’s best for his or her specific company, not what’s best for oil,” said Brenda Shaffer, a professor at Georgetown University who recently testified before Congress about energy security.