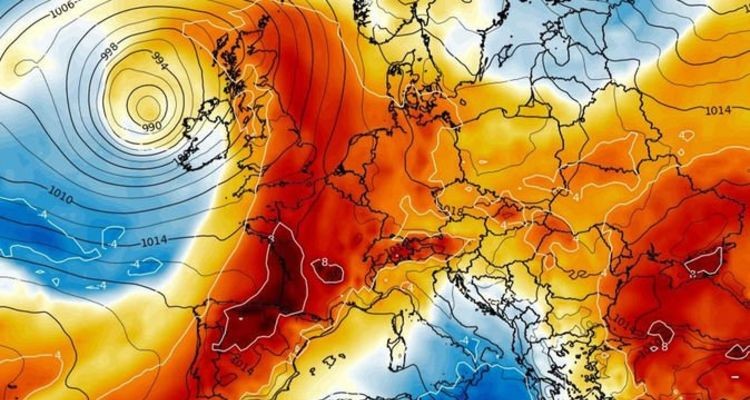 The European Union’s Copernicus Climate Change Service has reported that July 2019 “was the warmest month the world has experienced since record-keeping began more than a century ago,” according to the Washington Post.

The heat wave in Western Europe contributed to one of Greenland’s biggest-ice melting events ever. The country had a net mass ice loss of 217 billion US tons in July, according to the Associated Press, resulting in a rise in global sea levels by 0.5 mm.

These kind of heat waves are weather events and can occur naturally but studies have shown that both the frequency and intensity of these heat waves have increased due to global warming. When people talk about the average global temperature increasing by a little more than 1 degree (Celsius), that’s not a huge amount to notice if you’re sitting in Hamburg or London, but that’s a global average and it’s much greater in the polar regions.

This is not your grandfather’s summer … This year alone, we have seen temperature records shattered from New Delhi to Anchorage, from Paris to Santiago, from Adelaide and to the Arctic Circle. If we do not take action on climate change now, these extreme weather events are just the tip of the iceberg. And, indeed, the iceberg is also rapidly melting.

Drinks giant Diageo will spend $220 million (£180 million) on eco-initiatives at its sites in Kenya, Uganda, Nigeria, Tanzania, South Africa, the Seychelles, and Ghana, according to Just Drinks and Business Green.

It is Diageo’s “largest environmental investment in a decade.” They will install biomass boilers, solar, and water recovery, purification, and reuse facilities.

We have a responsibility as a local manufacturer and employer in Africa to grow our business sustainably — creating shared value — and this significant investment continues our work to pioneer sustainable solutions for our local supply chains.

The company employs 5,000 people in Africa.

How clean energy would benefit US labor unions

Democratic presidential candidate and Washington State governor Jay Inslee said on Saturday that “a clean energy economy could boost the fortunes of labor unions,” according to the Huffington Post. Inslee was one of 19 presidential candidates who spoke in Las Vegas at a forum hosted by the public-sector union AFSCME.

When asked to make the case to unions about the benefits of the Green New Deal, Inslee replied:

We know that one of the greatest opportunities for good, clean-energy union jobs is in the clean energy economy. We know that we have no choice but to develop a clean energy economy; the science is clear in this regard. And when we do that, we’ve got to make sure the jobs are here, not just in China; make sure that they’re good-paying union jobs, not low-paying jobs; and make sure that we do it in a timely fashion, not too late.

“The pitch is organic, the kits are bamboo, and the stands have solar panels on top” — meet the world’s greenest soccer team.

The Gloucestershire-based Forest Green Rovers’ chairman and owner, Dale Vince, set up the UK’s first renewable energy company, Ecotricity. He talked with the Independent about how he helped raise global awareness of the League Two team’s serious sustainability initiatives, and how the UN has asked the Rovers to lead the Sport for Climate Action initiative.

Refreshingly, Vince is optimistic about the future:

I would say 2050 is easily doable. Actually, I think in five years’ time, we could see that target coming down to 2040, which would still be achievable. But the super-important thing is that we now have this target because it’s an acknowledgement there’s a problem and that we have to get to grips with it.