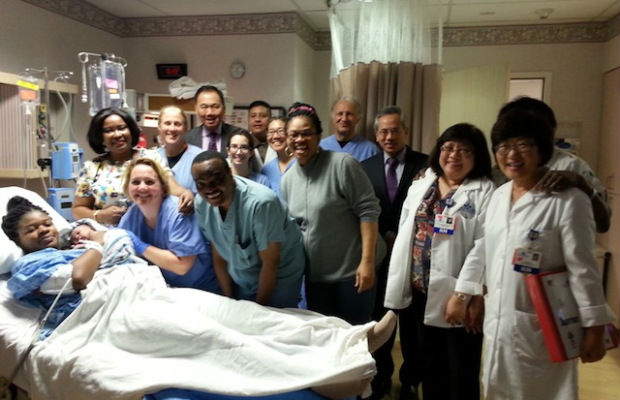 According to Expressng, the healthy baby girl, born at the Greater El-Monte Community Hospital, in California weighed 9 pounds and 1 ounce. The baby was certified Ebola free on delivery.

Following her battle with Ebola, “Dr. Igonoh has been placed under medical surveillance to ensure that her child is Ebola-Free,” Expressng reported.

The Nigerian doctor contracted the virus after caring for a Malaria patient at medical facility she worked, unbeknown to health workers that the patient had an Ebola strain.

Dr. Igonoh was on the team which cared for Nigeria’s first Ebola patient, Patrick Sawyer, a Liberian-American who arrived in Lagos sick and later died at the clinic in Obalende.

According to news reports, some of Dr. Igonoh’s colleagues at the health facility succumbed to Ebola, including one of the most senior doctors, Dr. Ameyo Adadevoh. Four people at the medical centre reportedly died from Ebola.

Last year, in a curious case, a baby born to an Ebola positive mother contracted the virus and survived a battle with the disease, in one of the few cases of survival in infants.

The birth of Dr. Igonoh’s baby has been greeted with happiness and celebration by staff and friends of First Consultants Medical Centre, according to Expressng.

In October last year, the World Health Organization declared Nigeria Ebola-Free, but the West African region is not out of the woods yet.

According to a WHO weekly update released last week, “Ebola cases in West Africa’s outbreak region stayed in the single digits last week, with four cases reported, all from a known transmission chain in Guinea”.

Source:  Arthur Chatora, This is Africa