Competitions for Writers: February and March 2015 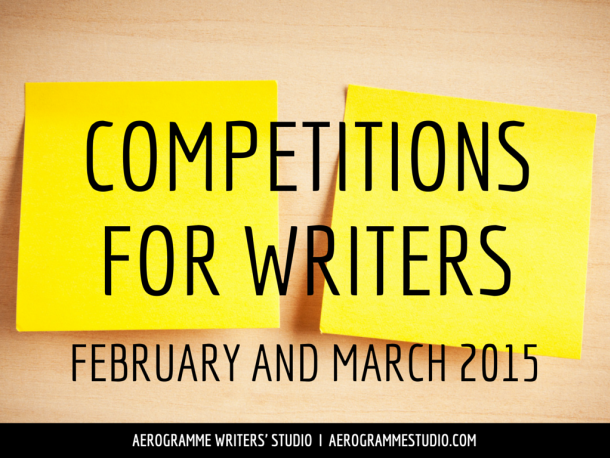 Competitions from around the world for both established and emerging writers.

Please check the relevant websites for all terms and conditions and be aware that entry fees are payable in many cases.

Homestart Bridgwater Short Story Prize
is being run in aid of an independent registered charity offering support to families facing difficulties The prize is open to stories up to 2200 words and will be judged by Tracy Chevalier, best known for the international best-seller Girl with a Pearl Earring. Entries close 1 February.

Malahat Review Long Poem Prize
is open to writers from all countries. Entries must consist of either single poem or cycle of poems between 10 to 20 pages long. Two prizes of CA$1000 will be awarded. Entries close 1 February.

Myriad’s First Drafts Competition
is open to all writers who have not yet published or self-published a collection of stories or a novel. Submissions should comprise a one-page synopsis and up to 5000 words of a work-in-progress (novel or short story collection). The prize is a week-long writing retreat at West Dean College near Chichester, detailed editorial feedback from industry experts plus six months’ mentoring from a Myriad author. Entries close 2 February.

Griffith University’s Josephine Ulrick Literature Prize
is one of Australia’s richest short stories prizes. First prize is AUD$10,000 and second prize is $5000. Stories may be up to 2000 words. Griffith University also offers a poetry prize with equal prize money. Entrants must be Australian citizens or residents and entries close 13 February.

Playboy Magazine’s Fiction Contest
is open to college students. Stories must be under 5000 words and previously unpublished. The winner receives US$3000 and publication. Entries close 13 February.

Kore Press Annual Short Fiction Award
is open to any female-identified individual writing in English, regardless of nationality. The award will be judged by Roxane Gay and entries must be between 4000 and 12,000 words. Entries close 14 February.

Writers’ & Artists’ Yearbook Short Story Competition
offers the winner a cash prize of £500, a place on an Arvon residential writing course of your choice and publication on www.writersandartists.co.uk. Stories must be under 2000 words and reflect the theme ‘joy’. Entrants can be from anywhere in the world and there is no entry fee. Close 15 February.

Swallows Sequential Short Story Award
is for complete black and white comic / cartoon stories from 1 – 5 pages long. Entries may be by sole authors, or collaborations between writers and artists. Entries close 15 February.

CDS Documentary Essay Prize
honours the best in documentary photography and writing in alternating years: one year, photos; one year, writing. This year’s competition is for writing. The winner will receive US$3000; have his or her work featured in Document, a periodical published by the Center for Documentary Studies, as well as on the Center’s website; and take part in CDS’s Documentary Writer Speaker Series. Entries close 15 February.

Lindquist & Vennum Prize for Poetry
is an annual regional prize, presented in partnership by Milkweed Editions and the Lindquist & Vennum Foundation.  The prize is open to poets from the United States’ Upper Midwestern region (defined as North Dakota, South Dakota, Minnesota, Iowa, and Wisconsin) and the winner will receive US$10,000 and a contract for publication. Entries close 15 February.

Dundee International Book Prize
is for an unpublished novel on any theme and in any genre and is open to writers worldwide. The winner will receive a £10,000 cash prize, together with a contract with Cargo Publishing. Shortlisted entries from the 2014 Award can be download as a free eBook.  Entries close 19 February.

BBC National Short Story Award
in partnership with Booktrust is now open for submissions for the ninth year. Published authors from the UK are invited to submit stories for the 2014 Award until 25 February.

Wag’s Review
runs two contests each year. The contests are open to all three genres and are judged by the editors. First prize is US$1000 and publication in the magazine, second prize is $500 and third $100. All pieces are considered for publication. Entries for the winter contest close on 28 February.

Glimmer Train Short Story Award for New Writers
is open only to writers whose fiction has not appeared, nor is scheduled to appear, in any print publication with a circulation over 5000. Most entries run from 1500 to 6000 words, but any lengths up to 12,000 words are welcome. The winner receives $1500 and publication. Entries close 28 February.

Sentinel Literary Quarterly Short Story Competition
is open to stories on any subject and in any style but must be under 1500 words. First prize is £200 and publication. Entries close 28 February.

Thiel Grant for Online Writing
supports inventive writing for the internet. Recipients of the $5000 award commit to producing 50 posts on an agreed concept over a 12-month period. Australian online writers of all genres are encouraged to apply. Closes 28 February.

Snowbound Poetry Chapbook Award
is offered by Tupelo Press and open to writers from around the word. Entrants should submit a previously unpublished, chapbook-length poetry manuscript (20-36 pages) with a table of contents. First prize is US$1000 and publication. Entries close 28 February.

Fiction Desk’s Ghost Story Competition
is open to all English-speaking writers aged 16 or over. First prize is £500, second prize is £250, and third prize is £100. Selected entries will also be published in a Fiction Desk anthology. Fiction Desk advises that ‘ghost story’ can mean a lot of different things, from an encounter with an actual phantom to more unusual paranormal phenomena and unexplained events. All types are welcome and writers are free to experiment: Entries close 28 February.

Kenyon Review Short Fiction Contest
is open to all writers who have not yet published a book of fiction. Submissions must be 1200 words or fewer. Ann Patchett celebrated author of six novels, including Bel Canto and State of Wonder, will be the final judge. Entries are accepted between 1 and 28 February.

Atlanta Review International Poetry Competition
awards a prize of US$1000 with a total of 20 entrants to be published in a contest issue of Atlanta Review. Entries close 1 March.

CBC Creative Nonfiction Competition
is open to all Canadian residents. The competition is for original, unpublished work of creative nonfiction between 1200 and 1500 words and carries a grand prize of CA$6000.

Bronwen Wallace Award for Emerging Writers
is open to Canadian writers aged under 35. Candidates should submit 5 – 10 pages (up to 2500 words) of previously unpublished fiction. First prize is CA$5000 and there is no entry fee. Entries close 2 March.

Molly Keane Creative Writing Award
is inviting entries from Irish writers with a previously of unpublished short story to a maximum of 2000 words. There is no entry fee, no age limit and no restriction on the subject matter. Entries close 6 March.

Room Creative Nonfiction Contest
is open to until 8 March. Room is Canada’s oldest literary journal by and about women. The winner receives CA$500 and publication.

Nelligan Prize for Short Fiction
is offered each year by Colorado State University’s Center for Literary Publishing. The winner receives a US$2000 honorarium and the story is published in the fall/winter issue of Colorado Review. There are no theme restrictions, but stories must be under 50 pages. Entries close 14 March.

Prairie Schooner Book Prize Series
welcomes manuscripts from all living writers, including non-US citizens, writing in English. Winners will receive $3000 and publication through the University of Nebraska Press.The editors prefer that fiction manuscripts be at least 150 pages long and poetry manuscripts at least 50 pages long. Novels are not considered; manuscripts should be comprised either entirely of short stories or one novella along with short stories. Entries close 15 March.

Tobias Wolff Award for Fiction
offers a prize of US$1000 and the winner and many runners-up will be published in the Spring 2016 print edition of Bellingham Review. Entries close 15 March.

Annie Dillard Award For Creative Nonfiction
offers a prize of US$1000 and the winner and many runners-up will be published in the Spring 2016 print edition of Bellingham Review. Entries close 15 March.

Willow Springs Fiction Prize
awards a first prize of $2000 and publication. There is a $15 entry fee for which every entrants receives a subscription to Willow Springs. Closes 15 March.

Mslexia Women’s Short Story Competition
is open to stories up to 2200 words in length and can be on any subject. The winner receives £2000 plus two optional extras: a week’s writing retreat at Tŷ Newydd Writers’ Centre and a day with a Virago editor. Women writers from all countries are eligible to enter. Closes 16 March.

Crime Writers’ Association (UK) Margery Allingham Short Story Competition
is open to all writers around the world. They encourage entries from both published and unpublished writers. Stories must be no longer than 3500 words and the winner will receive £1,000. Entries close 16 March.

SA Writers’ College Annual Short Story Award
is open to emerging writers in South Africa who have had fewer than four stories/articles published in any format (print or digital). First prize is R 10 000.00 and entries may be up to 2000 words in length. Closes 31 March.

Narrative Magazine Winter Story Contest
is open to short stories, essays, memoirs, photo essays, graphic stories, all forms of literary nonfiction, and excerpts from longer works of both fiction and nonfiction. Entries must be previously unpublished and no longer than 15,000 words. First prize is US$2500. The contest closes on 31 March.

Bath Novel Award
is an international competition for unpublished or self-published novels with a £1000 prize. Submissions should include up to the first five thousand words of a novel plus a one page synopsis. Entries close 31 March.

Scottish Arts Club Short Story Competition
offers a first prize of £800. The competition is open to all writers over 16 the chairman of the judging panel is Alexander McCall Smith. Stories should be under 1500 words and can be on any topic. Closes 31 March.

Caterpillar’s Inaugral Poetry Competition
is for a single poem written by an adult for children (aged 7–11). The competition is open to all and there is no line limit. The winner receives €1000 and publication. Entries close 31 March.

CutBank Chapbook Contest
offers the winner publication, US$1000 and 25 copies of the finished book. Manuscripts should be 25-40 pages in length of poetry (a cohesive poetry manuscript), fiction (either a short fiction collection or novella), or creative nonfiction (one long essay or a short collection of essays). Entries close 31 March.

Text Prize for Young Adult and Children’s Writing
is for unpublished manuscripts by writers from Australia and New Zealand. The winner receives AUD$10,000 and a publishing contract with Text Publishing. Entries open on 2 March and close 2 April.