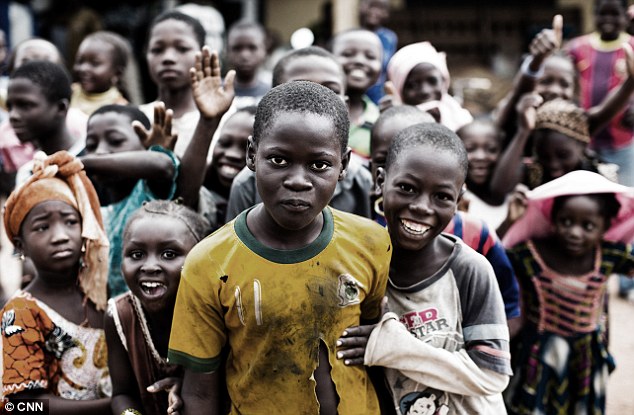 Mike Sheil traveled to West Africa to photograph the lives of children trafficked as slaves and forced into marriage.

He was sent by Anti-Slavery International, a British charity, to Benin, where children are sold into slavery, and Gabon, where many of them end up.

Benin is one of the poorest countries in the world and people are just desperate. They very often do not have enough to feed their family. If someone offers to take their child away I think it’s almost a relief.

The traffickers are very often known to the people, to the families. They’re either friends or other members of the family who take the children away saying that they’re going to have a good life in this other place. And, of course, it seldom lives up to that.

The children are taken overland to Nigeria. They’re gathered together and put onto boats — wooden, open boats, probably about 100 to 150 children on each boat. If you can imagine a 6-year-old child who’s never even seen the sea before, it must be absolute hell. They’re landed at night close to Libreville, the Gabonese capital, and then they are distributed to their various employers.

Generally speaking, the children are employed in the house, washing floors, cleaning, maybe preparing food when they get a bit older, things like that. Or they may well be made to go out and sell goods on the street.

The one trafficker I was able to speak to had herself been trafficked as a child, so I think she just regarded it as a normal part of life. When she was working as a trafficker, she was trading about three or four children a month and getting about $30 (U.S.) for each child. It may not sound like much, but in that society it’s a lot of money.

There are two men in Libreville who are trying to rescue these girls and get them repatriated to their country. Without any resources and without any real campaign to go and attract these girls, in the last year they have repatriated more than 80 children.

They are currently looking after 16 in their house in Libreville. Every child they get costs them effectively $250 (U.S.) to repatriate. You can work out for yourself that they need a lot of money just to get these girls back home. And they haven’t got it.

This girl is Murimata. Murimata is 15 and she is now HIV positive. In the picture she’s eight months pregnant. She has now had the baby boy. But that girl is going to die. She was brought overland to a place called Ebono. Whilst she was there the boatman used to come along each night and take out the elder girls and rape them. So she has suffered from multiple rape. So her life is ended, basically.

This girl’s name is Aminata. She was totally traumatized, in a really dreadful state. The photograph was taken 24 hours after she was found. She was sitting under a tree sobbing her heart out. The reason she was crying is that she had stolen some biscuits from the kitchen and she was scared that someone was going to come along and take the biscuits away and beat her. It’s bestial, to see children reduced to that state of abject terror. It’s quite horrifying.

These are two sisters. They are absolutely lovely little girls. They had been trafficked. They had been in Gabon for about five months. What happened was that the elder sister got very upset when her younger sister was actually tied up and beaten and she was out, sent out for something, and she saw a policeman and she went and told him about the problem. And the policeman, full credit to him, took her to the embassy and they then went and rescued her sister.

What I said to them was, “What’s was the worst thing that happened to you?” And she said, “I was tied up and they beat me.” So it was not me suggesting that those children were beaten. That was the child volunteering that she had been beaten. So I have no doubt at all that someone took a 6-year-old-child and tied her and beat her.

There needs to be an awareness in the rest of the world that this is a major problem and in the 21st century it’s an absolute disgrace. It really is, this is a filthy business. Assistance needs to be given to the people who are trying to rescue these children and get them back to their homes. That is a matter of absolute priority.