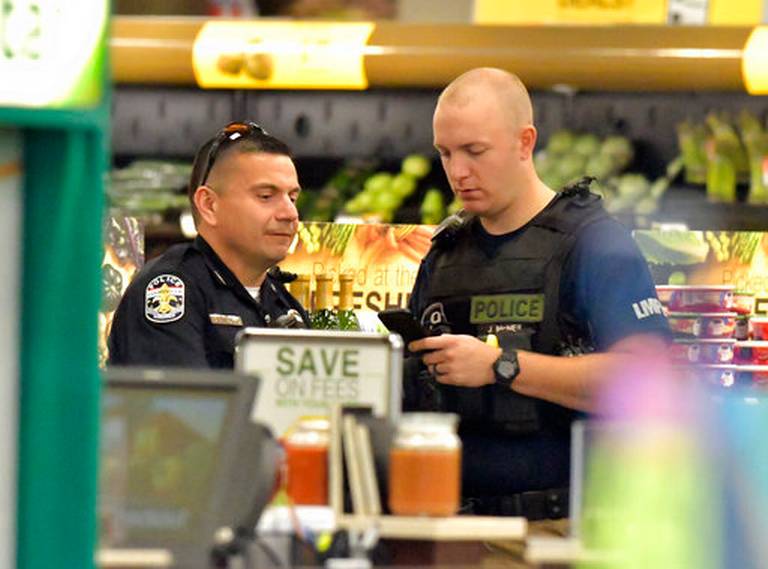 People of color have to be careful and alert these days in the United States of America and not take anything for granted during these interesting times no matter how safe you think your neighborhood is.

JEFFERSONTOWN, Ky.
A white man with a history of violence fatally shot two African-American customers at a Kroger grocery store and was swiftly arrested as he tried to flee, police said Thursday. Authorities said it was too soon to say what prompted the shooting.
News outlets have reported that the suspect made a racial comment to a man he encountered on his way out of the store after the shooting Wednesday. But when asked if the attack may have been racially motivated, Jeffersontown Police Chief Sam Rogers responded, “I can’t speculate on motive at this time. … We are pursuing all avenues of the investigation no matter where that takes us or what it involves.”
At a news conference Thursday, Rogers did say surveillance video shows the suspect tried unsuccessfully to enter the First Baptist church in Jeffersontown before he went to the Kroger. The church is headed by a black pastor and has a large African-American membership.
The FBI announced that it “is evaluating the evidence to determine if there were any violations of federal law.”
Rogers also said the suspect, 51-year-old Gregory Alan Bush, apparently does have a history of mental illness as news outlets have reported.
An arrest report says Bush walked into the store outside Louisville, pulled a gun from his waist and shot a man in the back of the head, then kept shooting him multiple times “as he was down on the floor.” The report says Bush then reholstered his gun, walked outside and killed a woman in the parking lot.
A man carrying a concealed weapon who happened to be in the parking lot challenged Bush, and police say the suspect then “began firing wildly” at him, putting other shoppers in the parking lot in danger. Neither man was hurt in that confrontation, Rogers said.
Bystander video shows a white man in a distinctive neon-yellow shirt trying to drive away while an officer chases after him on foot. Many more officers converged on the scene and made the arrest just a few hundred yards (meters) from the store on Wednesday afternoon.
Bush, 51, was jailed on $5 million bond Thursday on two counts of murder and 10 counts of felony wanton endangerment.
Ed Harrell was quoted by the Courier Journal of Louisville as saying he was waiting on his wife in the parking lot when he heard gunshots and grabbed his revolver. As he crouched down, he said he saw the gunman walk “nonchalantly” by with a gun by his side. Harrell said he called out to ask what was going on, and the gunman replied: “Don’t shoot me. I won’t shoot you. Whites don’t shoot whites.”
At Thursday’s news conference, Rogers said police “are aware of that statement and are evaluating any factors that may come into play with” it.
Rogers added that he had “no direct knowledge” of whether there was more than one armed bystander at the scene.
The local coroner’s office identified the victims as Maurice Stallard, 69, and Vicki Lee Jones, 67. Police said there didn’t appear to be any connection between Bush and the victims, or any link between Bush and the Kroger store.
Stallard’s 12-year-old grandson was shopping with him in the store when he was gunned down, Jeffersontown Mayor Bill Dieruf said Thursday. The boy was physically unharmed, but most certainly traumatized, the mayor said, adding, “He was there and cannot unsee what he has seen.”
Stallard is father of Kellie Watson, the chief racial equity officer for Louisville Mayor Greg Fischer.
The mayor shared his outrage Thursday over what he called an “epidemic of gun violence” that “hit close to home.”
“People getting shot at a grocery store, a school, outside a church. Can’t we all agree that that is unacceptable?” Fischer, a Democrat running for re-election, said at a news conference.
Police executed a search warrant on Bush’s home, where he lived with his parents. They removed computers and cellphones from the house.
Bush’s criminal record shows he threatened his ex-wife and punched a deputy sheriff during a family court hearing years ago. He also was charged with assaulting his elderly parents in January 2009.
An arrest citation said Bush’s parents were punched and choked, and they told police they were “terrified of (his) unpredictable behavior.”