Back to School, Though Not Back to Normal, in a Liberia Still Fearful of Ebola 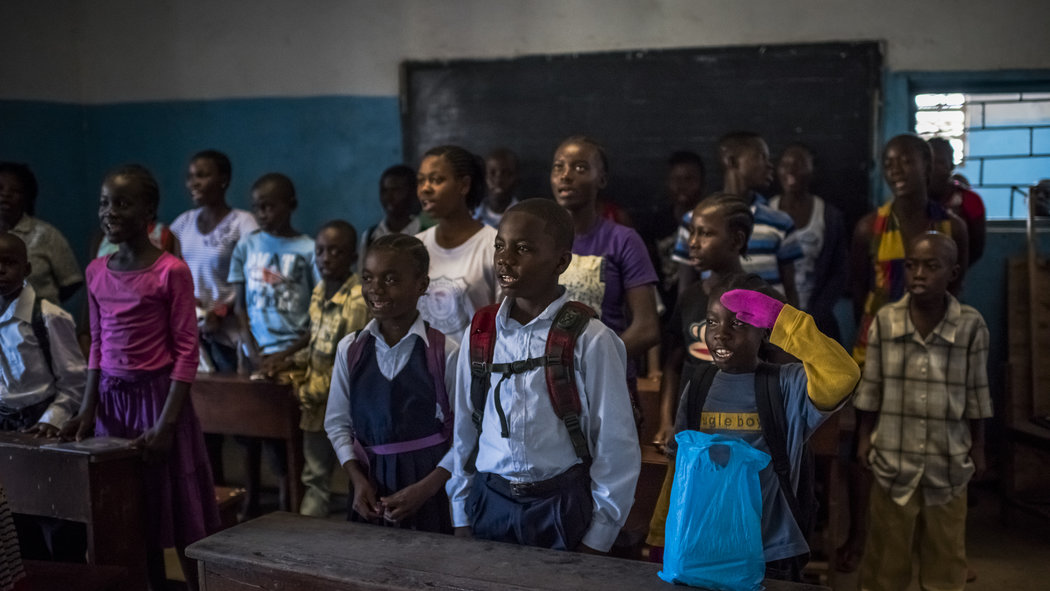 MONROVIA, Liberia — A couple of dozen students sat quietly inside the C.D.B. King Elementary School’s dim and dusty auditorium on their first morning back. Despite the stuffy heat, many of the children wore long sleeves and trousers that covered as much skin as possible.

A second grader wore pink knit mittens that muffled the sound of his clapping when the teachers introduced themselves. As everyone rose to sing Liberia’s national anthem, he saluted with his left hand, still sheathed in the mitten.

About eight months after governments in the region closed schools to stop the spread of Ebola, uniformed and backpack-carrying schoolchildren have returned to the streets of Monrovia, the capital, perhaps the most visible sign of the epidemic’s ebb.

But Liberia’s on-again, off-again back-to-school campaign is also a measure of the long shadow cast by Ebola, a disease that affected almost every facet of society in the hardest-hit countries, Liberia, Sierra Leone and Guinea.

Though Ebola cases have all but disappeared in Liberia, with the Health Ministry saying Wednesday that the last patient in treatment had tested negative for the virus, lingering fear and a depressed economy have dampened the turnout at schools. Many have yet to reopen, having failed to meet the minimum requirements put in place to prevent transmission of the virus.

Many of those that have reopened are struggling. Just as Liberia’s weak health care system collapsed as Ebola began raging across the country, many people here worry that the nation’s schools may be ill equipped to handle even the tail end of the epidemic.

C.D.B. King, despite being in the center of the capital, lacks electricity and running water, and has only a few toilet stalls for a student population that numbered 1,000 before the outbreak.

Now, the school is trying to overcome those longstanding problems — and the ravages of a disease that has killed more than 9,600 people in the region.

Fanning herself with a sheet of paper, Ms. Crayton, the vice principal, rattled off a list of don’ts: Don’t play rough. Don’t exchange pencils. Don’t share food. Don’t spit. Don’t urinate in the courtyard. Don’t hide illness in the family.

“If you want to live,” she told the students, “don’t lie about Ebola.”

By the end of the first day of class, only about 30 students had showed up.

“People are still afraid, so they are careful with their kids,” said Augustus Seongbae, the principal. “Many of them are watching what happens to the kids who come first.”

Fierce disagreement over whether to resume classes forced the government to change the original start date of Feb. 2 several times before finally deciding to reopen schools on a rolling basis starting on Feb. 16. The government said that with Ebola waning, many children were already playing in their communities, and that potential teaching time in the classroom was being frittered away.

But some lawmakers, education officials and parents argued that children should not go back to school until Liberia is declared free of Ebola, or 42 days after the last case of the disease — which experts say could be months away.

Tolbert Nyenswah, the Liberian deputy health minister in charge of the Ebola response, said Wednesday that there had been no new confirmed cases of the disease in the country for 12 days, but that officials were still tracking 102 people for possible exposure to the virus.

Even as Ebola wanes, the country and its schools are facing countless other challenges. Maryland County, in eastern Liberia, is suffering from an outbreak of whooping cough, affecting about 200 children, according to the Centers for Disease Control and Prevention, just as schools are set to reopen there.

Many parents have complained that because of Ebola’s chilling effect on the economy, they needed more time to gather the resources to send their children to school.

Miatta Fahnbulleh, the mother of the boy with the pink mittens, James Nyema, 9, used to send him to a private school. But because she had been unemployed for months from her job as a kindergarten teacher, she had chosen to send him to C.D.B. King, a public school. Public schools are free, though parents must pay for uniforms and other supplies.

She walked her son, known as J.C. because his middle name is Christian, to school in the morning with a blue plastic bag containing his lunch and a water bottle.

“I told him when he was going, ‘Don’t deal with anybody, don’t drink anybody’s water, don’t touch anybody,’ ” she said, laughing, as she came to pick up her son after lunch.

She had dressed him in trousers and long sleeves, which he usually wore only during the rainy season — not now, the driest and hottest time of the year. She had bought the mittens at a nearby market, where they had become available during the height of the epidemic last year.

“What can I do?” she said, laughing again.

Liberia’s 14-year civil war, which ended in 2003, destroyed schools and left a generation that is less educated than older ones.

“Prominent people came from our school, ministers and government officials,” said Thomas Deshield, a teacher at C.D.B. King, which is named after a former president and is one of the oldest public schools in the capital.

Since the end of the war, Liberia has focused on expanding access to education; 1.2 million Liberians were in school before Ebola, out of a population of 4.3 million. But C.D.B. King and many other public schools suffer from a scarcity of resources and crumbling infrastructure. Public schoolteachers are often poorly trained and unmotivated.

“We realize that it’s been good to get a lot of people in,” said Albert Coleman, the Ministry of Education official overseeing the reopening of schools. “But if we must develop and move forward as a country, our emphasis should be more on quality and a little bit less on access.”

Most Liberians prefer enrolling their children in private schools, which account for more than a third of the nation’s 4,460 educational facilities. But with many private schools now reporting a drop in enrollment because parents are unable to afford them, many parents are expected to register their children at already strained public schools in the weeks and months ahead.

At C.D.B. King, Ms. Crayton arrived at 6:30 a.m. on the second day of class to try to make the school safe against Ebola. No one at the school had received any direct training, so she consulted an instruction pamphlet she had received along with materials from international donors — infrared thermometers, buckets, chlorine, rubber boots and gloves, brushes and soap.

She chased away local petty traders who had stored their goods overnight in the schoolyard. “This is a government school,” she told one woman, who scampered away with her wares on her head.