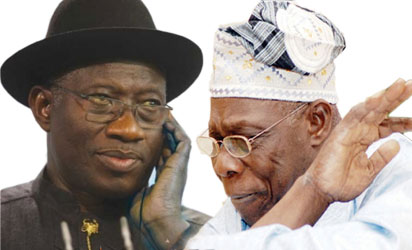 Many, who spoke were unanimous in accusing Obasanjo of laying the foundation that led to the current dire state of the economy. They, however, did not spare Jonathan for allegedly encouraging profligacy in the present dispensation.

Obasanjo is after President’s downfall

In his remarks, Babatope said: “Obasanjo has raised no issue and I have no doubt that this attack on President Jonathan is part of his plans to make Nigerians reject Jonathan ahead of the February 2015 election.

“There is nothing Obasanjo will say to change the minds of Nigerians towards voting for President Jonathan during the February elections. Obasanjo is an experienced man in government and he should not be the one making such statements.”

“The President has himself to blame for what is happening because he is the leader of the country. It has shown how the oil revenue is being managed. We all knew about the existence of excess crude account. The state of the economy confirmed that the were all busy sharing the oil revenue without proper planning for the rainy day.

“Nigeria is the only country where people gather to share money monthly without making concrete plans for wealth creation. I believe the former President is responsible for our problems. He said he assisted the man in becoming the President. Since he has described the man as a failure, he is also a failure. Since he is making us believe that the president is failure, it also means that he made the wrong decision.

“There are other channels of communicating with the President rather this. However, I don’t think there is any secret in all Obasanjo said because they had all been in the public domain.

“My comment does not have anything to do with whether the President is re-elected or not. My focus is on the implications of the development on the polity.

“The question now, should be on how to get the economy work. Whoever emerges the President would have to make to critical decisions on how to handle the situation. He would either borrow to run finance governance or devalues the currency. But it is going to be tough for whoever that is elected president because these are not the best of times.”

Odumakin said: “It is the media that has been giving Obasanjo undue relevance. You are not helping this country by giving him that kind of attention. He is a man who spent all his years in government encouraging corruption.

“During his administration, N560 billion was not remitted into the federation account and people are not asking questions. Nigerians must continue to hold their leaders accountable and they must continue to ask questions but with due respect, Obasanjo is turning himself into a public nuisance. He should spare us.

“It is very clear to Nigerians that Obasanjo wants this country to be in a crisis so that they will call on him again to come and save the country. That is what he is playing out.”

In his submission, Opadokun said: “I will not want to throw the baby away with the bath water just as I do not want to pontificate over the genuineness of ex-President Obasanjo but I believe strongly that he has spoken the minds of every Nigerian.

“I am not saying that Obasanjo is the best man to make such statements but these allegations are evident that Jonathan’s administration is a failure when it comes to corruption compared to other past administrations.

“Ex-President Ibrahim Babangida administration whom many of us labelled the most corrupt government has come out to say he should be regarded a saint, a situation that has further confirmed that corruption has been institutionalised by the Jonathan administration.

“The Jonathan-led administration has been making a fool of Nigerians and one begins to wonder what kind of society we are living in. But without mincing words, what Obasanjo has said in that regard is very accurate and it further confirmed that the Jonathan administration has failed.”