African Trade Could Take A Serious Hit If The U.S. Abandons Its Trade Pact With The Continent 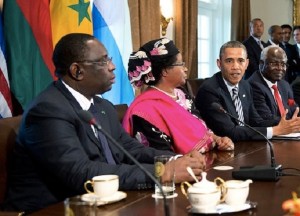 Arguably, one of the factors responsible for Africa’s improved trading over the past decade has been the Africa Growth and Opportunity Act (AGOA), a piece of legislation that was approved by the U.S Congress in May 2000. It was granted to assist the economies of sub-Saharan Africa grow economic relations with the world’s greatest economy.

The act facilitates duty-free entry into the U.S for certain goods, and the result had been an expanded access mostly for textile and apparel goods and a surge in foreign exchange earnings. It was initially set to expire in 2008 but, again, the U.S Congress extended the Act till 2015.

Last year, at the U.S-Africa Leaders’ Summit, a number of African heads of state pushed for the pact to be extended by a further 15 years and suggested that the range of products covered by the act be expanded to include agricultural products. The rationale for this is clear; U.S bound exports from sub-Saharan Africa under the AGOA totalled about $26.8 billion in 2013 alone according to Reuters. This fulfils the exact reason the act was enacted in the first place.

Lesotho and Kenya can be said to be the biggest beneficiaries of the deal as their economies have been diversified and strengthened largely as a result of the trading opportunities created by the act. Nigeria, the continent’s biggest economy, has also seen trade flows blossom to $18 billion since the act enactment.

South African President Jacob Zuma, at the summit, emphasized the need for another extension, saying; “Almost 95 percent of South African exports receive preferential treatment under AGOA. We strongly believe that by endorsing the extension of AGOA, the U.S. will be promoting African integration, industrialization and infrastructure development – I’m sure the Americans would not want to lose this opportunity.”

Diverse criticisms have emerged over the years from elements in the United States. Their main argument being that a further extension could damage America’s interests in the long run.

Dr Carlos Lopes, Executive Secretary of the UN Economic Commission for Africa, explains the points-of-view of the critics in a 2013 article, in which he wrote; “The Act’s opponents argue that Africa’s impressive growth in the 21st century means the continent no longer needs special treatment. They also claim that it is China and other countries who have been investing in Africa which have been the main beneficiaries from the removal of restrictions and that, in some cases, they are simply re-exporting their own products through African countries.”

“Evidence, however, shows that while African countries have certainly gained, as intended, the most from AGOA, the benefits have not by any means been all one-way. In the first decade since it came into force, US exports to sub-Saharan Africa tripled to $21 billion. As the US commerce department estimates that 5,000 American jobs are created or sustained for every $1 billion worth of exports, this trade is helping support over 100,000 jobs in the US. The US trade department has also insisted that proper safeguards are in place to prevent abuse of the rules,” he added.

This is a win-win for both regions, making the case for further extension all the more necessary. Apparel and footwear companies continue to champion the largest support as several hundred thousand jobs were created via AGOA. But, with the uncertainty surrounding the renewal of AGOA, further investments will be likely stall and the already created jobs may be in jeopardy.

If the extension succeeds, it will benefit both regions. American exports and jobs will increase as African countries develop their economies in new sectors. This will bolster the US’s global influence eve more.

The European Union, keen to escape its present economic uncertainties has already set up an Economic Partnership Agreement with 35 African countries. This is essentially a framework for free trade agreements. If this materializes and the AGOA fails to scale, the United States may remain at a permanent competitive disadvantage with respect to Africa, which happens to be the new investment frontier for global businesses.

In the run up to current AGOA expiry date of September 30, the world will be watching to see how the US treats its growing ally.