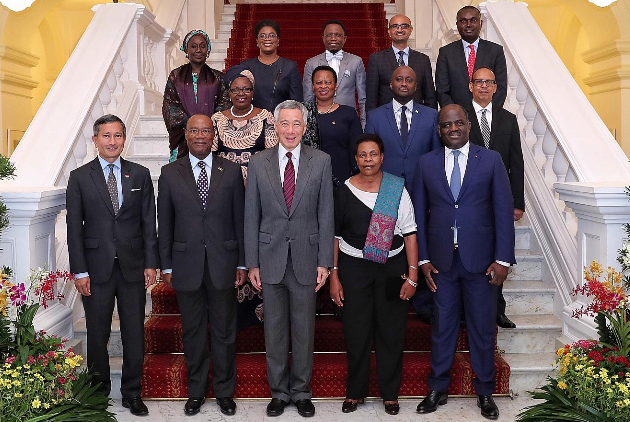 Minister for Trade and Industry Chan Chun Sing yesterday called on African businesses to make Singapore a base and a partner “in South-east Asia and beyond”, adding that aviation agreements to boost physical connectivity would be practical for enabling business links.

Even as some developed economies pull back from the world stage, Africa and South-east Asia can work together more closely and promote economic integration, Mr Chan said in a keynote address at the biennial Africa Singapore Business Forum.

“While the economies of Africa and South-east Asia continue to work towards openness and integration, we also see other countries retreating from globalisation because of their domestic difficulties,” said Mr Chan. “We hear of tariffs, trade tensions between major players and protectionism on a regular basis. We are already seeing the real effects of such actions and rhetoric on the commercial decisions of many companies.

“Against this backdrop, it is important that we continue to believe in, and promote and support, economic integration and cooperation, with a strong conviction that open economies, connected economies, inter-dependent economies, ultimately bring better jobs and better income for our people,” Mr Chan told the 600 delegates at the forum.

Noting that the third Singapore-Sub-Saharan Africa High-Level Ministerial Exchange Visit was under way this week under the auspices of the Ministry of Foreign Affairs, Mr Chan said it was “essential for our governments to continue forging partnerships and create conducive environments to support business-to-business interactions”.

Ethiopian Airlines and Air Mauritius are the only two African airlines flying to Singapore, and “we hope and encourage to see more African carriers do the same in future”, he added.

At yesterday’s forum, an agreement on the avoidance of double taxation was inked between Singapore and Gabon – the 13th such deal with an African country.

Five other pacts were signed at the event held at the Grand Copthorne Waterfront Hotel, and organised by government agency, Enterprise Singapore.

The agency’s Singapore Cooperation Enterprise arm and the Mozambique Investment and Export Promotion Agency have agreed to work on exchanging consultancy, advisory and training services for urban master plans and special economic and industrial zones, while the Singapore Manufacturing Federation and Egyptian Businessmen Association will work to match companies in each country with their counterparts.

Digital solutions company Graymatics struck a deal to partner Crescentech, a Kenyan infocomm technology firm, in areas such as security, banking, telecommunications and retail, with an eye to expanding into South Africa, Nigeria and other countries on the continent.

GeTS Asia – a subsidiary of government e-solutions company CrimsonLogic, which is 30 per cent-owned by Enterprise Singapore and 70 per cent-owned by Temasek Holdings’ PSA International – will bring its recently launched Open Trade Blockchain platform to Kenya, in a deal with the Kenya Trade Network Agency.

Such agreements should result in more partnerships between Singapore and African companies, said Enterprise Singapore chief executive Png Cheong Boon, who cited “tremendous opportunities in Africa, particularly in the area of consumer products, manufacturing, digital economy and infrastructure development” in his opening remarks at the forum.

Enterprise Singapore said it has successfully facilitated close to 50 projects for Singapore companies in Africa in the last two years, 80 per cent of which were undertaken by small and medium enterprises.

More than 60 Singapore companies are present in Africa, operating across more than 40 countries and multiple industries.