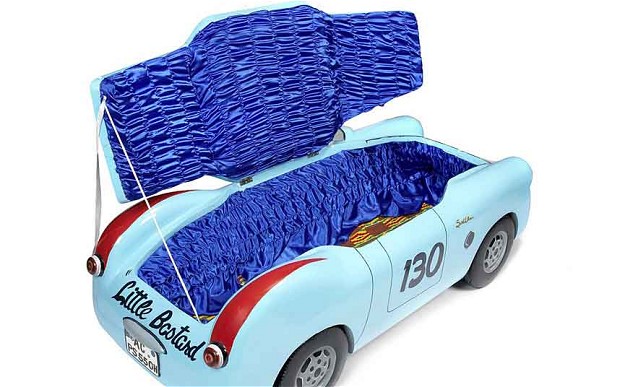 Could buying African art be a good investment – or is it simply a market for the art lover who wants something nice to hang on his or her wall?

There is a compelling argument that African art might experience a boost similar to pieces of Chinese origin, where newly affluent Asian professionals are driving up prices (see below).

Yet at the entry level there are still bargains around. This month, London auctioneers Bonhams is holding its Africa Now sale, an annual event since 2009. Estimates for pieces go from £3,000 to £100,000 and prices have been rising in recent years.

Giles Peppiatt, director of contemporary African Art at the auctioneers, said that at last year’s sale seven wooden sculptures by Nigerian artist Ben Enwonwu, which were commissioned by the Daily Mirror in 1961, sold for £361,250: only a few years ago, similar works would have fetched in the region of £100,000. The record price ever paid for a piece of art by a contemporary African artist was £541,250 in 2012 for New World Map by Ghanaian artist El Anatsui.

Increased interest from African buyers has come with economic growth in Sub-Saharan Africa.

“Given the rapid economic growth in the continent I see no reason why contemporary African art should not continue to attract greater interest, and therefore increase in price,” Mr Peppiatt said.

Much of the top contemporary African art comes from Nigeria and, to a lesser extent, Ghana. One of Mr Peppiatt’s tips for future stardom is Paa Joe, a Ghanaian artist who makes highly decorated coffins. His piece Porsche 55 is expected to fetch £4,000‑£6,000.

The most sought-after contemporary African artists attract the attention of museums and private collections, boosting prices. But Mr Peppiatt said some works in the sale would be bought for a few thousand pounds. However, he added that African art was still a “frontier” market. In other words, there are no guarantees your piece will increase in value.

“You should never buy art for investment reasons,” he said. “Buy a piece of art because you love it, not in the hope of making money on it.”

British buyers are at an advantage compared with those in France and Belgium, where contemporary and antique African art prices have already soared. This is partly due to different colonial histories. France colonised West Africa; Belgium, central Africa. British colonies were mainly in the east and south, where the contemporary art scene is less developed – and where historically there was less of a tradition of tribal art, masks and figures.

African tribal antiques can command huge prices, but you can still pick up pieces for a few hundred pounds. Again, British buyers have an advantage as African tribal art is more popular and expensive in France and Belgium. Indeed, many great French artists, including Matisse and Cezanne, were inspired by tribal art, said Bryan Reeves, who runs the west London gallery Tribal Gathering (tribalgatheringlondon.com) and is taking part in the Tribal Art show (tribalartlondon.com) from September 10 to 13 at the Mall Galleries in London.

Many of the masks and carvings were brought to Europe by colonists. Now pieces from those original collections are coming to the market, Mr Reeves said, as the original owners’ descendants sell their inherited pieces. A piece known as Baga Serpent on sale in Sotheby’s New York in 2008 was expected to fetch a low six-figure sum but sold for $3.6m (£2.1m at current rates) – a record at the time for African art.

Mayfair gallery owner Michael Backman (michaelbackmanltd.com) said: “The main market for top-end pieces is in Paris, which is where record auction results for tribal art tend to be achieved. Top-quality items that might have sold for £20,000 a decade ago can sell for millions now.”

However, while the top end of the African art market has risen markedly, prices in the middle to lower range have remained fairly flat. “Prices have not gone down but by and large have not risen so steadily either,” Mr Backman said. “This is an area where a person with a good eye can enter the market without spending a fortune.”

He has pieces on sale for £350 or less, including a tribal hat for £280. Masks for sale include a Lukwakongo Lega mask from the eastern part of the Democratic Republic of Congo for £950.

Most of Mr Reeves’s buyers are European, but he sees increased interest from Africans wishing to buy pieces from their history. “You can buy good pieces for £500-£1,000 but prices for top pieces can be £10,000 or more,” he said. The most popular pieces are masks and figures with pieces from the Fang tribe of Gabon, the Luba from Congo and the Dogon of Mali particularly sought after.

“They are wonderful pieces of great beauty,” Mr Reeves added. “Some can sell for £100,000 or more – 15 years ago they were going for a fraction of that.” Mr Backman said Yoruba pieces were “terribly undervalued”, as the Nigeria diaspora is widespread and becoming increasingly wealthy. “Eventually they will want to collect their own cultural artefacts,” he said.

However, Mr Backman warned that tribal art was “the most faked area” of art. “An item must scream age and ritual use,” he said. “If it doesn’t then it is not worth having from a collector’s point of view. Probably 95pc of all tribal art in circulation is fake and of no interest to the serious collector or museum. Items with superb, deep patina and provenance and which are beautiful are valuable. Almost everything else isn’t.”

Research will help you avoid fakes. Museums such as the Horniman in London have large collections so it is worth gauging what authentic pieces look like. Usage is not necessarily a good indicator; once the pieces were acquired by Europeans they became curios, so were not used for their intended purpose. British dealers who have acquired from European sources can show a piece’s history and confirm its authenticity.

The price of traditional Chinese works of art rose by 163pc between 2005 and 2013, according to the Coutts Index.

This was far more than Western art managed, which art dealers put down to the increasing number of wealthy Chinese. In 2004 only 4pc of participants in Sotheby’s Asian auctions were mainland Chinese; by 2011 the number had risen to 50pc.

As an example of rising prices, in Sotheby’s Hong Kong sale in autumn 2013, The Last Supper by Zeng Fanzhi sold for $23.1m – a record price for contemporary Asian art. The piece had been bought by a Swiss collector in 2001 for just $20,000.

Many of the most sought-after African artists come from Nigeria – as do their buyers. Only last year the Nigerian art market rose by 21.8pc. While the political and religious turmoil in Nigeria cannot be ignored, the continent’s most populous country is also now its biggest economy. Nigeria is Africa’s largest oil producer and is benefiting from high prices on the world’s market, creating a class of potential art collectors.