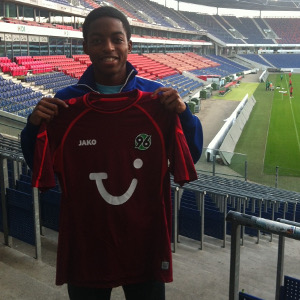 USA youth international, Abuchi Obinwa took a big leap in his career when he has signed for Bundesliga side, Hannover 96 yesterday, January 29, 2015.

Obinwa signed his first professional contract as he recently turned 18 years old on the 15th of January, 2015. He joins a growing list of US nationals plying their trade in major European Leagues.

“Since I was 3 years old I have been fighting for one dream, from missing school, to moving from my family and friends, and even not going to church, all just to sign this piece of paper. ”

“No matter where I am, I’m always grateful to the people who believed in me, but I couldn’t have gotten here without the man above .

“I’m so blessed to say I have finally signed my first professional contract for Hannover 96. ”

Abuchi Obinwa has represented the United States of America at U15, U16, U17 and U18 and was formerly on the books of Chicago Magic PSG, an affiliate Club of Paris St. German.

In 2013, he won an opportunity to train with Real Madrid youth structures and spent a week in Madrid, perhaps they will keep an eye on him.

Abuchi is also still eligible for Nigeria through his Parents, Nnanna and Stella Obinwa but this move will boost his chances of progressing to the senior US national team and will delight German Coach, Jurgen Klinsmann who will definately keep an eye on his progress.

The versatile 1.81m or 6 feet, 2 inches tall defensive Midfeilder and sometimes Centre-back was born on January 15, 1997 in Columbus, Ohio in the United states of America and his older Brother, Nathaniel Obinwa plays American Football for Colgate university.