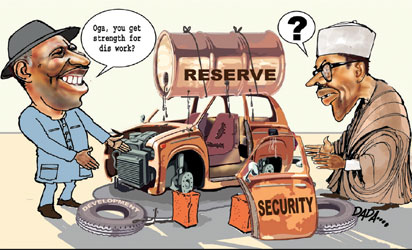 FOR the first time in 16 years, May 29 would elicit more emotions than celebrations of a new government, rather another government, assuming office. May 29 is laced with trepidations about what the new government would do. The fears are mainly among those who have run the affairs of Nigeria since the 1999 season of civil administrations.

The immediacy of the fears has been located in indications that the eyes of the government may not wonder beyond a few years in the prosecution of its anti-corruption agenda. The befuddlement over the age of Nigeria’s corruption and the interesting analyses to save a select few from the blows, if they ever come, are another interesting side to the inauguration of the presidency of Muhammadu Buhari. Whatever he does would be a new aspect of our governments; how he does it may bear more importance.

If history was made on May 29, 1999 with the return to civil rule, barely a year in the life of the Gen Abdulsalami Abubakar administration, today is simply historic. For the first in our history, an opposition party won the election at the centre.

Nigeria has managed 16 years of uninterrupted civil administration: two and half times the six-year duration of the post-independence civilian administration, and three times longer than the 1979-post military government of President Shehu Usman Aliyu Shagari.

The quadrennial routine of swearing in governments also reminds politicians that their time has started “running”. Many of them understand this to mean that they should immediately commence plans for their re-election in 2019 and decide who succeeds them in 2023.

Section 14 2(b) of the Constitution, to which the President, Vice President, Governors and Deputy Governors would swear to today, should be at the centre of the contract between Nigerians and their governments.

Our governments have assumed the authoritarian ways of the military. The separation of powers the Constitution intended is a mirage. Local government administrations, the third tier of government, are dead. In most States, Governors are imperial. They are Executive Governors, a title alien to the Constitution. When they embark on their frequent travels, governance waits until they return. They are accountable to nobody as the State Houses of Assembly are compliant.

Today could mark the beginning of governments where the people count.