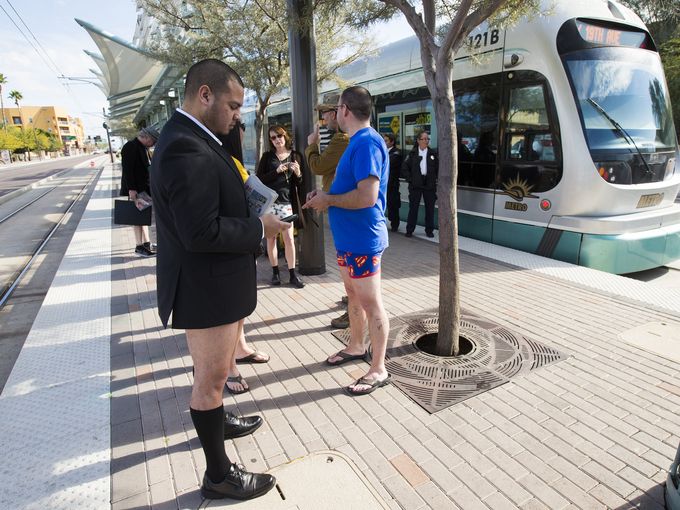 These are the bare facts: Sunday was No Pants Day on Valley Metro Light Rail trains.

It was a seat-of-the-pants-less affair. For the seventh year in a row, an estimated 400 to 500 men, women and even children shed their pants and braved the ride in their undies, their tights, their chonis.

“It shakes people,” said Heather Herr, one of the event organizers.

And apparently hundreds of light-rail riders agreed with her.

The No Pants Light Rail Ride in Phoenix is organized by Improv AZ, a branch of the New York-based prank group, Improv Everywhere, and it is synchronized with no-pants rides in more than 60 cities around the world.

“I like things that challenge people’s preconceptions,” said Jeff Moriarty, one of the event organizers. “That doesn’t happen a lot in this town.”

Though the event has become quite popular — last year they had about 600 participants — Moriarty said the group still tries to keep it a surprise.

Some unsuspecting riders were shocked.

One light rail customer who wasn’t participating in the event said he felt like he was “dead smack in the eye of the tornado.”

“It was shocking, but fun,” said Tom Morales, who confessed he used to have an underwear fetish. “It was visually exciting.”

Riders exited the train at Roosevelt Street and Central Avenue for a mid-ride gathering for food and drinks at Angels Trumpet Ale House.

This is the third year the restaurant has hosted the organization’s after party, and no, employees didn’t warn the restaurant’s regulars that a horde of pants-less customers were coming in for some brewskis.

Some diners looked shocked, but owner Sharry Englehorn said she’s never had a customer complain. In fact, she said, they’ve even had some customers join in on the fun.

“Most people get a good chuckle out of it,” Herr said. “There’s a lot of great underwear to look at.”

Herr said participants are asked to act as normal as possible and if questioned to say they forgot their pants.

“We don’t want to make it too obvious that it’s a prank,” she said.

The event is part of the No Pants Subway Ride, an international event that started in New York City in 2002. This year more than 60 cities in 25 countries are participating.

Moriarty said the event is an “instant bonding experience.”

“Ninety percent of these people don’t know each other,” he said. “Taking off your pants creates an instant friendship.”