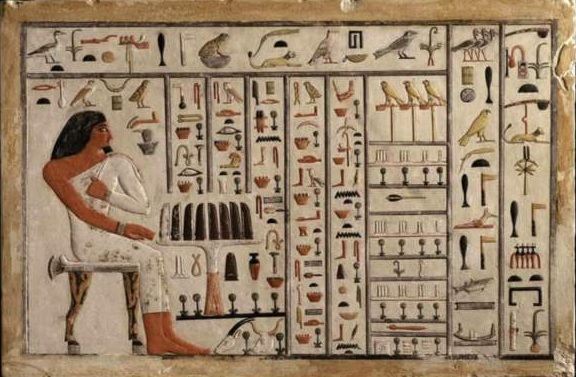 The first words by humans were spoken by Africans.

”Using statistical methods to estimate the time required to achieve the current spread and diversity in modern languages today, Johanna Nichols — a linguist at the University of California, Berkeley — argues that vocal language must have arisen in our species at least 100,000 years ago. Using phonemic diversity, a more recent analysis offers directly linguistic support for a similar date. Estimates of this kind are independently supported by genetic, archaeological, palaeontological and much other evidence suggesting that language probably emerged somewhere in sub-Saharan Africa during the Middle Stone Age, roughly contemporaneous with the speciation of Homo sapiens.”

In 1999, Archaeology Magazine reported that the earliest Egyptian hieroglyphs date back to 3400 BCE which “…challenge the commonly held belief that early logographs, pictographic symbols representing a specific place, object, or quantity, first evolved into more complex phonetic symbols in Mesopotamia.”

Who were these original Egyptians?

The Greek historian Herodotus.. described the Colchians of the Black Sea shores as “Egyptians by race” and pointed out they had “black skins and kinky hair.”

Apollodorus, the Greek philosopher, described Egypt as “the country of the black-footed ones” and the Latin historian Ammianus Marcellinus said “the men of Egypt are mostly brown or black with a skinny desiccated look.”

In his book ‘Egypt’, British scholar Sir E.A. Wallis Budge says: “The prehistoric native of Egypt, both in the old and in the new Stone Ages, was African and there is every reason for saying that the earliest settlers came from the South.” He further states: “There are many things in the manners and customs and religions of the historic Egyptians that suggests that the original home of their prehistoric ancestors was in a country in the neighborhood of Uganda and Punt [present day Somalia].”

”Greek historian Diodorus Siculus devoted an entire chapter of his world history, the Bibliotheke Historica, or Library of History (Book 3), to the Kushites [“Aithiopians”] of Meroe. Here he repeats the story of their great piety, their high favor with the gods, and adds the fascinating legend that they were.. the founders of Egyptian civilization, invented writing, and had given the Egyptians their religion and culture.”

“Ancient Egypt was a Negro civilisation. The history of Black Africa will remain suspended in the air and cannot be written correctly until African historians connect it with the history of Egypt. The African historian who evades the problem of Egypt is neither modest nor objective nor unruffled. He is ignorant, cowardly and neurotic. The ancient Egyptians were Negroes. The moral fruit of their civilisation is to be counted among the assets of the Black world.”

”The earliest known surgery was performed in Egypt around 2750 BC…. The Ebers papyrus (1550 BC) is full of incantations and foul applications meant to turn away disease-causing demons, and also includes 877 prescriptions. It may also contain the earliest documented awareness of tumors..

Homer (800 BC) remarked in the Odyssey: “In Egypt, the men are more skilled in medicine than any of human kind” and “the Egyptians were skilled in medicine more than any other art”. The Greek historian Herodotus visited Egypt around 440 BC and wrote extensively of his observations of their medicinal practices. Pliny the Elder also wrote favourably of them in historical review. Hippocrates (the “father of medicine”

, Herophilos, Erasistratus and later Galen studied at the temple of Amenhotep, and acknowledged the contribution of ancient Egyptian medicine to Greek medicine.

The African empire of Egypt developed a vast array of diverse structures and great architectural monuments along the Nile, among the largest and most famous of which are the Great Pyramid of Giza and the Great Sphinx of Giza

The pyramids, which were built in the Fourth Dynasty, testify to the power of the pharaonic religion and state. They were built to serve both as grave sites and also as a way to make their names last forever. The size and simple design show the high skill level of Egyptian design and engineering on a large scale. The Great Pyramid of Giza, which was probably completed c. 2580 BC, is the oldest and largest of the pyramids, and is the only surviving monument of the Seven Wonders of the Ancient World. The pyramid of Khafre is believed to have been completed around 2532 BC, at the end of Khafre’s reign.

The invention of mathematics is placed firmly in African PRE-HISTORY

”The oldest known possibly mathematical object is the Lebombo bone, discovered in the Lebombo mountains of Swaziland and dated to approximately 35,000 BC. It consists of 29 distinct notches cut into a baboon’s fibula. Also prehistoric artifacts discovered in Africa and France, dated between 35,000 and 20,000 years old [respectively], suggest early attempts to quantify time.

The Ishango bone, found near the headwaters of the Nile river (northeastern Congo), may be as much as 20,000 years old and consists of a series of tally marks carved in three columns running the length of the bone. Common interpretations are that the Ishango bone shows either the earliest known demonstration of sequences of prime numbers or a six month lunar calendar.

”Numeral systems have been many and diverse, with the first known written numerals created by Egyptians in Middle Kingdom texts such as the Rhind Mathematical Papyrus.

The earliest uses of mathematics were in trading, land measurement, painting and weaving patterns and the recording of time. More complex mathematics did not appear until around 3000 BC, when the Egyptians and Babylonians began using arithmetic, algebra and geometry for taxation and other financial calculations, for building and construction, and for astronomy”

The oldest known mine on archaeological record is the “Lion Cave” in Swaziland, which radiocarbon dating shows to be about 43,000 years old. Much later on, the Africans of Egypt mined malachite….Quarries for turquoise and copper were also found at “Wadi Hamamat, Tura, Aswan and various other Nubian sites”..The gold mines of Nubia were among the largest and most extensive in the world, and are described by the Greek author Diodorus Siculus. He mentions that fire-setting was one method used to break down the hard rock holding the gold. One of the complexes is shown in one of earliest known maps. They crushed the ore and ground it to a fine powder before washing the powder for the gold dust.

Iron smelting is a form of extractive metallurgy; its main use is to produce a metal from its ore. This includes production of silver, iron, copper and other base metals from their ores. Smelting uses heat and a chemical reducing agent to decompose the ore, driving off other elements as gasses or slag and leaving just the metal behind.

”Where and how iron smelting was discovered is widely debated, and remains uncertain due to the significant lack of production finds.. [but] there is a further possibility of iron smelting and working in West Africa by 1200 BC. In addition, very early instances of carbon steel were found to be in production around 2000 years before the present in northwest Tanzania, based on complex preheating principles. These discoveries are significant for the history of metallurgy.”

Greek historian Diodorus Siculus. From his own statements we learn that he traveled in Egypt around 60 BC. His travels in Egypt probably took him as far south as the first Cataract.He wrote about the ”Ethiopians” south of Egypt.

“They further write that it was among them that people were first taught to honor the gods and offer sacrifices and arrange processions and festivals and perform other things by which people honor the divine. For this reason their piety is famous among all men, and the sacrifices among the Aithiopians are believed to be particularly pleasing to the divinity,”

Stephanus of Byzantium, who is said to represent the opinions of the most ancient Greeks, says:

“Ethiopia was the first established country on the earth, and the Ethiopians were the first who introduced the worship of the Gods and who established laws.”
Quoted by John D. Baldwin, Prehistoric Nations, p. 62.

In 1825, Arnold Hermann Heeren (1760-1842), Professor of History and Politics in the University of Gottengen and one of the ablest of the early exponents of the economic interpretation of history, published, in the fourth and revised edition of his great work Ideen Uber Die Politik, Den Verkehr Und Den Handel Der Vornehmsten Volker Der Alten Weld, a lengthy essay on the history, culture, and commerce of the ancient Ethiopians, which had profound influence on contemporary writers in the conclusion that it was among these ancient Black people of Africa and Asia that international trade was first developed. He thinks that as a by-product of these international contacts there was an exchange of ideas and cultural practices that laid the foundations of the earliest civilizations of the ancient world. Heeren in his researches says: “From the remotest times to the present, the Ethiopians [ancient name for blacks south of the Sahara] have been one of the most celebrated, and yet the most mysterious of nations. In the earliest traditions of nearly all the..civilized nations of antiquity, the name of this distant people is found. The annals of the Egyptian priests are full of them, and the nations of inner Asia, on the Euphrates and Tigris, have interwoven the fictions of the Ethiopians with their traditions of the wars and conquests of their heroes; and, at a period equally remote, they glimmer in Greek mythology. When the Greeks scarcely knew Italy and Sicily by name, the Ethiopians were celebrated in the verses of their poets, and when the faint gleam of tradition and fable gives way to the clear light of history, the lustre of the Ethiopians is not diminished.”

Philosophy is the study of general and fundamental problems, such as those connected with reality, existence, knowledge, values, reason, mind, and language. Philosophy is distinguished from other ways of addressing such problems by its critical, generally systematic approach and its reliance on rational argument.

Philosophy in Africa has a rich and varied history, dating from pre-dynastic Egypt, continuing through the birth of Christianity and Islam. Arguably central to the ancients was the conception of “ma’at”, which roughly translated refers to “justice”, “truth”, or simply “that which is right”. One of the earliest works of political philosophy was the Maxims of Ptah-Hotep, which were taught to Egyptian schoolboys for centuries…Ancient Egyptian philosophers made extremely important contributions to Hellenistic philosophy, Christian philosophy, and Islamic philosophy.

”Ancient Egyptian philosophy has been credited by the ancient Greeks as being the beginning of philosophy”.

The oldest art objects in the world—a series of tiny, drilled snail shells about 75,000 years old—were discovered in a South African cave.