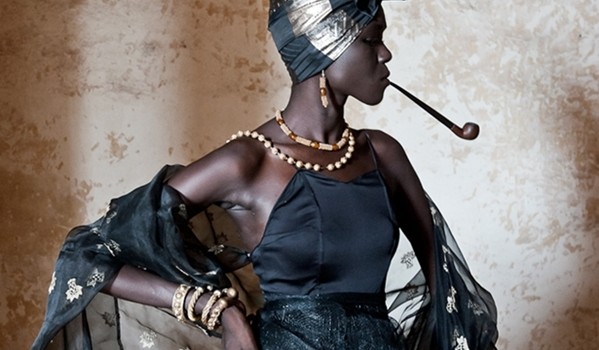 He began by painting flowers. After studying abroad in South Africa, Chiurai became politically aware and has said his most subversive act was picking up a paintbrush. He gained respect for his dramatic mixed media and multimedia compositions depicting critical socio-political issues of the region. Chiurai was forced into exile for a charged portrayal of dictator Robert Mugabe in his pieces “Rau Rau” and the “Battle for Zimbabwe.” His unique use of digital photography, editing, printing, painting, and, more recently, film serve his mission to do “something important” with his art. His work is collected by Elton John, and is in the permanent collection of MoMa, New York. He’s had many international solo and group exhibits.

He said, “F*k original. Be genuine.” This talented multimedia performance artist nudges us out of our comfort zone toward mindful reflection through music, videos, the spoken word and a capella performances in galleries and on stage. Like his name might suggest, his works give us a nasty, often vicious sting right in our sense of self,  jolting our awareness into a depth beyond our limited stereotypes. Past exhibitions include, “9 Artists” at the Walker Art Centre in Minneapolis in 2013, and “Across the Board: Politics of Representation” at the Tate Modern in London in 2012. He has numerous exhibits including in the 29th São Paulo Biennial, Brazil, 2010. He lives and works in Luanda, Lisbon and Ghent.

A new and emerging talent on the African art scene, Alatise’s body-contoured, colorful fabrics serve to clothe invisible human archetypes. Her figures, such as the defiant, winged woman, represent no limitations and stand as testimony to the female form, whose power is invisible to the eye. In her “Wrapture” series, Alatise’s work is a medley of folds, knots, and draped cloth dramatizing our clothed identities. A Yoruban, she infuses poetic humor into her figures’ gestures, engaging a philosophical language that seeks to redeem the “female folk.” She lives and works in Lagos and has a growing number of exhibits to her name.

Born in Durban, Rose is known for her provocative multimedia performances that incorporate video and photography. An ardent feminist — and once a boxing aficionado — she is adept at fusing complex social issues with pop effervescence to depict identity. She uses body type, race and gender to evoke a visceral statement on disparities between them and their politicization in the social landscape. She has had solo and group exhibits worldwide and participated in the Venice Biennale among others. She lives in Johannesburg.

Recipient of this year’s U.S. State Department National Medal of Arts, this artist renders large-format paintings and prints.She draws from elements of architecture, using city aerial maps to apply layer upon layers of acrylic to depict the density of the world’s metropolises. Mehretu uses mixed media to create complexity. She has exhibited in MoMa, Walker Art Center, Guggenheim in New York and Berlin, as well as many other notable institutions and biennales. Mehretu was born in Addis Ababa and lives and works in New York.

In 1997, Gaba inaugurated his monumental signature piece in the Rijksmuseum in Amsterdam. It consists of 12 exhibition halls that depict his life fused to his art with names such as, “The Money Room,” and “The Marriage Room.” His work includes decommissioned bank notes and personal memorabilia. The interactive Museum of Contemporary African Art traveled through Europe showcasing and calling attention to African art. The Tate Modern in 2013 purchased and exhibited the entire nomadic museum for its private collection. Gaba has exhibited worldwide including at the Sao Paolo and Venice biennales. He lives in Rotterdam.

An A-list would not be complete without Sokari Douglas Camp. A pioneer for women sculptors in Africa, she represents the first generation of artists having success in the international market. She relies on modern techniques but finds inspiration from traditional masks and costumes used for rituals in her homeland. Born and raised in Kalabari town in the Niger Delta, she draws from Kalabari culture and customs. She has lived in London and addresses pertinent global issues in her work, using predominantly steel. Douglas Camp has had numerous solo and group shows all over the world. Permanent collections of her work can be found in the Smithsonian Institute in Washington, D.C. and London’s British Museum.

Born in Sekondi-Takorad, Ghana, Owusu incorporates Adinkra symbolism in his work to address the concepts of identity and body. His symbols trace beyond spirituality, stimulating philosophical and sociopolitical discourse, insisting on an intercultural intercourse in our contemporary society. He is considered a stellar artist of his generation, dabbling in the delicate balance between personal and collective consciousness. He lives in Bern, Germany.

Samba wa Mbimba N’zingo Nuni Masi Ndo Mbasi was a founding member of the Popular Painting School, focusing on everyday life in his country and the African continent. He places himself as a central figure in his work to be a spokesman of sorts. He would sign his work “Popular Painter.” He began as a sign painter and comic strip artist, influences that are noted in his work today. He narrates a story with bursts of color and word bubbles to provoke dialogue and attention. He also illustrated magazines until his breakthrough in 1989 with his exhibition, “Les Magiciens de la Terre,” (Magicians of the World) at the Centre Georges Pompidou in Paris. He has exhibited and is in permanent collections worldwide, including the MoMa; the Venice Biennale, Venice, and the Tate Modern, London.

It’s difficult to describe the labor-intensive, stunning installations this prominent contemporary artist creates with mixed media. He uses mostly repurposed, readily available materials. He studied at the National Art Institute of Bamako and in Cuba, turning, in the 1990s from the easel to painstaking work involving collecting, classifying, dying, cutting, sewing and embroidering objects. He makes monumental shimmering constructs that often seem to have an organic life of their own. Like most, if not all African artists, Konaté conveys the socio-economic-political-ecological life of the region, fusing ancient cultural traditions and contemporary manifestations. He has exhibited worldwide including the Centre Pompidou and Musée National d´Art Moderne, Paris; Museum Kunstpalast, Dusseldorf; Sao Paulo Biennale, Brazil and many others. Born in Diré, he lives and works in Bamako and is director of its Conservatoire for Arts & Media.

Born to a Belgian mother and Beninese father in Dakar, Monteiro studied industrial engineering and later worked as a model. In 2007 he met his mentor in New York City and embarked on an exceptional adventure as artist, photojournalist, fashion and portrait photographer. He has constructed a visual universe within his images that captures the rich beauty of the African face and soul, against the backdrop of apocalyptic landscapes. His work has been featured in news stories and fashion spreads. It’s in the permanent collection of the Seattle Art Museum in the U.S., the Paris Hotel Rive Gauche, France and TOTAL foundation in Dakar, Senegal. Keep your eye on him.

El Salahi is considered the grandfather of African modernism. In the 1970s he was a diplomat. As undersecretary of the Sudanese Ministry of Culture, he became a political prisoner charged with anti-government actions. His paintings are a dance between Islamic, African, Arab and heavy Western influences. His work is said to evoke Picasso’s primitive period with dichromatic and bold lines, or Mondrian’s Electric Boogie, but always infusing his own vocabulary as a self-professed “picture maker.” He was given a Tate Modern retrospective in 2013 titled a “Visionary Modernist.” He has exhibited and is collected worldwide. His studio is in Oxford, England.