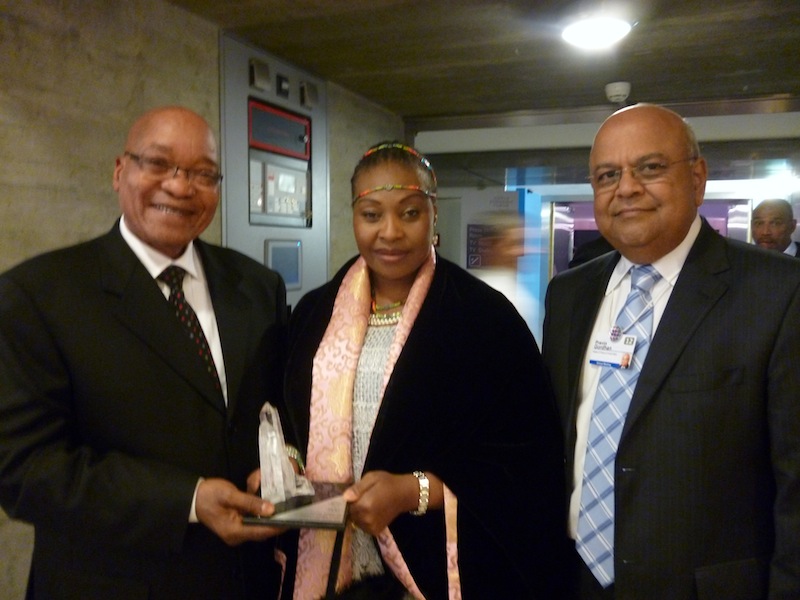 loves singing. In her hand, she held music and took it round the orbit of fame.  Yielded to the call of stardom; she never got locked up in the unpleasantness that folded the untapped talents of many African women who have given it all to fate and circumstances.  In fact, she never settled for the ordinary. Despite her tight spot that seems like the closeness of horrific night on her marrow, her determination and firmness towards achieving her dream carried her too well. Today, she lives her life and earns it as not just a singer but music icon and Goodwill Ambassador.

Yvonne Machaka, famously called Chaka Chaka, ventured into music as a teenager. Perhaps back then she never envisioned that she would one day be celebrated globally for her music and passion. With her recent World Economic Forum Crystal Award by World Economic Forum, in Davos, Swizerland, Yvonne has stepped herself into a new tour of legacy.

Besides, being the first African woman to receive the award, the journey that took her from grass to her present grace can be traced as far back as four decades ago in South West Town in South Africa.

Eleven years after she was born in 1965 in Dobsonville, Soweto, Chaka Chaka lost her father who was also a musician.  She grew up under the care of her mother, Sophie Machaka, together with her two sisters.  Her mother, who lived on 40 rand ($5) monthly from a local teaching work, inscribed on Chaka Chaka’s mind that no single pin acquired in life will go into the grave with anyone after death.

As a young girl, during the days when apartheid was hard on South Africans, Chaka Chaka nursed her dream. Despite the colour discrimination that existed then, her perseverance took her through her studies at the University of South Africa with two distinguish diplomas in both local government, management and administration, and adult literacy.

Chaka Chaka became the first Black child to be seen as a unique figure on South African television, after appearing on a talent show called ‘Sugar Shack’ in 1981, which was the foundation of her skyscraper.

Chaka Chaka was an active member of her church choir. Her unique voice soon became too “strong” to be ignored by talent hunters. Phill Hollis of Dephon Records took her up at age 19 in 1985, from the choir-stand to the soundproof studio experience. She was ushered into the South African music scene immediately her debut album, “I’m in love with a DJ,” was released. It has about 35, 000 record sales.

This soon followed with albums like Motherland, Who is the Bose, Burning up, Sangoma, Thank you Mr. DJ, Power of Africa, Be proud to be African, Who’s got the power, Kwenzenjani and lot of others. Her popular song, Umqombothi, gave the award winning Hotel Rwanda (a movie that captured the genocide history of Rwanda) a tone of sad realism.  Besides seeing the captivating scenes in the movie, hearing the voice of Chaka Chaka made a difference.

Over the years, she has used her music judiciously to fight many causes across African Continent. As a songwriter, conscious of social disorders, Chaka Chaka ensures that her compositions interpret the silences of sufferings that vary from diseases, sickness and poverty. She is inspired by things happening around her and in the process inspiring others around her.

Yvonne Chaka Chaka has shared the stage with other popular stars like the sensational Beyonce, Miriam Makeba, Johnny Clegg, Bono, Annie Lennox, Angelique kidjo and some others.  She believes in the power of song, which has brought her before prominent personalities across the world, including the Queen of England, the former president of the United State, Bill Clinton and the great Mandela during his 85thbirthday celebration. She is also a recipient of many awards.

She is no doubt one of the top ten influential celebrities in Africa (rated by Forbes Magazine). She is also a philanthropist and change motivator.  She had successfully helped in campaigning against most torturous illness, malaria: a disease she believes kills faster than AIDS in Africa.

Chaka Chaka who is married to Tiny Mhinga has an outstanding commitment, which she has used to stir up the participation of many Africans to combat HIV/AIDS and malaria from the continent.  She has helped put up sessions to enlighten groups, classes and individuals on HIV/AIDS, prevention and health sustenance for those who live with HIV. The music producer and actress with several roles on South African television dramas is committed towards tackling health issues through her foundation, Princess of Africa Foundation.

As a result of her humanitarian efforts, she has received several awards including the Rotary Paul Harris Fellowship Award, a special award from Roll Back Malaria, a body under the United Nations and the recent WEF award. The singer who has released over 20 albums also serves as UNICEF’s Goodwill Ambassador against Malaria and UN’s MDG Envoy for Africa.

Chaka Chaka is not just a health advocate, gifted singer, and celebrity but she is one of the few beautiful ones who were born at the time the world needed them the most.