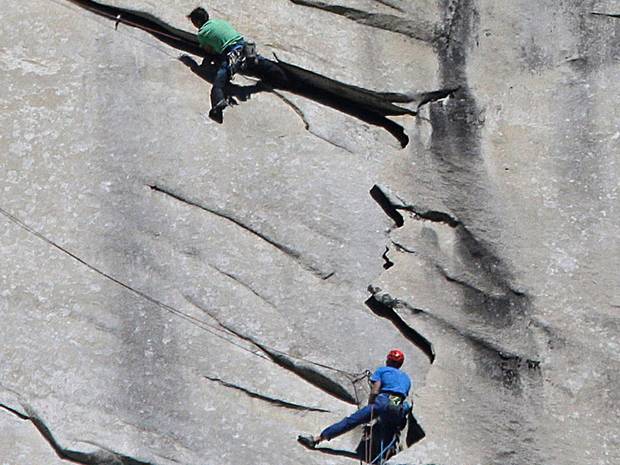 Two American climbers have become the first men in history to free-climb the south-eastern face of El Capitan in California’s Yosemite National Park, considered the world’s toughest rock climb. Tommy Caldwell, 36, and his climbing partner 30-year-old Kevin Jorgesen completed their ascent of the mountain’s so-called “Dawn Wall” shortly before 3.30 on Wednesday afternoon, after a 19-day free-climb, meaning ropes are used only to break a climber’s fall, not to assist in their ascent. The pair were met at the summit by a crowd of around 40 family and friends who had trekked the long way round: an eight-mile trail up the back side of El Capitan. Since the mountain was first scaled by climbers in 1958, others have ascended by several dozen routes. But until now, none had succeeded in defeating the Dawn Wall, a baby-smooth, approximately 900-metre sheer granite rock-face, so named because it catches the day’s first rays of sunlight.

“It’s the hardest rock climb in the world,”  said Leo Houlding, who became the first British climber to complete a free ascent of “El Cap” in 2012. Speaking to The Independent after Caldwell and Jorgesen began their climb on 27 December, Houlding explained: “You break a cliff like this into pitches, which are basically rope lengths. This is 30 climbs, one on top of the other. Ten of them are world-class standard and two are as hard as anything anywhere.”

For the past three weeks, Caldwell and Jorgeson have spent their nights in tents suspended some 350 metres up the wall. After free-climbing each day’s pitches, they used ropes to return to the base camp to eat and sleep, and then to rappel back to the last point of the ascent. According to The New York Times, Caldwell began planning the climb almost a decade ago, several years after severing his left finger in a DIY accident – an injury he feared would end his climbing career.

In 2000, the Colorado native made world news when he and three fellow climbers were kidnapped by militants during a climbing trip in the mountains of Kyrgyzstan. The group’s ordeal ended six days after their kidnap, when Caldwell pushed their armed guard over a cliff. The man was later found alive, while the climbers escaped to safety.

Jorgesen, originally from northern California, joined Caldwell’s quest to conquer the Dawn Wall in 2009. The pair’s first attempt in 2010 was called off due to storms. During a second attempt the following year, Jorgesen broke his ankle in a fall, while Caldwell’s continued ascent was finally stymied by one of the wall’s most notoriously difficult pitches.

Eric Jorgeson, Kevin Jorgeson’s father, told KGO-TV that his son has always been a climber, and watching him fulfil a long-time dream of reaching the summit of the Dawn Wall made him proud. “He climbed everything he could think of. It made us nervous early on as parents, but we got used to it,” he said. “It was more other parents saying, ‘Hey, your son is at the top of a backstop’.”