World Cup 2022: FIFA and Qatar have a ‘slavery’ problem 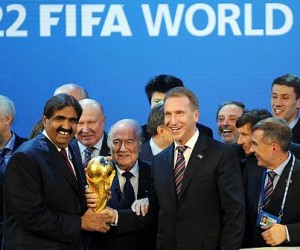 The 2022 World Cup set to be hosted by Qatar will likely go down as one of the most controversial ever and the world is still seven years away from its kick-off.

Following the awarding of hosting rights to Qatar, FIFA has been faced with intense criticisms and allegations of corrupt and underhand practices to ensure a winning bid for Qatar. The football body has also had to severely alter the global football calendar to accommodate the 2022 World Cup which will be played in November-December rather than June-July owing to intolerable summer temperatures in Qatar.

However, despite all of these issues, FIFA is faced with an even bigger issue: Qatar’s labour laws.

The country’s labour laws have been compared with slavery by various commentators and a few days ago, international workers’ unions globally agreed to come together alongside pressure groups to attempt to force FIFA into action.

Their game-plan, to force reforms in FIFA and highlight Qatar’s labour laws, is to pile pressure on FIFA’s corporate sponsors. Long-time sponsors such as Adidas and Coca-Cola as well as other such as Budweiser, Hyundai, McDonald’s, Visa, Gazprom and Kia will be pressured into, as the campaign organizers hope, asking FIFA to look into the situation.

Jaimie Fuller, a sports businessman, was recently smuggled into labour camps in the Middle East country where he gathered evidence of claims of terrible living conditions for workers in Qatar, mainly migrants. Fuller’s evidence has been documented into a short film called ‘The Hypocrisy World Cup’.

In addition, Fuller has sent out letters to FIFA sponsors saying that contributing large sums to FIFA contravenes their values and also provides implicit support of working practies in Qatar.

International Trade Union Confederation General Secretary, Sharan Burrow, a supporter of the campaign describes the lack of action on the issue as a conspiracy of silence.

“Qatar is a slave state. The discrimination, the racism, the denial of rights for 1.4 million migrant workers adds up to apartheid and a model of employment that is simply slavery. There is a conspiracy of silence by governments and major sporting and cultural institutions that allow it to continue. The world must not be duped by Qatar’s empty promises of reform. Fifa and its sponsors cannot wash their hands over what is happening. They have a moral responsibility to ensure that Qatar ends these human rights abuses now.”

With FIFA Presidential elections set for May 29, the next chapter for FIFA could well be beginning by trying to solve a new crisis.