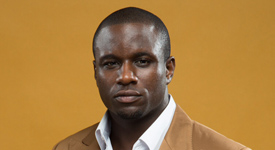 My name is Udoka Oyeka, I’m an actor and a filmmaker.

Q. Please take us through your background and how you got to (the country you lived in before coming back home)

A. Well I was born in Dallas, Texas but my parents moved back to Nigeria when I was just 2 years of age. I grew up in Nigeria till I finished high school, then moved back to Dallas for my University. I attended the University of Texas at Arlington where I graduated with a degree in Accounting. But during my sophomore year I took a theater elective and that birth my passion for performing on stage and in from on the camera later. After graduating I joined an acting studio in Dallas where we focused on acting for the screen.

Q. So, the big question, why did you move Back to Nigeria for good?

A. Funny enough, I moved back to Nigeria to do my National Youth Service Corp. (NYSC) so I was only supposed to be back in Nigeria for a year. While I was serving I met up with a friend of mine who had also moved back from Dallas and we wrote, produced and directed a feature film called The Red House Seven (ZR- 7)- which is about 7 friends in their first semester in a boarding school.

We both had never made a film and we both hadn’t gone to film school either, but I guess we were just driven by raw passion. Fortunately for us we had 2 distributors who wanted to distribute our films in cinemas across the country. Everyone loved the film and the concept of it and it was received with open arms. There the love of filmmaking started and I had a lot of Nigerian stories I wanted to tell so I stayed back and I’ve done 2 more films after that, all which have received nominations and traveled to different local and international film festivals .

Q. Are there similarities between the country you moved back from and Nigeria?

A. Well obviously there are similarities but it’s a very broad question. The similarities between the US and Nigeria are obvious so are the differences.

A. The main challenge honestly has been the lack of structure in some sections of the industry especially distribution. Both in the DVD market, which is plagued by piracy and the cinema chains, which we still, don’t have enough of. These are areas that aren’t encouraging to a filmmaker. Film is a capital intense business so if the channels for returns are not strong or reliable it becomes difficult convincing investors to invest in the industry .

Q. What were your expectations and fears when you decided to move back?

A. There really wasn’t any fear when I moved back, as mentioned earlier I was supposed to spend just a year but I adapt easily to any situation or place I’m in so there wasn’t any fear to say. It was that fearlessness that that helped me jump straight into making a film. I grew up here from the age of 2-16 so I already knew how the country works and what to expect from it.

When I decided I was going to stay here and build a film career I expected more from myself, to push the boundaries of what I could achieve. I have to do the hard work first before anyone can pay attention to my work or even appreciate it for that matter. So the expectations were more internal if I may say so.

Q. When did you move back and what have you been up to since you moved back?

A. I moved back in 2009, I shot my first film The Red House Seven (ZR-7) in 2010. The film was released in cinemas nationwide August 2011 as was nominated for the Africa Movie Academy Awards for Best Child Actor. In 2012, I shot a short film titled DOWN AND OUT, which has 3 nominations at the Africa Magic Viewer’s Choice Awards 2013 (AMVCA) for Best Short Film, Best Actor and Best Light Design.

Q. Coming back to Nigeria, did you ever feel like you needed to readjust to life back in the country?

A. Well it really didn’t take me that long to readjust, I think after the first few months I was back to my old self and had adjusted properly. I was away for about 9+years and visited only twice during that period, but after about 3 months or so, I was fully adjusted to life here in Nigeria. Honestly it’s a lot of fun and once you get your feet steady and you have your friends and family around it’s really lovely and easy living over here.

Q. How do you deal with issues such as traffic, lack of basic infrastructure and the power situation?

A. Those are things you adjust to mentally, I know when the traffic hours are and work my schedule around them, luckily I work for myself and can create my own schedule. Power had always been an issue and I had lived with that back in the day, the good thing now is that we do have an inverter and a big generator, so light is supplied in the house 24 hours of the day. It’s not the same for everyone but I’m lucky enough to have these equipments to make life and work easier.

Q. If you had to do this all over again what would you do different?

A. Absolutely nothing. I feel if I had never come back to Nigeria I wouldn’t have made the films that I have been able to make, I wouldn’t have gotten the audience that I’ve been able to build, my films have gone to major international festivals from Nigeria. These are things that would probably have taken me a decade to do from the States but I’ve done that in less than half that time.

Q. Finally, what advice would you give people moving back to Nigeria from the Diaspora?

A. Well, be sure it’s a move you want to make, be ready for the minor necessary adjustment and little frustrations, which will eventually pass. There are tons of opportunities in the country in every sector that needs the experience you’ve gained from whichever country you’re coming from. Be fully committed and dedicated to the move and place them in God’s hands and things will work out for you.