Tough Luck For Immigrants In Africa As ‘Xenophobia’ Goes Regional 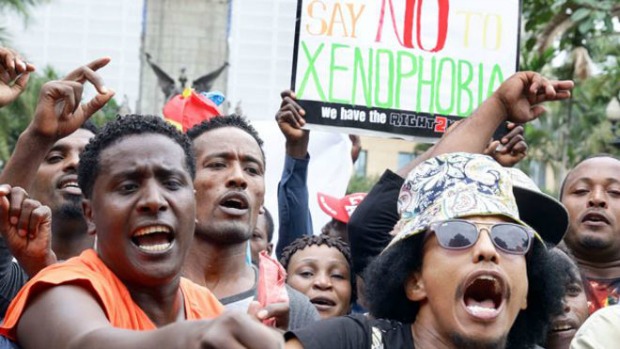 IT probably has never been a more inopportune time to be an immigrant in Africa than now. All around the continent countries are pushing back guests from other African nations, suggesting the integration dream has many kinks to iron out.

While the contribution of immigrants to host economies is relatively unchallenged, they are finding host countries with high unemployment rates and other social issues, for whom the solution is to look inwards first.

South Africa is the current enfant terrible for such push-backs, but it is hardly the only one; the difference being the xenophobic mob mentality that continues to leave death in its wake.

Its response to the attacks has come in for major criticism for targeting mainly foreign nationals in an ongoing crackdown, but similar responses in smaller economies such as the Republic of the Congo seem to have been missed.

South African authorities have framed the crackdown as targeting crime, but despite locals also being caught up in the dragnet, rights groups say the operation is essentially anti-foreigner, and has been cast by officialdom in an “us-against-them” language.

Operation Fiela, which the government says means “Reclaim” but which in the Sotho group of languages has a more nuanced meaning of “to sweep away” or to “remove dirt”, has been criticised for suggesting that African nationals need to be cleaned up.

The South African state is instead now accused of sponsoring xenophobia, from all quarters, including by former allies.

“Its timing [of the operation], coming in the wake of the violent attacks targeting in particular people of African origin, feeds into the misconceptions that migrants are to blame for all our social and economic ills,”  Zwelinzima Vavi, ex-secretary general of the Congress of South African Trade Unions, said in a rally at the weekend.

Pretoria denies the claims and says it has been successful at stemming the horror attacks, even as foreign governments including Mozambique said they were surprised by the resulting deportations, when they had expected more talks. President Jacob Zuma is scheduled to do some fence-mending during his visit to Maputo this week.

“We are satisfied that we have stabilised the situation and further loss of life has been prevented,” a government statement said on Sunday, after a meeting of the ruling ANC’s highest decision making body.

“Security agencies continue to work around the clock to protect both foreign nationals and South African citizens against any attacks.”

ANC secretary general Gwede Mantashe said the operation “should not be dictated by views of NGOs and civil society” terming such concerns as “narrow” and “extremism”.

Since the end of apartheid, South Africa has attracted millions of migrants fleeing political and economic turmoil in their own countries. Zimbabweans account for the largest population of migrants in South Africa, with some analysts estimating they make up 23% of the whole workforce.

With a youth unemployment rate of over 50% and a slowing economy, cheap foreign labour is a hot political issue, with locals accusing foreign nationals of stealing their jobs.

But while South Africa has borne the brunt of the harsh international spotlight, other similar African government operations, are flying under the radar.

The Republic of Congo last week launched the second phase of its operation “Mbata ya bakolo,” which in the local Lingala language means “the slap of the elders”. Some 600 foreigners were arrested over only two days.

The first phase, carried out in April 2014 in the economic hub of Pointe-Noire, forced back an estimated 250,000 workers from neighbouring Democratic Republic of Congo in only a few weeks.

Churches and local charities say the operation was now a “full-blown manhunt” and employed violence and degrading treatment. Congolese authorities would not comment.

The conflict-ridden DR Congo ranks last on the UN development index, and over the years tens of thousands of its nationals have found menial jobs in neighbouring Congo, where living conditions are slightly better.

Official figures from Kinshasa in April showed around four million residents in Congo, equivalent to around one in 10 of the population, hailed from DR Congo.

Nigeria has in recent years deported thousands of foreign immigrants, citing concerns of infiltration by Islamic extremists – though it protested the recent xenophobic attacks in South Africa. The country’s porous borders and lenient immigration officers have seen thousands of foreign workers easily move in, especially from Niger in the north, but also from Ghana, Chad, Benin and Cameroon, seeking to earn a better living.

Immigrants now make up a significant part of the menial labour workforce in Lagos.

But the country’s battle with terrorism has seen them targeted by authorities, with some 22,000 deported in 2013, while a crackdown was also carried out ahead of its March election.

Niger early this month deported more than 3,000 Nigerians fleeing Boko Haram, with refugees saying they were forced to walk back over three days after the insurgents attacked an island in Lake Chad.

Niger is home to more than 100,000 other Nigerian refugees fleeing the militants.

West African borders tend to be most porous, with emergent economies such as Ghana and Ivory Coast particularly popular with immigrants.

In East Africa, Kenya has been a preferred destination from Somalis and South Sudanese fleeing conflict, but this year threatened to close the world’s largest refugee complex after deadly terror attacks by Somali militant group Al-Shabaab.

But there have also been reports of friction with locals over the high visibility of Somalis in key areas of the economy, such as retail and real estate, a perception of illegality that peaked during the surge in piracy in the Indian Ocean.

However, findings elsewhere suggest African attitudes towards immigration, often framed in economic terms, are yet to be studied conclusively.

In a study two years ago, the Migration Observatory at the Oxford University found that opposition to migration into the UK was based more on a perceived threat to cultural values than an economic one.

The rather counter-intuitive study by Yvonni Markaki and Simonetta Longhi of the University of Essex also came up with an unexpected finding; that Britons were more likely to view immigrants positively if the Britons themselves had higher levels of unemployment.

But if immigrants exhibited higher levels of unemployment, they were more likely to be viewed negatively.

Essentially, opposition to immigration in that country was based more on a perceived threat to group identity, than on competition for resources.

Research findings closer home may resonate—studies found that South Africans were by a distance more favourable of immigrants from culturally akin Botswana, Lesotho and Swaziland, while those from the more diverse Congolese, Nigerians, Somalis and Ethiopians fared poorly in perception.

While South African demographics provide a richer template for such studies, it is not so clear cut in areas such as the two Congos, where the Bakongo people are ubiquitous. It is an area that requires more research, while showing that Africa can be complicated when it chooses to be.