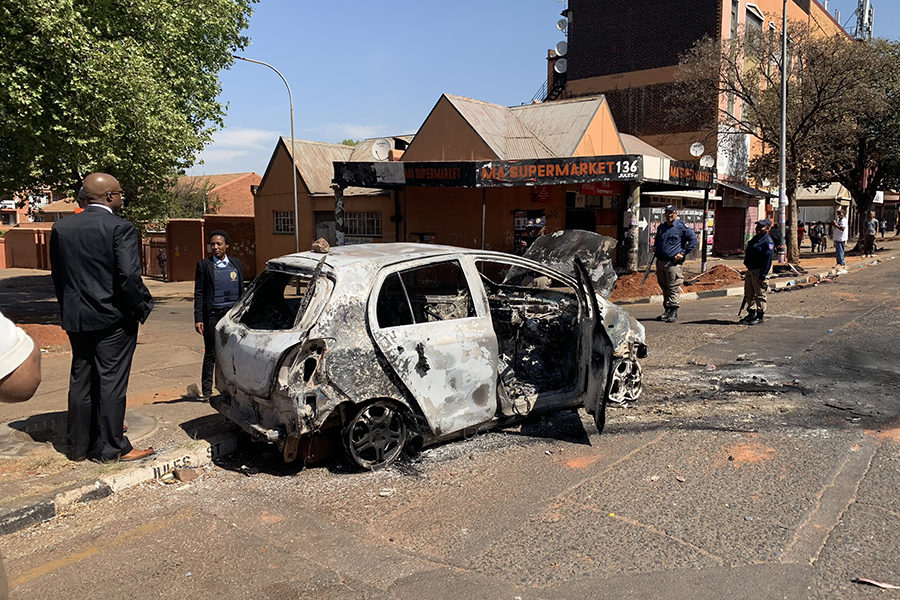 Like many of the hundreds of Nigerian returnees who recently fled the xenophobic-driven attacks in South Africa, Bisi Aremu has very few fond memories of her time in the Rainbow Nation.

Aremu lost her studio to the violence targeting foreigners which gripped South Africa for the past four weeks, leaving scores dead and thousands fleeing into neighbouring eSwatini, Lesotho and Mozambique.

Aremu, a mother of three who lived and ran a salon doing manicure and pedicure in Johannesburg for close to five years, has lost everything she worked for.

According to her, foreigners who were thought to have done very well for themselves became the targets of the xenophobic fury of mostly jobless South African youths who move from place to place pointing out foreigners and attacking them.

“I just woke up one morning and thought it was no longer safe to live with the situation” she said, her voice creaking with an admixture of anger and frustration.

Aremu and the hundreds who made it home to Nigeria consider themselves barely lucky because they escaped and told the tales of living dangerously in South Africa, a country they thought should have treated them better given the history of how the rest of Africa helped to liberate it from the evil clutches of apartheid.

Since the first outbursts of xenophobic violence began in South Africa over eight years ago, Nigerians have been the hardest hit, with their death toll topping 118 citizens since 2016.

Aside from the deaths, the loss of property, including Nigerian-owned businesses in South Africa, has been estimated to run into tens of millions of dollars.

Local gangs especially in Johannesburg neighbourhoods have been wreaking havoc on such businesses, going on a burning and looting spree.

Nigerians in that county have watched with incredulity as their homes and businesses were targeted with near-impunity, confused by the irony that their own country had played a major, even starring role in banishing apartheid from South Africa and emancipate the majority blacks from the death grip of white minority rule.

Nigerians at home have launched attacks of their own as reprisals against South African business interests, including Shoprite malls.

Many Nigerians see the attack on their compatriots in South Africa as a campaign of a violent witch hunt orchestrated by the authorities in Pretoria to force foreigners out of their country.

South Africa on the other hand denies this, arguing that criminal gangs are the culprits, provoked by the unseemly activities of the victims.

Hundreds of Nigerians who can no longer bear the brunt continue to leave with Air Peace airlines volunteering to airlift them to the safety of their own country.

In all no fewer than 1 005 have voluntarily decided to leave but only 502 have so far been repatriated in batches over the last two weeks.

Uchenbi claimed that jealousy was the driving force behind the attacks on Nigerians by South Africans who have little or no idea how to compete with them in business.

“They are hostile, very hostile and for no reasons’’ he said.

Uchenbi, who had married a South African and lived in the country for 12 years, said he had to leave his only child from that marriage behind to flee the attack on his neighbourhood.

Another returnee, Chuks Okoma, who has been in South Africa for six years said he cheated death and would not gamble with his life again.

“For the period I stayed in South Africa, I had no job, no home. I was a street boy. So, what am I doing there when I have a family in Nigeria?’’ he inquired.

“South African gang members are involved in drugs and are competing with other foreigners. Sometimes they set the foreigners on fire. The police just look on, happy over the situation. For me, I was done with witnessing this’’ he added.

“I regret my stay in South Africa”, Juwon Sadiku, a businessman retorted.

With eyes showing fear, Sadiku added: “It was a narrow escape. It was terrible. We barely escaped with our lives. Those people are wicked. They search from house to house looking for Nigerians. The police are instigating them in Pretoria. There is still apartheid in South Africa – a case of blacks against black foreigners.’’

Rose Uwadiae from Nigeria’s Edo state lived in Pretoria for six years and shared two children with a South African.

“But I have not been spared. Even my children were targeted with abuse which was sometimes violent” she said, as the sinews in her neck showed her anger.

“I have to provide an affidavit to disown the paternity of the children before I was allowed to leave that hell called a country with them’’ she added.

“I have had to part with some clothes to bribe the police for no reason. My shop was looted many times over. They were coming for my life, so I had to leave’’ she said.

Meanwhile, commenting on the situation, Chris Ndibe, a consultant on Economic Free Zone, asked whether the African Continental Free Trade Area (AfCFTA) would have any chance to take off and succeed if Africans far from seeing other Africans as their own, attack them for being foreigners in their country.

He said that the free trade deal launched in Niamey in Niger Republic on 7 July 2019 was always going to be a charade.

“The xenophobic attacks in South Africa have been going on for more than two weeks and we cannot see anything visible from the African Union (AU) the main driver of the AfCFTA. This is the beginning of failure of the African unity project we so regularly talk about’’ he said.