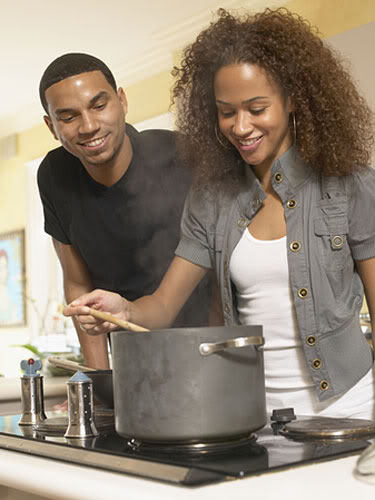 Cooking for my family has turned out to be one of the most rewarding and bonding experiences of fatherhood, so I am constantly surprised at how many men still actively avoid the kitchen.

After all, when it comes to outdoor grilling, we men seem to be in our element. I mean, what guy doesn’t get a thrill out of throwing down coals, dousing them with lighter fluid and setting them ablaze? Why is that such a rush? Is the exhilaration of witnessing flames drilled into our DNA? Or is it simply that inhaling the sweet scent of charring meat takes us back to our caveman ancestry?

How is it that while we are masters at the grill, we seem to be intimidated by the stove?

In my opinion, these are the reasons men can’t stand the heat in the kitchen:

1. Recipes are like driving directions — and we all know how guys respond to those. We need to understand basic concepts first and then work out the rest on our own.

2. Men don’t like unfamiliarity. In fact, we cannot tolerate the state of “not knowing.” So, unless you were lucky enough to have a mother or father who took you into the kitchen and taught you the way around, these are uncharted waters. It’s like being lost in the jungle. (See reason 1 for why we can’t get out of the jungle.)

4. Fear of failure. Cooking is a brand new endeavor for many of us and it’s possible that we won’t be any good at it. If there’s one thing men hate, it’s failure. For me, I’d like to be able to do Yoga, but I feel like the village idiot in one of those classes when I can’t “bow to the sun.” While others stand on their heads with grace and ease, I would twist and contort like a Bavarian pretzel in a pool of my own anxious sweat.

5. Bros are often commitment phobic. But cooking doesn’t take nearly as much time as foreplay. Believe me, you can whip up an orgasmic omelet in the same time it takes to toast a frozen waffle.

6. And ultimately, there’s the anxiety that dares not speak its name: fear of the feminine. Though most of the world’s top chefs are men, somehow, dudes still associate oven mitts with elbow length gloves. Frankly, it’s far more acceptable for women to assume masculine roles than it is for men to assume the feminine. If cooking appeals to you, you need to get over the association that it’s women’s work. It’s Gordon Ramsey, Jamie Oliver’s and Anthony Bourdain’s work too, and they are definitely not women.